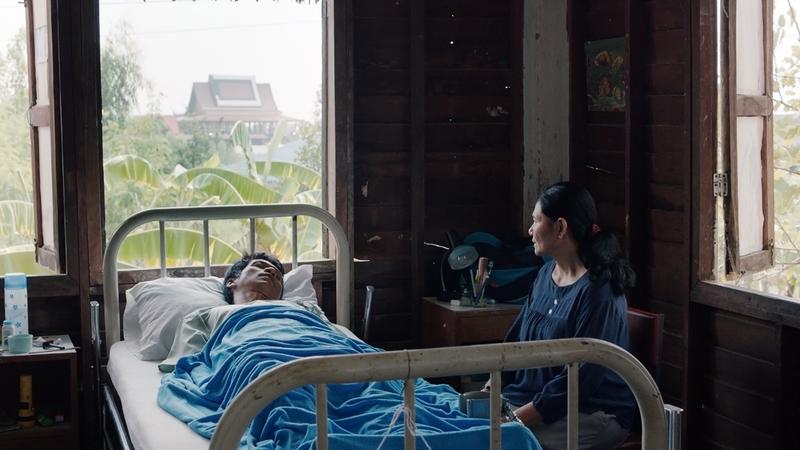 On some level, the films of Apichatpong Weerasethakul have all been concerned with the inherent tension between subjects defined in opposition to each other. This tension is evident between the spiritual and corporeal in Uncle Boonmee Who Can Recall His Past Lives (2010), the sublime and the everyday in Blissfully Yours (2002), or the rural and urban in Syndromes and a Century (2006). From its title alone, Cemetery of Splendour, Weerasethakul’s latest film, fully embodies this tension.

Set in Weerasethakul’s home town of Khon Kaen, the film follows Jenjira (Jenjira Pongpas) as she volunteers at a school-turned-temporary-clinic for soldiers suffering from a strange form of sleeping sickness. There, she befriends a patient named Itt (Banlop Lomnoi) as well as Keng (Jarinpattra Rueangram), a psychic who helps visitors communicate with the comatose men. In line with Weerasethakul’s unique brand of magical realism, the film is filled with dreams, visits from spirits and magical digressions all connected somehow to the ancient site beneath the former school.

If Cemetery of Splendor finds Weerasethakul in a familiar mode, it’s because the film is knowingly self-reflexive and deliberately includes various callbacks to previous works. A shot of Itt on the hospital bed and visit from two spirits recalls Uncle Boonmee. Furthermore, the lotion in Blissfully Yours makes an appearance as does the tender fist-licking in Tropical Malady (2004).

But Weerasethakul isn't being self-indulgent. Rather, he uses these elements to cannily explore the essence of memory and the myriad ways in which the past informs the present and vice versa. He explores not just how the images and scenes relate to each other, but also how our own history factors in which lets the film resonate far beyond any given moment. The film becomes a palimpsest of image and sound that’s practically suspended in time.

One of the film's most stunning moment is a double-exposure shot that layers an overhead view of a series of escalators with a shot of the room of comatose soldiers bathed in coloured light. It’s fitting that it literally superimposes modern reality and shifting dreams. Another such moment gives the audience a simple shot of the sky. Just when the stillness of the moment holds us rapt, what looks to be a giant amoeba floats across the frame. It’s an enchanting scene in a film that brims with wonder.

If Cemetery of Splendour has a flaw, it's that it doesn't chart new territory for Weerasethakul. Needless to say, it remains a uniquely beguiling experience particularly for those already familiar with his films. Given its scope and reflective concerns, Cemetery of Splendour feels like a natural endpoint of a certain phase in Weerasethakul's career. It’s an ideal culmination of a truly singular body of work which only makes wondering about what Weerasethakul will do next that much more exciting.