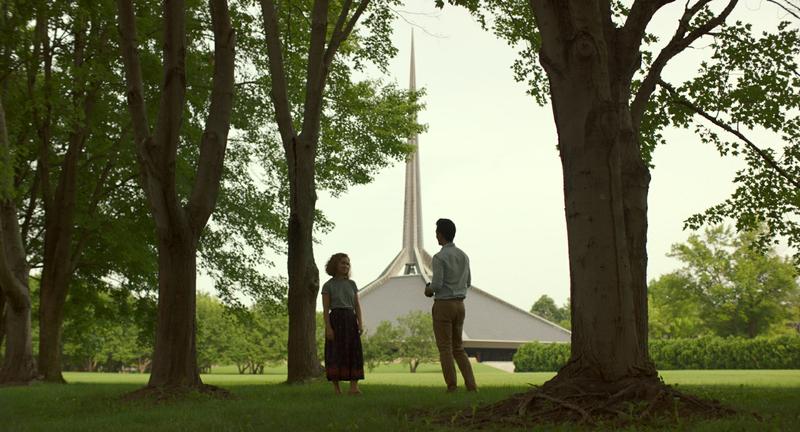 Anyone who has seen “Tokyo Story” will see many of its influences here. Courtesy VIFF

As an avid fan of the growing video essay industry it gives me great pleasure to say that one of its most passionate and long running creators, Kogonada, has made an admirable transition to the feature film in his pleasant little debut, Columbus.

He’s come a long way, having previously made film-analysis shorts for the Criterion Collection and Sight & Sound magazine. Paralleling the trajectory of the likes of Francois Truffaut, Kogonada’s love for the craft was too much for just educational critical analysis. He is clearly trying to show everyone up, creating a film with a unique style all its own — a somber tone poem about parental failings, the uncertainty of the future and architecture, lots of architecture.

Columbus Indiana, for those who don’t know, is considered by many to be an architectural Mecca — a place where some of the most innovative architects of the 20th century congregated. The town itself is one of the film’s stars, its Modernist designs and their authors both the backdrop and frequent topic of discussion among our leads. It is here we meet Jin, (John Cho) a Korean-born man who begrudgingly travels to Columbus to care for his estranged father who suffered a recent collapse.

Jin’s father is a phantom – a man whose face is never seen but who’s presence hangs over Jin throughout the film, as he struggles with the responsibility of caring for a neglectful parent. Accompanying him along the way is Gabriel (Parker Posey), an old friend and his father’s star pupil, who provides moral support with a tenderness that implies a long-complicated history between the two.

Lastly, there’s Casey, a high school grad floating around town while working at the Cleo Rogers Memorial Library, where she has a chance encounter with Jin. He is several years older than her but the two immediately strike up a conversation and treat each other as intellectual equals. Jin admires Casey’s passion for architecture, prompting her to tour Jin around town, showing him her favourite buildings and ruminating on the philosophical ideas their creators imbued them with.

However, beneath the surface of these conversations, there is a shared undercurrent of sadness and pain. Like Jin, Casey’s suffered under a less than ideal parent – her once meth-addicted mother – whom she continues to care for even if it means putting off any plans for college.

Jin encourages Casey to pursue a career but she fears what will happen to her mother without her. Together, their conversations serve as a process of both challenge and comfort. Never loud but always pushing each other’s boundaries, the two share a fascinating relationship that managed to suck me in despite the film’s somewhat glacial pace.

It should be noted that each of these conversations, as well as the film in general, are framed almost entirely in meticulously angled static shots, only further adding the to the film’s mellowness. There are less than 10 camera moves throughout the entire run-time, the first of which is executed with brilliant subtly, cueing us into the small beginnings of a relationship — one that starts with the tried and true method of bumming for a cigarette.

When limiting one’s filmmaking parameters to such an extent, composition and editing are king, and Columbus does not disappoint. There’s a plethora of serene one-point perspective and passageway shots that, along with the rhythmic editing, lull the audience into peaceful hypnotic state. Kogonada is not afraid to bore some audiences with his patience and affinity for stillness, such as when Jin stares into a closet, tepidly reaching to try on his father’s old hat. Meanwhile, some key conversations are even framed almost entirely with mirrors, heightening the intimacy of the characters by keeping the audience at a distance.

Of course, when I say Columbus' style is unique, I simply mean compared to other contemporary movies, because if you’ve watched any of his video essays you will soon realize that Kogonada rips wholesale from the playbook of one of cinema’s oldest mavericks: Yasijiro Ozu.

I’ve only seen one Ozu film, Tokyo Story, but the memory of that experience continues to stick in my mind to this day. To Kogonada’s credit, he effectively re-creates that same feeling of wonder and existential ennui that Ozu excelled at, all while telling a very similar story about relationships and strained familial bonds. Ozu’s trademark pillow shots also feature throughout the movie, further familiarizing us with the town’s many exquisite bridges, buildings and sculptures, immersing us in the sounds of everyday life as cars, skateboards and pedestrians move past the camera.

Columbus isn’t likely to be a game-changing movie, but it is quality update on an old, uncommon style of filmmaking and a thoughtful diversion from the standard crop of dramas today; one that it isn’t afraid to hold on a lingering silence while we stare ponderously at the world around us.