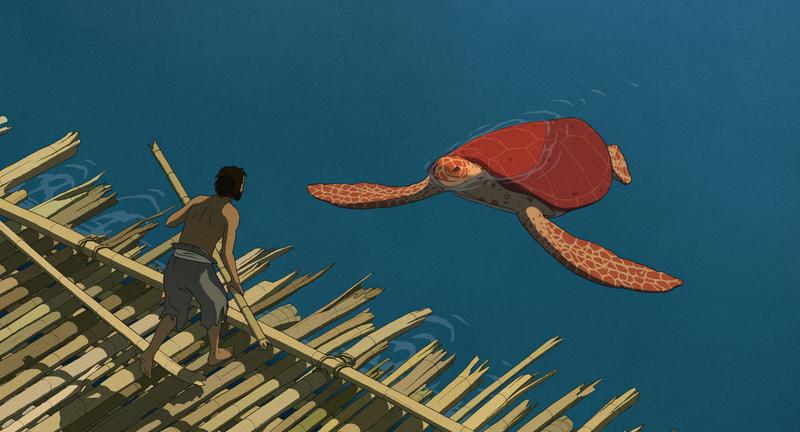 Straight from the opening shot, The Red Turtle tosses us into the blue, immersed in the violent, overwhelming, moving-tapestry of a storm. It is here we meet our nameless protagonist who soon washes ashore on a small deserted island. Reminiscent of Tom Hanks in Cast Away, we the audience learn to empathize with this man as we watch him tackle the basics of survival step by step — through every frustrating failure and small success. Unlike everyone’s favorite dad, Tom Hanks, we know nothing of this man — who he was, how he got here. We don’t even hear him, or anyone in this movie for that matter, say anything beyond various unintelligible grunts and yells. None of that backstory matters however. From the moment he takes his first step, the island is his life. It is all he and the audience will ever know. It's not much time before he attempts to build a raft and escape the island, only to find his plans foiled by the titular red turtle that bars his way. Through a short series of events I won't spoil, the man discovers that though he is trapped, he is not alone on the island after finding himself in the company of a beautiful and mysterious red-haired woman. The rest is history.

The Red Turtle is a stark, beautiful portrait of one man’s life and his relationship with the world he inhabits — that being nature, his family and the world he creates. A tale that is purposely made to be universal and transcendent of language barriers, it makes sense to learn that it was brought to us by the collaboration of two animation masters — Studio Ghibli (supported by its international seller, Wild Bunch) and longtime animator Michaël Dudok de Wit, in his directorial debut. You can see the influence in each’s style as they craft something both wholly familiar and unique. Several times throughout the film, I was surprised as what I thought was a static background painting started to move, especially in the the forest scenes. Though arguably less detailed than most traditionally animated films, the careful composition, various hues and expert use of silent-era story-telling techniques ensure there’s nary a wasted shot. It’s all in the service of simplicity and elegance.

Its lack of dialogue may prove difficult and boring for some, but this restraint not only reveals the universality of the film's message. It also serves as an immersive, almost spiritual, experience. The calming score combined with minimalist yet expressive animation truly transports you onto the tropical beach, charmed by the emotion of the characters and the beauty of the island, as well as the wildlife that inhabit it. This is especially true of the cute little sand-crabs, who always garnered laughs big and small — constantly curious as to the nature of the strange giants that walked among them — and other times a little too unaware of the birds of prey swooping down to find a snack. The latter joke goes to show the honesty that is present — this is Studio Ghibli after all. The pure enchantment has a strong undercurrent of somberness as we see the cycle of life and death play out in various forms — humans, animals, plants.

I don’t know if I’ll be eager to revisit Red Turtle soon. That is not a point I make against the film — quite the contrary in fact. It is a film I think most should see in small doses, across various years of our life. I think most of us at UBC can only see ourselves in the character of the son — only having just left the islands we call home and family. I’m curious to know how this film makes me feel 10 years down the line, when I can relate with the perspective of a person having just found an island of my own.