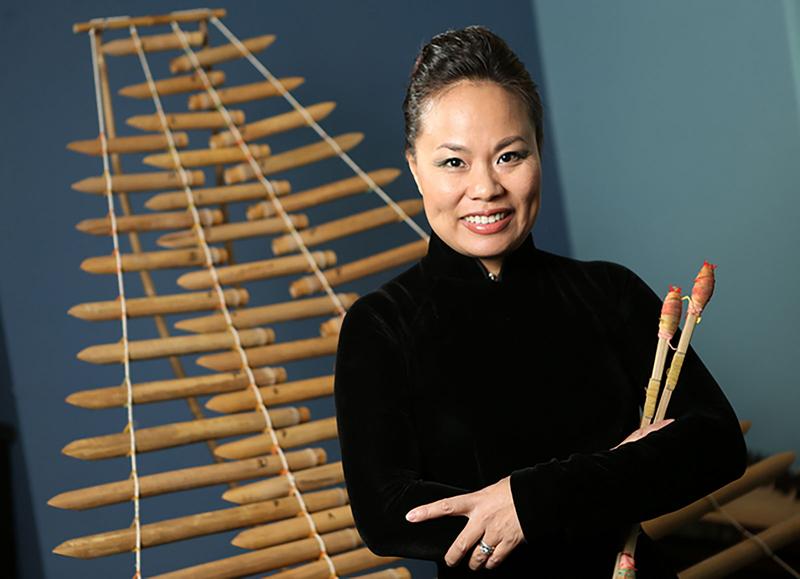 Vân-Ánh Vanessa Võ’s fingers moved like small ants, scattering all over and burrowing into the bamboo of the đàn tranh — a 16-stringed instrument from Vietnam. They crawl across the neck, dipping and diving within, drawing forth what I imagine you might hear at the pearly gates. It's wonderful. And yet Vanessa apologizes, saying that it was merely practice and not perfect, as she has to warm up the strings and get in tune before the main performance. It was a sign of things in store — beauty coming from simplicity — with the performances of Võ and Bic Ngoc Hoang transcending any expectations I had going in.

In Bamboo, a concert presented by the UBC school of music and the Vancouver Inter-Cultural Orchestra, we were taken from the Barnett Hall on a journey through Vietnam — from the regional sounds and styles of the North, through the peasant work songs of Vietnam's Central Highlands, to the love songs of the Southern Coastal Area. Our guides were the immensely talented Hoang — it was something of a homecoming concert for her, considering she has previously taught music at UBC — and Võ, whose soundtrack work has won her Emmys and Oscar nods.

Whilst I cannot doubt their individual achievements, their chemistry as collaborators produced something truly revelatory — a concert in which dong dao children's songs were performed on the K’ni (a mouth fiddle — I can’t explain it any other way) with the same gusto as the epic Trống Quân love songs. The penultimate track of the concert even fused atmospheric trip-hop, lavish Vietnamese instrumentation and a range of vocal stylings to produce something that fuses the analog and the digital, creating something that sounds like neither. It used elements of each, but couldn’t be defined as Vietnamese folk nor Western-styled music, and that experience alone was worth it.

Through an exploration of Vietnamese Bamboo on a western stage, Hoang and Võ redefined what we think of as folk music and even Vietnam. Like the ants that feed off bamboo, the mastery of each performer fed off the diverse traditions of folk instrumentation and form from all regions to sustain the music's life beyond Vietnam and in a modernizing world. While Hoang and Võ seemed satisfied, I was left hungry for more.