Our Campus: Angela Crane’s got chemistry 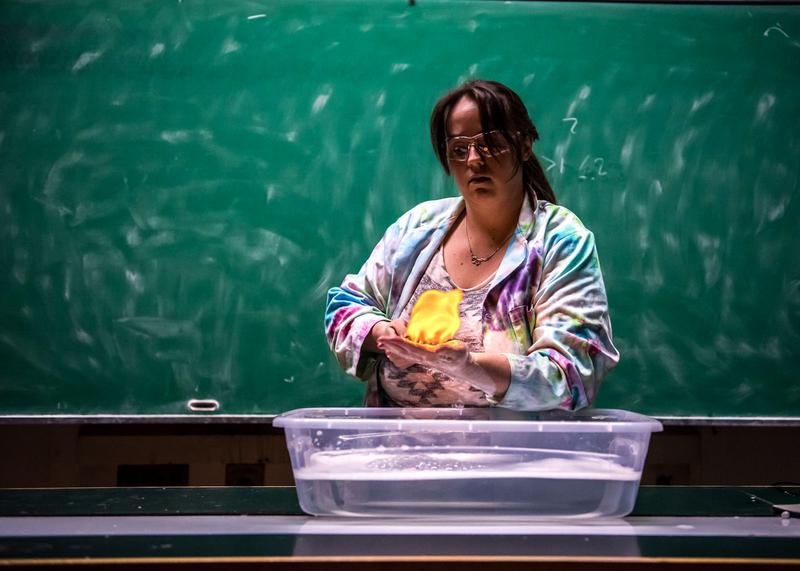 First-year science students will know Angela Crane by her tie-dye lab coat and the enthusiasm in her voice in anticipation of a reaction about to take place in the chemistry lecture hall’s fume hood.

In addition to lecturing, Crane performs all the demonstrations in first-year chemistry courses at UBC. For almost every topic covered in class, Crane consults a large book of demos and performs the most “flashy” and memorable for students.

“Reading books or listening to the lecturer and writing notes — those are all great tools, but there needs to be a sticking point,” Crane said. “Demos make a point stick.”

“Sure they're lots of fun and I really like blowing stuff up, that's true,” she added. “[But] I like that the demos can be used in the class to even further knowledge.”

It was a first-year chemistry professor at Memorial University in Newfoundland and his memorable demonstrations that led to Crane’s decision to pursue chemistry.

"There was one that he did ... it's a shock sensitive chemical so he just poked it and it just went BAM!” Crane recalled. “It scared the crap out of all of us.”

The moment stood out to Crane because it was so unexpected, yet reinforced what she was learning in class. Working alongside a professor in a research lab in her second year of university only intensified her interest and set her on the path to making chemistry her future career.

“We were doing air sensitive chemistry, so you could never just take out your chemicals on the bench and do [an experiment]. You always had to put it under a vacuum, fill up the vial or whatever with nitrogen and then do it all under closed atmosphere,” Crane explained. “Learning how to manipulate the chemical equipment was like a puzzle, having to twist knobs and flick switches just to get your reaction to happen in an air free environment. I remember just thinking it was the coolest thing.”

Outside UBC’s classes, Crane is involved in the chemistry department’s outreach, performing demonstrations for schoolchildren and kindergarten classes. The role came to her naturally. As a girl guide leader, Crane was already organizing activities that would introduce the girls to science at a young age. She was also already a seasoned performer.

"In high school, I was on an improv team and we went to nationals twice.” Crane said, noting that improv taught her how to think on the spot and recover quickly when her demos go awry. “Being up in front of people and performing really doesn't bother me so much.”

Presenting chemistry to a non-academic crowd comes with its own set of challenges. "Sometimes it's tricky trying to explain what's happening in a demo without using special terminology,” Crane said. “But it's, again, kind of like a puzzle — fun to figure out.”

“There are demos that I do for [first-year chemistry] that I do for kindergarteners and they get just as much out of it as an actual first year student because of the language you use," Crane said. “It's surprising how much little kids retain, particularly when you blow something up.”

As a graduate student, Crane stayed at Fort Nelson for a month as a “live-in scientist.” She demonstrated chemistry reactions at the six schools in the region and organized hands-on experiments for the students. For the last two years, she has been training other graduate students to do the same. She builds new programs and labs each year like soap making and food chemistry labs resulting in edible products.

"They don't have a Science World that they can just go to,” Crane said of the Fort Nelson student community. “So having someone come in like that is really special.”

Outreach for children isn’t the only way Crane brings chemistry outside the lecture halls and labs of UBC.

“The other cool thing that my job has allowed me to do is work with film companies,” Crane said. “So like whenever a TV show needs chemistry equipment or needs advice on how to make a reaction look real, I've actually gotten to be the on-site chemistry advisor.”

“They're learning what to do to put these fires out, but they've never actually seen those types of fires,” Crane explained. “So I make them. I just set things on fire to show them what could happen.”