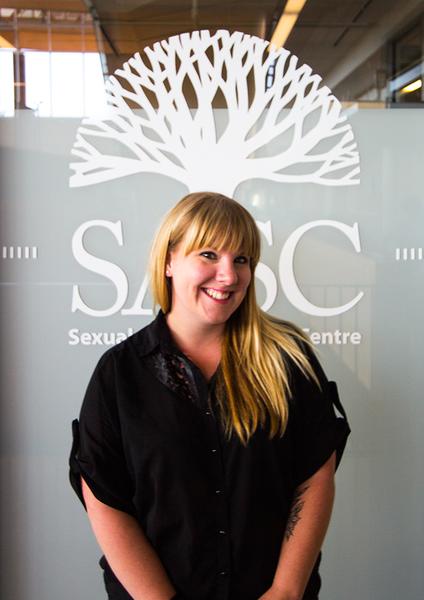 After four years at the helm of the AMS Sexual Assault Support Centre (SASC), Ashley Bentley is “joining the dark side.” She leaves behind a legacy of positivity, success, hard work and above all, compassion.

On September 30, 2016, Bentley left her role at the SASC to take on a new role as the sexual assault intervention and prevention advisor for UBC through the VP Students portfolio. “I think the new role will be a really good opportunity to continue some of the work I’ve been doing at the SASC and advocate from within the system for change.”

Since graduating from Southampton Solent University with a bachelor’s degree in media and cultural studies, Bentley has constructed a career in the field of social justice. “I’ve worked with organizations such as [Women Against Violence Against Women], Wish Drop-in Society and Open Door Group. Really, most of my work has been about working with marginalized communities which have been affected by trauma to look at creating cultural change of some kind.”

Her work brought her to Vancouver in 2010 and in January 2013, Bentley found a new home at the SASC. “I love working with post-secondary campuses. I love connecting with students and being a part of this vibrant community, where you get to do a lot of learning and also a lot of unlearning.”

Bentley has been extremely successful in her role as SASC manager. “When I first came to the SASC as assistant manager almost four years ago, we were an incredibly small team. We had two full time staff members and one part time student staff member.” Bentley sought additional funding through partnerships and grants, and “now, for the first year ever, we have nine staff here at the SASC and 35 volunteers.”

The level of client engagement at the SASC has also skyrocketed. “In terms of what we were seeing last year from 2015 to now, our numbers are doubling. A part of that is the reality that not more people are being sexually assaulted, being harassed or experiencing violence on campus, but that people feel that this is a safe place to come. They can be heard and we can support them.”

While the SASC will miss her sorely, Bentley’s promotion comes at a critical time, as UBC’s new sexual assault policy is currently under final review. “Currently on campus, the existing policy (Policy 3) doesn’t specially address sexual assault. The way it currently stands is more applicable to situations of harassment or discrimination. My hope is that we will be looking at alternative approaches to reporting, [and also] at education for folks who are causing harm … that is beyond just discipline.”

Bentley has prioritized support for survivors of sexual assault, but she believes that the education of perpetrators is just as important. “The research that currently exists suggests that folks that cause harm do so on a repeated basis and it’s intentional. Through my experiences at the SASC and what I’ve beared witness to, that’s not always the case. Because of the lack of consent education that takes place at the high school level, folks that are causing harm might not recognize that they [are] and that’s a part of rape culture.”

While Bentley believes it is important “to recognize that anyone can be a survivor and anybody can also cause harm,” violence is committed “predominantly against marginalized women.”

The research certainly backs Bentley’s claim. “When we look at the statistics, one in five women will experience violence during their campus experience. It’s not just affecting women, but in terms of who we see accessing our services at the SASC, it is predominantly female identified folks.”

Bentley went as far as to say, “I think there are certain traditions, certain groups on campus that promote that type of culture as well.” While Bentley declined to name these campus groups, she highlighted the research of Rachel E. Sullivan, equity facilitator at the Equity and Inclusion Office. “Looking at that research, I would say that some of those hubs that were indicated within that research are pretty indicative of what we see and hear at the SASC as well.”

Sullivan’s research calls out on-campus residences, the Pit Pub, as well as fraternities and sororities as locations where members of marginalized communities face the highest factors of risk with regards to sexual assault and violence.

While good work is being done through organizations like the SASC, Bentley feels that more resources need to be directed at addressing the problem of on-campus sexual assault. “When I say that sexual assault is an epidemic, I don’t say that lightly. We’re seeing an increase in the number of people accessing [the SASC’s] services. In terms of creating that cultural change and making sure that survivors and people who have caused harm are getting the support they need — we do need more.”

The SASC welcomes all members of the UBC community with open arms. “We provide support services to folks who have experienced violence on campus and our services are available for people of all genders.”

If you or a loved one has suffered a traumatic experience, please do not hesitate to contact the SASC for support.

A previous version of this article reported that Bentley worked with WAVER, came to Canada in 2009 and was employed by the SASC in 2011. The Ubyssey regrets these errors.