Our Campus: The “Surrey Tampon Trio” delivers hygiene products to your doorstep with ElleBox 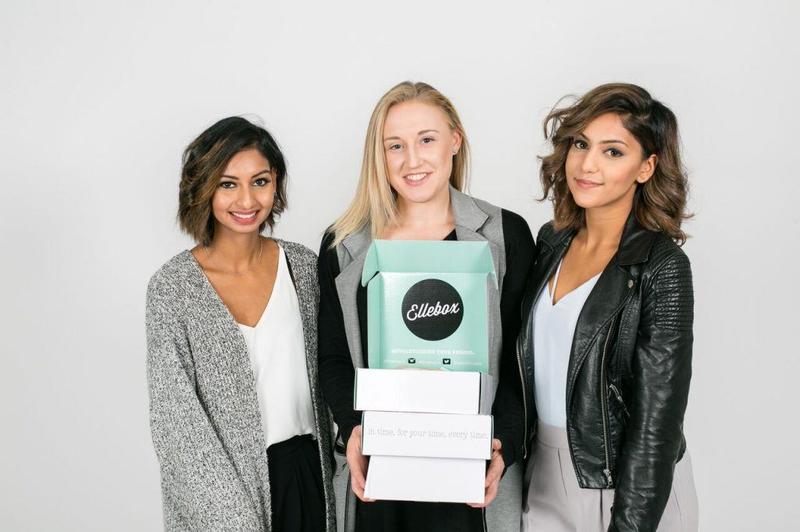 ElleBox provides a monthly subscription alternative to feminine hygiene products, and is owned and operated by UBC students and alumni. Since officially launching their service in January 2016, Jessica Bilmer, Bunny Ghatrora and Taran Ghatrora have had their business accepted into several accelerator programs and even featured on the CBC program Dragon’s Den.

The business markets the Necessities Box — a customized combination of pads and tampons delivered to your doorstep for a monthly subscription fee of $10. The Comfort Box, which adds tea, chocolate and two self-care gifts on top of the Necessities Box, costs a monthly fee of $35.

Taran conceived the idea for the company while studying law in England. She immediately  contacted her younger sister Bunny and long-time friend Bilmer to lay the groundwork for ElleBox.

“I realized that there was a subscription service for almost everything and we get our periods every month, so it just made sense,” said Taran.

After finishing her degree, Taran came back to Vancouver to pursue a master's degree in law at the Peter A. Allard School of Law. With Bunny, who is enrolled in accounting at BCIT, and Bilmer, a recent UBC kinesiology alumnae, she launched the beta ElleBox service in September 2015.

“We bootstrapped it and we did put some of our own money into it, but the nice thing about our business is that we get the payment up front and go buy the product to fulfill the order,” said Bilmer.

Back then, their website was unattractive and orders shipped in a basic cardboard box. Despite this, a rave blog review and a local newspaper article hailing them as the “Surrey Tampon Trio” helped successfully launch the service, attracting the first 60 customers.

The trio believes that their service has a clear edge on traditional hygiene brands found on grocery and pharmacy store shelves due to the 100 per cent organic cotton in their products.

“You can only get [organic] pads and tampons at Choices’ [Markets], and they’re a rip-off. If a woman wants organic tampons and Choices’ is far away, you can’t just walk into a gas station at midnight and pick them up. But if they’re on auto-renew with us, they’ll always have enough for when they need them,” said Bilmer.

However, reaching a large customer base has proved difficult, as menstruation can be an uncomfortable subject to openly discuss. Despite this, they have lofty ambitions.

“We would like to be the Dollar Shave Club of feminine hygiene. We want to reach a million women and educate them abut the benefits of organic tampons over traditional tampons,” said Bunny.

The company has grown at a rate of approximately 10 per cent per month since officially launching in January 2016. This was thanks in large part to being accepted into The Next Big Thing accelerator, a charitable program spearheaded by Hootsuite founder Ryan Holmes.

“The one small step of starting is literally the hardest, and after that, people will rally to help you. If you put the work in, things fall into place. Vancouver has a really small startup community and everybody is focused on helping you grow,” said Taran.

ElleBox was also accepted into the Toronto-based accelerator program, The Next 36, which is the largest in Canada. Bilmer described the application process as “the most stressful weekend of [her] life.”

Quite a statement, considering the trio pitched their business on the February 1 episode of Dragons' Den.

“When we arrived, the producers said, ‘There’s tons of time — go review your pitch.’ But then the pitch in front of us bombed, so they took us from the dressing room, no hair, no makeup at all and put us on stage,” said Bilmer.

“It’s funny because once you walk on and there’s the lights and the dragons staring at you, you forget about everything else and just end up telling them about your business. We got a lot of valuable feedback,” said Taran.

Although their bid of a 15 per cent stake for $25,000 was accepted, they did not disclose whether they closed the deal after filming. Taran explained that not all successful deals make their way through due diligence.

“Ninety-nine per cent of the deals don’t go through. It’s reality television,” she said.

The trio's goal of empowering women to handle menstrual cycles applies to business as well. The ElleBox founders strive to be female role models for budding entrepreneurs.

“Realizing the lack of women in the business and tech space, that sucks. It would be great to see more [women], for girls to know that it’s possible. Most of the people we’ve met on this journey this year have been men. They’ve been super kind and there’s nothing wrong with that, but there should definitely be more women in business who believe in themselves and know they can do what they set their minds to do,” said Bilmer.