Our Campus: Robert Rouse opens a Game of Thrones course at UBC 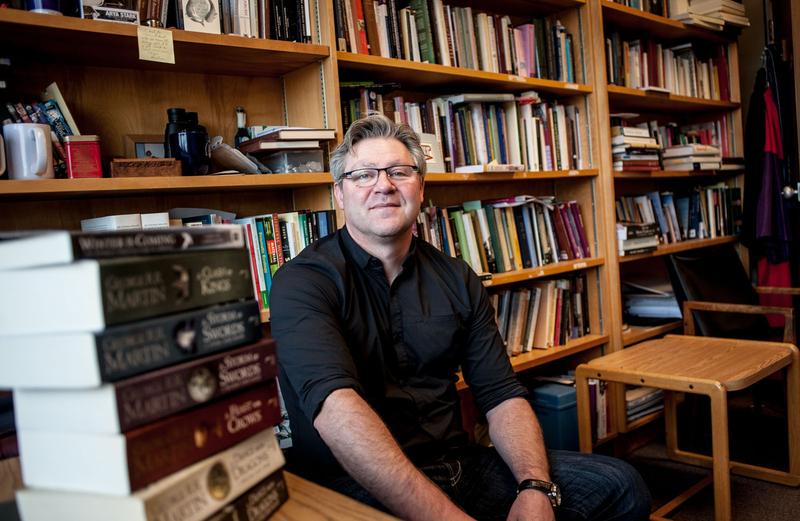 “He's not dead,” Robert Rouse said firmly on the topic of Jon Snow. “There’s no way in hell he’s dead.”

With the chance to share their own theories this term, a group of 16 students are joining Robert Rouse, an associate professor of Medieval English Literature, in a study of George R. R. Martin’s works as the central texts for an investigation of how the medieval is reimagined today.

Although Rouse received his first degree in marine biology at the University of Auckland, he quickly decided to take a different route. “As a 21-year old, I didn’t really want to go live on a small island with penguins,” Rouse recalled, explaining that his interests really lie in how the medieval has been continually imagined to reflect the contemporary moment.

“If you wandered up to someone … and said, “What’s the Middle Ages?’ they would say, ‘Guys with hats killing each other all the time and riding dragons.’ It’s a popular version of the past. Why? Why does the past look like this to people today and to Martin as a writer?” Rouse posed. “That has everything to do with today.”

He sees medieval literature — the fictitious reimagining of the past — as a reflection of its context. Rouse compared Martin’s Game of Thrones to J. R. R. Tolkien and his series The Lord of The Rings. Tolkien also recreated a medieval past, but in very different circumstances to Martin’s.

“Tolkien is writing immediately after WWII, so his politics are good and evil, black and white. It’s very clear cut because he’s just been through ‘us and the Nazis,’” said Rouse. On the other hand, Rouse pointed out that Martin is writing in the 1990s and 2000s, when the United States is fighting Iraq and Afghanistan. It’s hard to tell who’s in the right and who’s in the wrong — it’s messy.

“There’s no good or bad in Martin’s novels,” Rouse explained. “That’s where his politics come through very differently in his texts compared with someone like Tolkien. That’s why I’m really interested in it, because it acts as a mirror in our own time.”

In this fourth-year seminar, Rouse’s students will discuss topics like politics, monsters, disability, history, religion, sexuality, women and race, among others. Rouse is especially keen to see how questions on disability will unfold as a result of characters like the dwarf Tyrion Lannister.

“There’s something wrong with everyone. And if there’s not something disabled about Martin’s characters, he does something to them to disable them,” Rouse noted. “All these limitations are put on people’s bodies because that’s when their characters get tested. The costs of the story are often marked on the body, and I’m thinking about that in terms of the impact on US society of veterans coming back from the Gulf and from Afghanistan.”

Rouse believes that the most important concept A Song of Ice and Fire can teach us is the value and power of the past, as well as the power in the term “medieval.” For example, Rouse pointed to how the press often use the term “medieval” to describe infringement of the rights of women in certain countries. This effectively places such countries in the past, “building a temporal hierarchy,” he explained.

“I want students to come away with a sense of the power of that kind of ideology,” Rouse said.

Next year, Rouse hopes to make his course available to second-year students as well.