Ode to the 99
Written by Alexis Wolfe 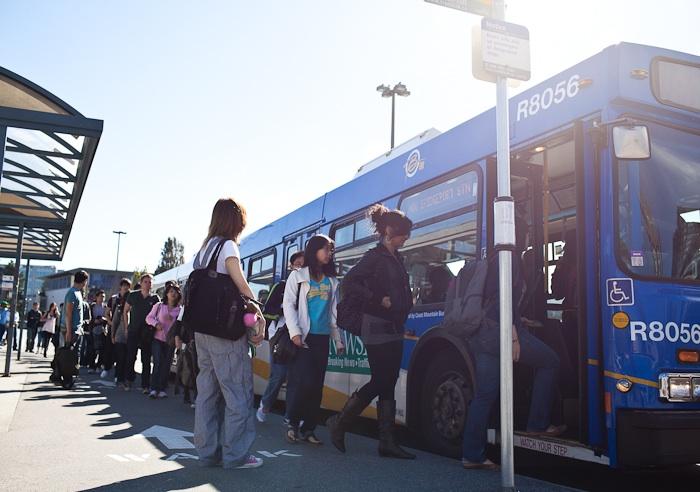 when you enter the back doors, take the blue card out of your wallet and tap the card on the spot the sign indicates. a couple dollars will be deducted from your blue card and despite this transaction feeling abstract, it feels vaguely like you’re fulfilling your responsibility to something larger than yourself — you are keeping the machine going and keeping yourself accountable to it.

the next part could go one of two ways: there is either a seat open for you, waiting to carry you from this side of the city to that side, or there isn’t. when there isn’t — when the memory of someone recalling a 99 experience and characterizing it with the image of sardines packed in a can lights up in your brain — you will stand, containing yourself into the smallest amount of physical space possible, pretending this is totally okay with you.

apart from a somewhat hollow, disaffected or perhaps slightly unsatisfied look on your face, give no indication that your body is pressed up against the bodies of four others whom you have no desire to look at or acknowledge and would likely press charges had you experienced such an invasion of personal space anywhere outside of this exact context.

where should you place your eyes? if you’re standing, it’s important to find a window — look out the window. you have seen the buildings on either side, in the order they occur, countless times, but for the purpose of disassociating from the complete absurdity that is your physical existence at the moment — and to make everyone around you feel at ease with your predicament and their own — just watch the names of stores pass by you again and again. go further — pretend this window opens you up to the most interesting set of images you’ve ever seen in order to avoid being tempted to look around you — to enter your current physical reality.

when the bus stops and herds of more passengers see the vehicle you’re inside, with strangers packed together, all somehow avoiding the acknowledgment of it, look toward them with disempowered concern — it’s mostly in the eyes — anything beyond the eyes is going too far. feel a wave of cognitive dissonance pass over you — you feel fortunate to be on the wagon. they can’t seem to fit, they’re left outside, waiting. you, feeling the limbs of strangers press against your own, breathing air that is heavy and imbued with qualities of smell and density that remind you of the worst parts of your species, you should experience a sense of gratitude — they are out there, moving freely in space with the ability to turn their head without locking eyes with someone two feet from their face. yet they want to trade places but you don’t — you’re going somewhere and they’ve been shut out.

when a woman sees 1.5 square feet available at the door of the bus — space intended to be kept open to not hinder the automatically operating door — look over your shoulder as she calls out to detached crowds within to make room. “can you move down?” she calls, followed by an automatic voice ringing through the intercom: “please move to the rear of the bus — please move to the rear of the bus.” the door rings three times in varying pitches — the doors try to close, the sensor goes off and she waits for us to follow automated instructions so she can inch forward. “please move to the rear of the bus.” everyone is responsible and yet nobody is — we earned this spot, we poured hot coffee down our throats and forgot to put our contacts in, and now we’re here and she’s there. we don’t owe her anything. she gives up, the doors won’t close with her stepping on the sensor, so she steps down, doors close and we collectively lurch forward.

don’t pay attention to them, her or the man who is sitting cross-legged in the back of the bus on the platform behind the seats. he is monologuing, he has a captive audience. what isn’t being said is that all parties are thankful for his disruption. our ears — depositories for his disjunctive modernized, personal odyssey involving prison, daily doses of laughing gas and five hour energy and sermons about the singular energy tying us together. but make no note of any of this. you and those who surround you, with the exception of the girl sitting so close she failed to avoid engaging him, will treat the performance art at the back of the bus like its caught in a screen. imagine there is a clear glass window between you and the performer and make little effort to be seen seeing or hearing the expression of something real at the back of the bus. but remain fully conscious of it — it’ll be the most interesting thing that happens to you this week. but don’t look his way. instead, take the act carried out on the screen behind you and transpose it into text in the screen closest to you. tweet your favourite parts, incarcerate the experience in language and toss it into the cyber-void. you’re allowed to share the absurdity, but be careful not to acknowledge it in real time.

if at some point a seat near you opens up, take it without any regard for others who the seat may be most suitable for. they have heavy laptop bags, arthritis, are trying to study while standing, but you — you have to read wallerstein before your lecture, so take a seat.

have there ever been so many people locked into a space producing so little sound? probably not. but this wont’t last. the 28 year old libertarian in your fourth-year research methods class enters the back doors, sees you, asks why you have not replied to his messages and presumptively takes the seat that just opened next to you. you and him have now entered the realm of entertainment. he says things you cannot not respond to, he talks politics with a noncommittal and chaotic tone so despite it being 8am, you can’t help but engage him. you and him now occupy the soundscape of a rectangular cell holding approx. 50 individuals. your conversation should probably try and stay within the bounds of what is deemed appropriate — considering the political climate and ungodly hour – but it doesn’t. talk about putin, talk about your qualms in academia and the rpg style echo chamber you sometimes feel it may be. everyone knows now — maybe they don’t care, or maybe they care deeply and will doxx us both online in a similar way you did to the free man sitting cross-legged on laughing gas five minutes ago.

whatever your predicament, the moment you enter the doors of the 99, you are on the stage — whether you fall into supporting cast, lead role, a background silent role or a disembodied viewer, you’re caught in the panopticon until the very last stop. you’ll exit and light a cigarette to shake off the feeling only to board the mobile cacophony of absurd detachment in several hours — and then do it again the next day — rinse and repeat twice a day for several years or until you have nowhere to go.

“PC language” exists for a reason