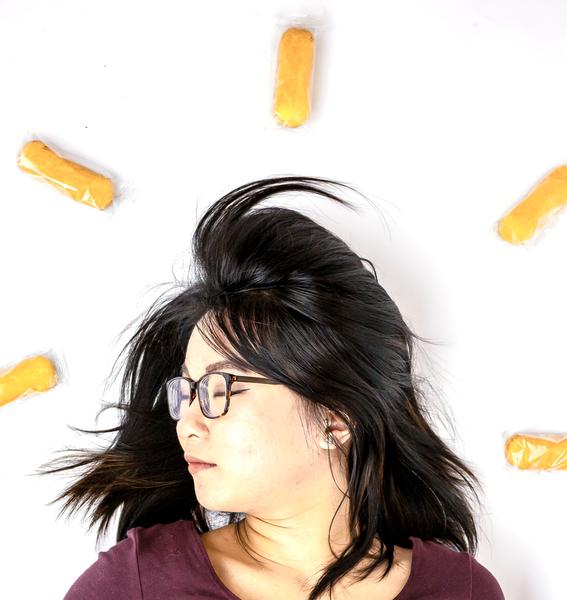 Like many kids of immigrants, I have two names. My name in Chinese is 海伦, which if read aloud, sounds suspiciously like my English name, Helen. I'm not sure which one my mother decided on first. I also don't know whether it was a convenient coincidence or a part of her master plan for me — that I should have the same names in the two languages that I would inevitably have to straddle, like she thought that having both names would be like having a passport to two different worlds.

In either case, I was cursed from the cradle to be kind of one thing, kind of another, but not quite one without the other.

The kind of double life that I lead as a child of an immigrant is strange. I'm 海伦 at home and Helen everywhere else. I switch from speaking English to (stuttering, broken) Cantonese at home. My diet consists strictly of rice and Chinese side dishes at home, and when I go out, I avoid Chinese food like the plague. It's like when a superhero strips and changes costumes, but I can't say that my own double life included capes or supervillains.

It does, however, include some stupid questions, lots of soul searching and a dash of the muddy substance we call racism.

“You act pretty white for a Chinese girl.”

I've gotten variations of this several times throughout my life and every time, I find myself at a loss for a response. One time I replied, “Thanks?” I mentally beat myself up later. Since when is being white a compliment? What does “acting white” even mean?

“You're like a Twinkie — yellow on the outside, white on the inside.”

In hindsight, not only do I resent being compared to a disgusting, cream-filled pastry, I also feel fantastically uncomfortable with being described as being “white on the inside.” As if I'm a white person trapped in the shell of a Chinese one. As if I'm innately white and supposed to be white.

“Are you sure you're not adopted?"

In 1994, my mother uprooted her comfy life as a school teacher in China and relocated to the foreign land of Canada with her husband and parents. She rebuilt her life out of nothing, as thousands of immigrants do when they leave behind their homes in hopes of a better life for their kids. She worked two jobs, seven days a week, washing dishes at two different Chinese restaurants. She tried to learn English, but eventually gave up because she was exhausted by two full-time jobs and because her tongue doesn’t curl around the jagged syllables of English quite right. In a country where the winters are cold, not speaking the language dropped the temperature another 10 degrees.

To Chinese people, I'm what they call a “CBC” — a Canadian-born Chinese. There's a phrase for it in Chinese, usually accompanied with an undertone of patronization, mockery and disapproval.

Once, I met a family friend who started speaking Mandarin to me. My Cantonese is good enough that I can understand bits of Mandarin if it's spoken slowly enough, but on this occasion, she spoke rapidly and in long sentences.

My uncle jumped to my rescue. “She's a CBC,” he said in Mandarin. That was apparently an adequate explanation, as the family friend proceeded to repeat what she said, slowly and enunciating every word as if I were a child.

To the native Chinese, I'm a new breed. A mutant. Not Chinese enough.

Yet in a room full of white people, I stick out like a sore thumb. I do not look white. I am not white.

As a woman of colour, I make 86 cents for every dollar that a white woman makes according to Statistics Canada's 2006 census.

As an East Asian woman, I navigate the dangerous waters of stereotypes that I'm supposed to be passive, exotic and delicate. I see the media represent Asian females like me as the nerdy best friend, the tiger mom and the submissive girlfriend of the white hero.

When a room full of white people look at me, they see an ideal of what I should be, based on a definition they have readily constructed for me.

A few years ago, my mother was doored by a careless teenager as she biked home from work and the paramedics called me.

She lay in the ambulance by the time I arrived, head bleeding slightly and barely conscious. I held her hand and asked her how she felt.

“I'm fine,” she responded in a small voice. “Stupid drivers.”

On the way to the hospital, the paramedic asked me some general questions about her health and told me that the hospital may want to keep her overnight. When I relayed this to my mother, she looked up with as much energy as she could muster. “But I have to work tomorrow! I'm fine, let's go home!”

I chose not to translate this to the paramedic.

At the hospital, the doctors whisked her through a series of tests and scans. The majority of the eight hours we spent there was in the waiting room, where she switched between holding a supplied ice pack to her head and cursing her bad luck. By the end of the night, the doctors concluded that she was fine and should just take pain killers.

When I told her what the doctors said, she rolled her eyes and said, “See? I told you. What a waste of time.”

But I couldn't get the image of my mother bleeding in the ambulance out of my head. She was not a weak woman. Seeing her in a state that was not her usual, energetic one terrified me. Parents are supposed to be invincible.

My “world history” course in high school focused mainly on European history, with the exception of ancient Egypt. Asian history was never once mentioned.

When I realized that whenever I read books, the characters were always automatically white in my mind, unless otherwise stated. For some reason, my mind decided that white was the default.

Before high school, two of my friends decided they would be trading their Chinese-phonetic English names for “real” English names. YuChen became Elise. MeiFan became Yvonne. They never told me why.

Over the years, my Chinese name has been used less and less. My grandparents are the only ones who use it consistently now. My mother has picked up a little more English after working in a Canadian restaurant for 10 years and she now only calls me 海伦 once in a while.

I'm forgetting bits of Cantonese, which had been choppy to begin with. It will probably keep worsening as I spend the next four years away from my family.

I'm missing Chinese traditional celebrations while I'm 6,000 kilometres away. Worshiping the ancestors, burning incense and fake money as my grandmother mutters blessings under her breath. Eating mooncake and admiring the full moon. Making sticky rice for the beginning and end of summer.

The few ties I've had to my heritage are dissolving little by little, and I'm not sure I'll be able to bring them back.

I am not a Twinkie.

I am not white. I have grown up in a Western society, immersed in Western culture, but that does not make me a white person. I will never be white. I have no desire to be white.

I may not be “Chinese enough.” I do not speak, read or write the language. I know very little about Chinese history.

But my family is Chinese. My ancestors are Chinese. I grew up being taught Chinese values. Therefore, I am Chinese. And being born in Canada, I'm Canadian.

The first and only time I saw my mother cry was alarming. After years of weathering, crashing waves and howling storms, she had never complained.

But when she cried, it was because I was growing up.

海伦 means “ship”, built strong and tenacious. I like to think that my mother chose this name in hopes that I too can weather the storms.

Post-concussion, I found balance through bullet journaling and relaxation apps