UBC is unique from most universities because it owns and operates its own water system. But how does water get here? What do we do with it? And how do we reconcile our collective need for water with a climate crisis that could see it becoming our most precious commodity?
Marissa Birnie 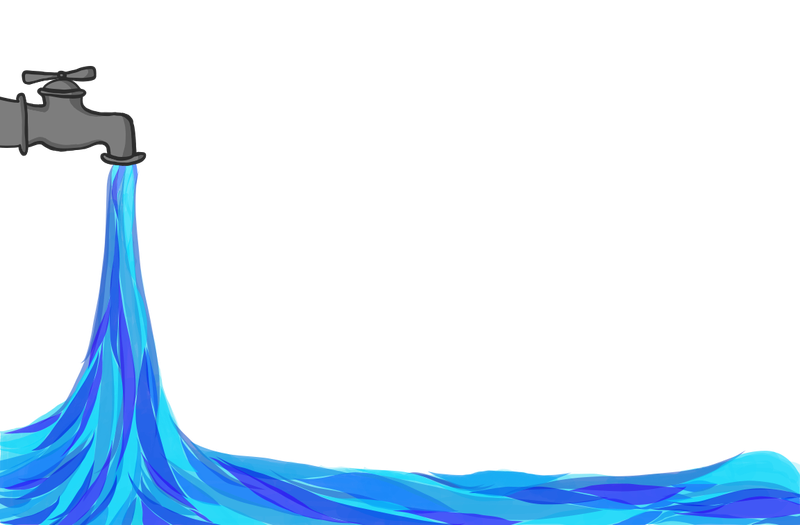 The sound of rushing water is everywhere. It surges down the spillway — mossy green, then blue — spraying sky-high and settling into a bubbling pool. A swirling mist hangs in the air.

This is the Cleveland Dam in North Vancouver, and it’s part of water’s long journey from the snowmelt of Vancouver’s mountains to your tap on campus.

UBC is unique among most other universities because it owns and operates its own water system. But how does water get here? What do we do with it? And how do we reconcile our collective need for water with a climate crisis that could see it becoming our most precious commodity?

It turns out a lot of people at UBC are thinking about these questions for our campus and beyond.

Last year, UBC used roughly 3.6 billion litres of water — enough to fill 1,500 Olympic swimming pools — at a cost of $2.3 million. But where did it come from?

The water is collected in reservoirs — lakes used to store drinking water that are closed off to the public.

UBC’s water is sourced from the Capilano reservoir and treated at the Seymour-Capilano filtration plant before it makes its way to campus. UBC buys its water from Metro Vancouver and stores it at its own reservoir in Pacific Spirit Park.

UBC operates its own utilities, managed by UBC Energy and Water Services.

“We effectively operate as a city,” said Managing Director of Energy and Water Services David Woodson.

Water enters UBC through water mains below campus and is divided into high and low pressure zones, he said. Water is constantly flowing through more than 80 km of pipes laid throughout campus.

The water is tested every Tuesday for abnormalities. The biggest threat to drinking water is typically backflow, which occurs when water flows in the opposite direction, posing a risk of contamination.

Infrastructure can sometimes fail too. In 2017, a heat exchanger leaked materials into the hot water supply and as a result residents were asked not to drink the hot-water in several buildings.

Wastewater — the water you flush down the toilet, for example — is treated at a facility owned by Metro Vancouver and then discharged into the Fraser River or the ocean. UBC manages its stormwater by discharging it through pipes that end in storm outfalls, which return water back to the environment.

UBC’s race to save water

In the Nest, a barista brews your morning coffee. A swimmer dives gracefully into the pool at the Aquatic Centre. Sprinklers flick on at the UBC Farm.

The constant flow of water is a necessity on a campus where almost 80,000 people live and work each day.

According to a 2011 external audit, UBC’s main uses of water come from process cooling, research and washrooms.

Campus and Community Planning’s Water Action Plan, a document designed to guide UBC’s approach to water conservation, says the university has reduced its water usage by over 50 per cent since 1997, despite increasing enrolment. This is largely a result of two projects: ECOtrek and steam to hot-water conversion.

ECOtrek was a near decade-long program designed to retrofit campus buildings to be more water and energy efficient. It was completed in 2008.

In November 2007, at the United Nations Colloquium of University Presidents, former US President Bill Clinton name-dropped UBC as one of three universities leading the way in sustainability with its ECOtrek project.

“All these [university] presidents are coming up to [then-UBC President] Stephen Toope afterwards and congratulating him and saying how proud he must be of being [part of] a world-leading university that’s doing these things. He gets on the phone at his hotel that night and wants to know everything about the initiative,” said Woodson.

“The Bill Clinton speech we refer to as kind of our Stephen Toope moment,” he continued. He said his department felt a similar moment on the horizon when UBC formally declared a climate emergency.

“We were just talking internally, like, ‘I think we’re going to have … a pivotal turning point in UBC’s history.’ And when President Ono came out and declared a climate emergency, it really feels like that’s exactly what just happened,” he said.

The other project that contributed to UBC’s water conservation efforts was the steam to hot water conversion, which saw the end of steam energy on campus. UBC saves 272 million litres of water per year as a result, according to Campus and Community Planning.

These aren’t the only water-saving initiatives. There are dry toilets in the C.K. Choi building, a rainwater harvesting system on the roof of the Aquatic Centre and low-flow-shower-heads in student residences.

But despite its efforts, UBC is facing a problem. The campus is growing and our water consumption is growing with it. The goal is a 16 per cent decrease in water use from 2017 levels by 2025. There’s also a push to cut greenhouse gas emissions by 67 per cent below 2007 levels by 2020.

Woodson says the steam to hot water conversion and the expansion of UBC’s bioenergy facility puts the university on track to meet its goals — he estimates a 63 per cent reduction in emissions by the end of the year. The issue is what to do next.

Water could become more expensive and scarcer in Canada as the water supply becomes more volatile.

Dr. John Wagner, an associate professor of anthropology at UBC Okanagan, witnessed the effects of the climate crisis in 2017 as the city of Kelowna, which was built on a floodplain, experienced severe flooding.

Part of Wagner’s research involves studying the Columbia River Basin in southeast BC that extends into the US. As the glaciers that feed the river melt as a result of climate crisis, he expects a severe impact on agriculture in the region.

Dr. Leila Harris is a professor at the Institute for Resources Environment and Sustainability and the Social Justice Institute. She is also the co-director of UBC’s Program on Water Governance, which conducts research on water sustainability issues.

Her research on water focuses on the intersection of the social and political.

Both Wagner and Harris say climate crisis impacts their teaching.

“I’m seeing a lot of concern [about the climate crisis] in the classes I teach,” said Wagner.

This semester, he’s teaching a course on the anthropology of water.

“I really want to bring a sense of love of water, celebrating water, not just a sense of, ‘Oh dear, we have all these crises to handle around water,’” he said.

Harris says she’s noticed a growing interest in climate issues from her students.

“I just think that the imperative is that much more clear to everybody,” she said.

“I feel like it’s becoming something that many other people who might not have been interested in want to be conversant and literate in. And so I’m encouraged by that, you know, just to see more people going to those sorts classes and wanting to do those sort of projects and wanting it to be a core part of their undergrad education.”

Carving space in the cosmos: For marginalized students on campus, navigating the Greek system comes with ups and downs