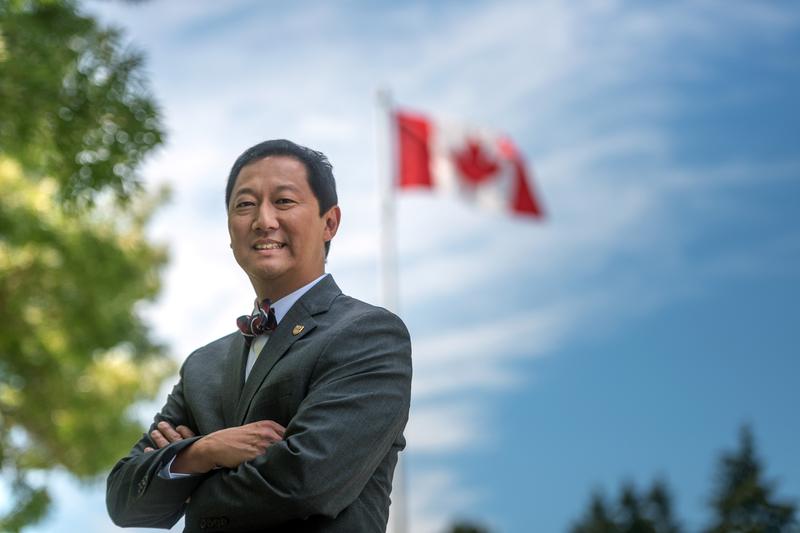 One of the reasons he was at at the conference was to destigmatize mental health. UBC

UBC President Santa Ono was one of around 15 speakers at this year’s TEDx West Vancouver education conference this weekend.

While the TEDxWestVancouverED conference was geared towards teachers and those who work in education, some of the speakers at this years conference brought diverse backgrounds to the table, such as architecture, law enforcement and even 2015’s National Geographic “Adventurer of the Year,” Gavin McClurg.

With this year’s theme of “Imagine” the speakers were organized into three parts: imaging, rethink and change. Building upon the discussion during the rethink portion of the conference, several speakers shared the stories of their relationships with mental health, including Ono — he touched on his struggle, as well as that of Brogan Dulle, a student at the University of Cincinnati who committed suicide while Ono was president there.

Ono begun his talk with a resonating image: “A crisis, an epidemic, if you will — that’s going on in our schools. [Kindergarten to grade 12], as well in our universities and also in the arena of young adults’ lives.”

Speaking about Dulle and himself, Ono compared and contrasted their experiences in school, saying that, “even though we look different, [Dulle] was an athlete, I was not, he was probably more popular than I was, I was sort of nerdy and he was really more well-rounded, there’s a similarity between the two of us.”

Dulle went missing at the age of 21 — on May 18, 2014 — which commenced eight days of searching by thousands of people in the community. After the discovery of Dulle’s body, said Ono, “the entire community, the entire university, [and] obviously his family [were] totally grief stricken.”

“One of the hardest things you do as the president of a university or a principal of a high school or junior high school is to have to preside over a memorial service for a student who has taken his own life.”

Ono then described his own struggles with mental health and self-acceptance, attempting to commit suicide at the age of 14 and again in his late twenties. As the middle child of three boys, he felt “flanked by two child prodigies” of music and math, a “pretty ordinary guy” of an outstanding family that quickly ignited feelings of worthlessness and inadquency in him.

“Thank goodness I woke up.”

He then went on to describe how he struggled continually with his mental health for much of his academic career, again attempting to commit suicide quite a few years later.

“The second time was more serious. Thank goodness, in my late twenties when I was working as an assistant professor at John Hopkins University, I had a chance to receive the treatment I needed.”

In the aftermath of Dulle’s death, 8 days of greatness was created by Dulle’s family — a yearly event, held in May and centred around performing acts of greatness around a specific theme each day. According to the website, “the themes were chosen to reflect Brogan’s zest for life and our desire to honor his memory.”

“If we all embrace those over that eight day period, every single year, they believe that we can build the kind of web of support needed to intervene with youngsters who are struggling with their mental health,” said Ono. “I hope it spreads all over this globe.”

Ono situated these mental health issues of himself and other young people by commenting on how we can learn from them and use them in our learning and teaching environments. These issues are so important to be talking about right now, he noted, because UBC just welcomed 9,000 new first-year students to the university.

“In that group of 9,000 people, one in five are going to struggle with mental health during their time at UBC — and UBC is nothing special. It’s happening in the schools and universities around North America. Everywhere we go, this is a crisis, and that’s why this conversation is important.”

Ono explained that one of the reasons he was at at the TEDx education conference was to destigmatize mental health, and noted that the more we can destigimatize, “the more we can as a community take the steps that are necessary to create this web of support for our youngsters, for our kids and for our grandkids.”

“There’s a lot of things that are happening, and I think they are good steps, but I can imagine the day when every young person and young adult who thinks they are alone will realize they’re not the only one,” said Ono.

One such program is #b4stage4, which was founded through the Canadian Mental Health Association and segments the mental health of young adults into four different severities and subsequent approaches.

“We need to get this kind of early intervention and training for all teachers, for all parents, for all peers,” said Ono. “We need this to get out so everybody understands that the earlier you intervene, the more likely you are to save an at risk youth.”

Ono also provided another example of this in the National Health Service in the UK, which is pioneering a program where there is free counselling 24/7 and primary care help for at-risk young adults and kids. Ono sees this as a “comprehensive web of support that will save billions of live around the world,” and an example of a program that he would like to see normalized in other countries.

“Social media is also that is something very powerful with youth,” Ono added, referencing the Thrive at UBC program, which aims to build positive mental health connections at the university through web-based peer support service. He also referred to Instagram and Facebook, where through the use of certain hashtags, the platforms reach out to youth and link them to resources available for them.

“Everybody has to talk about what’s happening, we have to eliminate, dispense with the stigma about talking about mental health,” said Ono.

Ono ended his talk with the story of Laura Taylor, a UBC medical student and hockey player at UBC who took her own life last year, as an example of how these resources need to reach everyone, even those who appear not to need any help.

“She appeared happy, she appeared popular, she was strong, she was not a little engine but she didn’t believe that she could,” he said.

“I’m lucky to be standing in front of you today and indeed to be so privileged to be the president of one of the world’s great universities, the University of British Columbia.” said Ono.

At the end of the talk, he summarized his dream for the handling of mental health issues in our society, “if we collectively say we think we can, then we can create a comprehensive network to serve and protect at risk youth to make sure that they stay alive.”