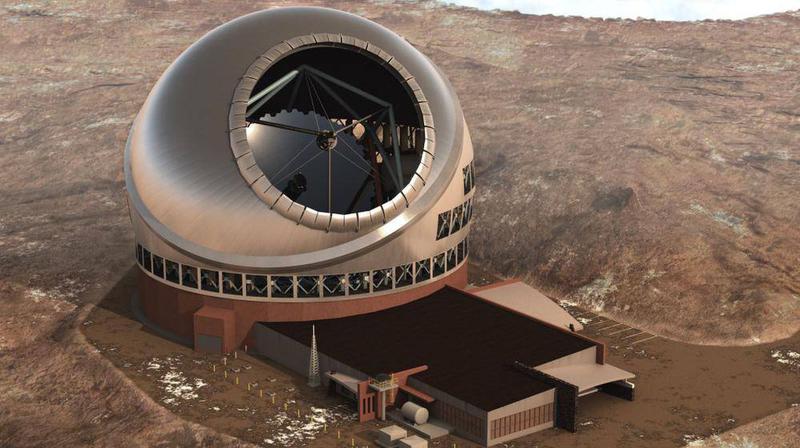 The telescope is slated to be built on Mauna Kea, a mountain sacred to Kanaka Maoli, or Native Hawaiians. Courtesy The Globe and Mail

Over 70 UBC faculty members have joined the call on universities to withdraw their support for a telescope project slated to be built on a site sacred to Indigenous peoples in Hawai’i.

On July 25, UBC faculty members sent an open letter to President Santa Ono, calling for the university to divest its support from the Thirty-Metre Telescope (TMT) project, which is a partnership between Canada, the University of California, Caltech, Japan, China and India.

The university is a member of the Association of Canadian Universities for Research in Astronomy (ACURA), an organization of 20 top Canadian universities committed to astronomical research. ACURA is heavily involved in the project in which the federal government committed $243.5 million in 2015.

According to its website, TMT will be a “new class of extremely large telescopes that will allow us to see deeper into space and observe cosmic objects with unprecedented sensitivity.”

“It’s in a spectacularly good site to do astronomy,” said Dr. Harvey Richer, an astronomy professor at UBC. “You can do things up there that you can't do elsewhere.”

According to Richter, the TMT project would allow astronomers to do research that is still hypothetical. For example, astronomers would be able to look for certain molecules in the atmospheres of distant planets. Molecules, like ozone, are produced through biological processes and their presence in a planet’s atmosphere could be an indicator of life somewhere in the universe other than Earth.

“One of the most important ideas that people had in the last hundreds of years is, you know, ‘Are we alone in the universe?’” said Richer. “The answer is, ‘We don’t know.’ But TMT might allow us to answer that question.”

The telescope is slated to be built on Mauna Kea, a mountain sacred to Kanaka Maoli or Native Hawaiians. The construction of the telescope on the mountain has been protested since the site was chosen. But on July 17, police arrested 33 elders for peacefully protesting the construction, sparking outrage and support for the Mauna Kea protectors, known as kia’i.

Indigenous rights at home and abroad

Galla is Kanaka Maoli from Kaʻū on the island of Hawai’i and Callison is Tahltan, an Indigenous nation located in northern BC. With the letter, they hope that UBC would show leadership in opposing the construction of TMT on Mauna Kea, especially since the university has been pushing forward its reconciliation effort in Canada.

“If our institution is saying that we will stand up for Indigenous rights, then we have to go all the way,” said Galla. “We can’t just pick and choose what we’re going to support.”

For Galla, who hasn’t been able to visit Mauna Kea, this letter to the President is also her way of contributing to her traditional homeland.

“Being from Hawai’i and being raised in Hawaiian culture ... it really grounds me and what I am responsible to and for,” she said. “So, standing up for sacred lands, like Mauna Kea, and opposing projects like TMT, it’s just something that I will stand for.”

For Callison, her experience as an Indigenous person from a community without a treaty has made the issues of consent and proper consultation very important to her. Both faculty members also pointed out that many people in Vancouver go to Hawaii for vacations and they said they want people to be aware of injustices that are happening both at home and abroad.

“There [are] so many injustices that are happening in Hawai’i but ... also happening right in our backyard, right in Vancouver, right in British Columbia, right across Canada,” said Galla.

Call for a moratorium

After calls to withdraw from both the Vancouver and Okanagan campuses, Ono released a statement on July 26 calling for a 60-day moratorium on the project to “allow for the fulsome consideration of other potential sites for TMT.”

“UBC is deeply committed to engagement and reconciliation with Indigenous peoples… UBC strives to ensure that research projects involving or affecting Indigenous peoples are built on mutually beneficial, reciprocal and accountable relationships,” reads the statement.

Callison and Galla agree that although the moratorium is a step in the right direction, the university needs to commit to the relocation of the TMT project to a site where consent is granted. The Canary Islands and Chile have been proposed by protestors and astronomers alike as potential alternates.

“[The moratorium] doesn’t necessarily mean ... the removal of TMT from Mauna Kea,” said Galla. “It’s just more time to kind of think about it or to consult, but not really removing or backing away or withdrawing from entire project completely.”

Richer believed that the Canadian astronomy community would be disappointed by a relocation of the telescope to the Canary Islands. The lower altitude and dust storms that come in from the Sahara Desert make the images low quality compared to images from Mauna Kea.

Though UBC is a member of ACURA, it does not directly fund TMT — that funding comes from the National Research Council of Canada. If the university were to withdraw from the group, individual astronomers would not be affected, Richer said. He believes the university would not tell faculty members to stop their own involvement in the telescope, whether that is by designing instrumentation or planning research.

Galla stressed that the opposition to the TMT project is not about being “anti-science” or “anti-progress,” as many supporters of the project have characterized the protests. Instead, she said it is about the desecration of sacred land.

“The same type of work can be done elsewhere,” she said. “It doesn’t have to take place on sacred land and at the expense of Indigenous peoples.”