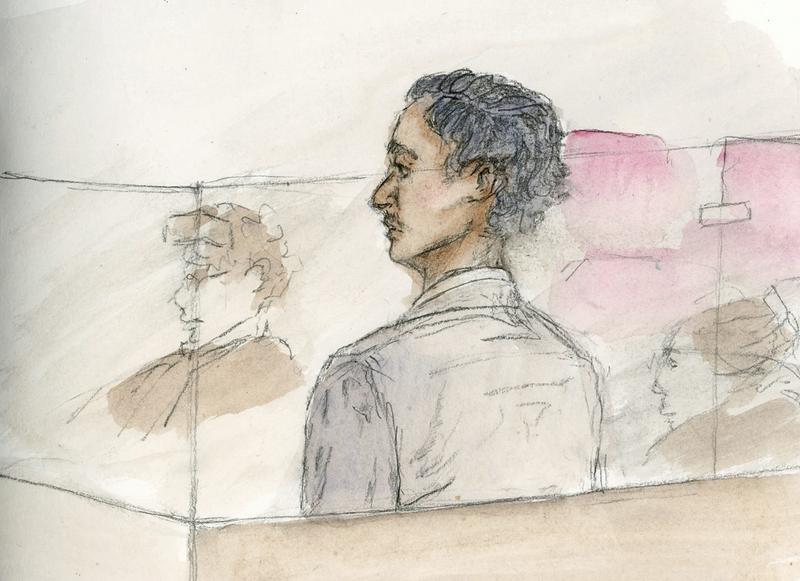 An artist’s rendering of Almestadi during his trial at the BC Supreme Court. Aiken Lao

The former UBC student found not criminally responsible for stabbing and choking another student is being ordered to return to Saudi Arabia after his release from custody.

Thamer Almestadi, who faced a ten-day trial this past fall for an attack which took place in October 2016, is moving back home with his family. This decision was made by a BC Review Board panel in early December.

During his trial, a forensic psychiatrist as well as Almestadi himself testified to his poor mental health and confusion, which began predominantly during the September of his first year at UBC. After weeks of delusions, stress and poor sleep among other factors, Almestadi listened to a religious recording and misinterpreted it as a command from God. According to Dr. Jeannette Smith, he experienced a “brief psychotic episode” that prompted the attack on victim Mary Hare in Totem Park residence.

Almestadi was found not criminally responsible due to mental disorder in late October 2017 — the judge ruled he was not capable of appreciating the morality of his actions at the time of the attack. Upon this verdict, he was transferred to the Forensic Psychiatric Hospital in Coquitlam for treatment, pending disposition by the specialized review board. With his discharge from the jurisdiction of the hospital, he will be deported under escort to Saudi Arabia.

The board did not consider Almestadi’s immigration status in their decision but rather his current mental health and prospects for treatment.

They found Almestadi to be “high-functioning” and identified “positive signs that he may not relapse” — he has had no psychoses for over a year without treatment and has not been aggressive, they said — but still noted he posed a moderate risk.

“There is a significant likelihood that, under circumstances he experiences as highly stressful, Mr. Almestadi may experience a further episode of psychosis,” the majority decisions read, noting an episode “could involve violence.”

But the decision concluded that many environmental stressors would be lessened should Almestadi return to Saudi Arabia, and that there is no incentive or threat significant enough to keep him under his current care.

Almestadi’s parents had been living in BC for the past year to support their son but wanted him to return home with them. He has no source of support in BC.

The family has found a psychiatrist located just over an hour from their family home who has agreed to provide treatment and monitoring for Almestadi on a weekly basis.