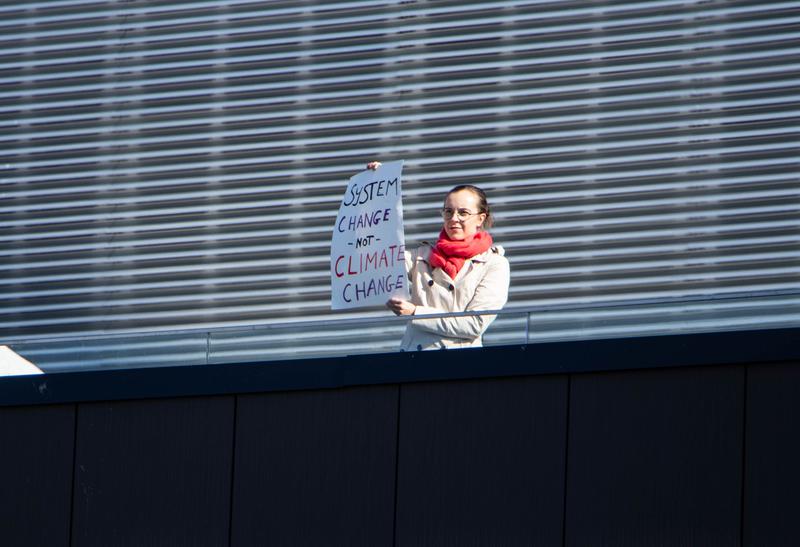 A demonstrator at the UBC climate strike in September 2019. File Christopher Ma

The AMS is looking to hire a consultant to develop its plan to have net-zero carbon emissions by 2025.

According to environmental consultant Offsetters’s proposal, if hired, the company would first collect AMS data from 2019 to produce a greenhouse gas (GHG) inventory report outlining the sources of emissions in AMS operations. Then, it would prepare a five-year GHG management plan to guide AMS’s actions.

Part of the AMS’s Sustainability Action Plan unveiled this year, the emissions plan would include both short and long-term cost-effective strategies for the AMS to reduce emissions, as well as “best practices” to meet its goal. The partnership would cost the AMS around $17,700 plus taxes.

Offsetters declined to comment, saying that discussions with the AMS were still preliminary.

For the AMS to reach net-zero emissions, the total annual energy used by the Nest needs to equal the renewable energy created on site.

Sylvester Mensah Jr, AMS VP administration, said UBC is offsetting the AMS’s emissions. The Nest is also a LEED Platinum-certified building which means it’s among the most sustainable buildings in North America. As a result, the AMS wants to explore other areas such as its supply chain where it could reduce its emissions.

“Given that our energy consumption to an extent is net zero, … [there] is the need to look at other things that could constitute our carbon footprint in the community,” said Mensah. This includes the custodial waste produced in the Nest, the AMS vendors and behavioural changes.

Mensah added that the AMS is looking for a company that can produce a framework in line with its 2025 timeline while suggesting realistic actions.

“[We’re] looking for a company that is able to figure out what indeed our building would need and the various recommendations that will come with that,” he said.

The AMS was first interested in working with Stantec, a consulting firm which has worked with UBC several times in the past, including on the Faculty of Pharmaceutical Sciences building. Although the AMS approached both Stantec and Offsetters because of their industry reputation, initially it leaned toward Stantec.

However, the AMS said it didn’t receive correspondence from Stantec in time, so Offsetters was the only firm to give the AMS a proposal. Moving forward, Mensah said the AMS may pursue a request for proposals process.

Although the process is in exploratory stages, Mensah thinks the AMS will be able to meet its 2025 goal. He mentioned that they’re doing more than just relying on an external partnership — for example, pursuing sustainability projects and researching the supply chain side.

“I think the biggest challenge will be the data compilation because there’s a lot of factors that come into creating a framework of this nature,” Mensah said. He added that the cost might also be an issue when it comes to realizing the project, but added the AMS is working to reduce its deficit this year.

By the end of his term this coming spring, Mensah wants to have a framework completed outlining what the AMS’s current emissions are and what direction it should take to offset them.

“It’s in our best interest [to] respect the recommendations being made and following accordingly in order to reach this goal, given that as an organization, this is something we do want to make [happen].”