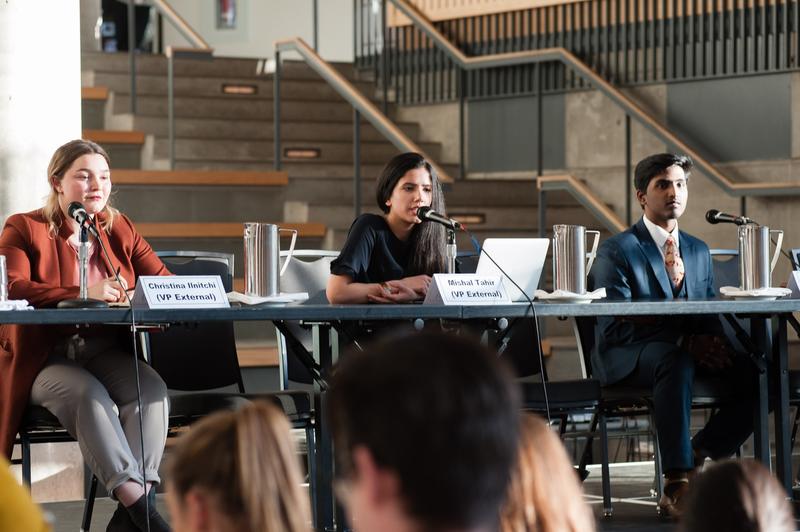 All three candidates for AMS VP External — Mishal Tahir, S.G. Krishna and Cristina Ilnitchi — faced off on questions related to tuition advocacy, transit and sexual assault policy implementation at the Great Debate. While each candidate brought unique platform points, it became clear that each had varying levels of concrete policy proposals.

First asked about the recently-released provincial and federal budgets, Ilnitchi highlighted that while the province includes funding for student housing and mental health services, it does not include the $1,000 completion grants for students promised by the NDP.

“If reallocated as an in-school grant, [completion grants] can help students when they need money the most,” said Ilnitchi.

Conversely, Tahir focused on transit funding allocation from the increase seen in the new provincial budget, stating that she would lobby for increased service to high-frequency bus routes to make it more accessible for students to live and work off-campus because “Vancouver housing is a big issue, a big mess.”

Krishna did not address the budget directly and instead said he would advocate for student housing prices to be based on income at UBC.

Continuing on the topic of transit, both Ilnitchi and Tahir named lobbying for a SkyTrain extension from Arbutus to UBC as a priority, but took different approaches. Tahir stressed that she would like to secure funding for the line to extend all the way to UBC immediately instead of waiting for the next phase of development, while Ilnitchi would like to “ensure that capacity is built up to transfer students from Arbutus to UBC” given current plans to stop at Arbutus.

Krishna, who did not address the SkyTrain issue, stated that he would lobby to increase bus service to and from UBC in the evenings and to air-condition bus-stops “so people waiting in line can feel free.” He also diverged significantly from his opponents by stating that the AMS should lower the cost of the U-Pass and also allow for more opt-outs — Tahir and Ilnitchi both believe that a long-term agreement can and should be reached with TransLink in the next year.

When pressed on how he would ensure the U-Pass program could continue if made optional, Krishna provided no strategy.

Regarding tuition affordability, Ilnitchi wants to focus on procuring provincial funding for all domestic students enrolled by UBC in order to prevent constant two per cent tuition hikes, while Tahir wants to look externally to the university for scholarship support and jobs for students, particularly international ones.

Stating that the Board of Governors should “get rid” of the two per cent increases and make domestic and international tuition the same, Krishna stressed this would be a “winning strategy for both students and the university” but provided no concrete examples of how he would achieve this.

During the audience question period, candidates also addressed timely issues like the upcoming Vancouver municipal elections. While Tahir doesn’t see a new mayor as “really that imperative,” she and Ilnitchi agree that municipal advocacy is essential to securing student interests, with the latter stressing the importance of ensuring all candidates are aware of what students need and that students can exercise their rights to vote. Krishna acknowledged that there “could” be municipal advocacy but did not elaborate upon this.

When The Ubyssey asked a closing question about how the VP External could support the implementation of Policy 131 on sexual misconduct at UBC, Krishna spoke of “funding gaps” before admitting that he was “not quite sure of the policy.” Ilnitchi noted that the policy “needs quite a bit of work,” with both her and Tahir reiterating survivor-centric support as “integral.”

“It is [the] government’s work to hold UBC accountable and to ensure that the policy is implemented,” said Ilnitchi.

“If funding is the problem, [the VP External] needs to ensure that it is being allocated to UBC and other schools who need it more as well.”