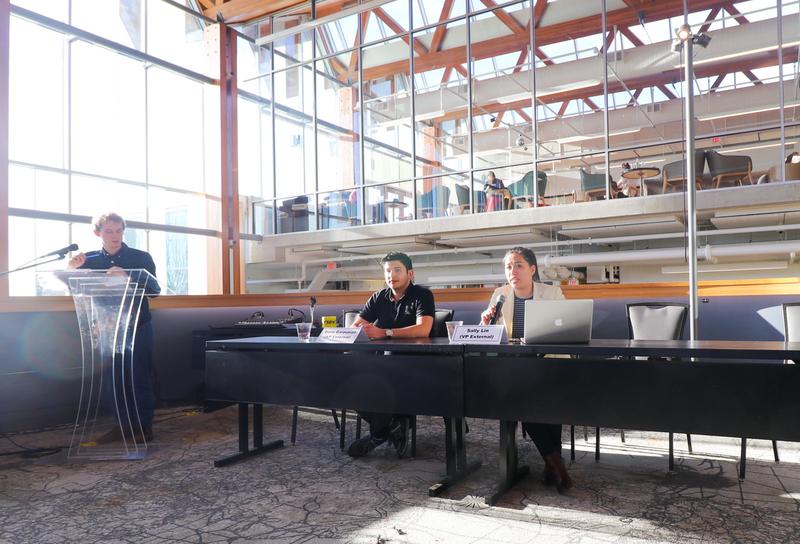 The candidates spent most of the debate reiterating points from their platforms, which bare great similarities in that they both specifically address issues such as student housing, transit services and the intention to invest in open educational resources.

However, when asked what they thought was the AMS’s most achievable external priority, the candidates placed emphasis on different issues within the university community.

Lin spoke on investing in open educational resources (OERs), which she said are “a comparatively low cost program to the government” which makes it realistic for them to advance. She also brought forward she noted to be a unique goal of global price parity for textbooks.

She noted that University bookstores can't buy textbooks from outside Canada, and that their price match program is only effective within Canada, something she wants to change.

“[It] comes at no cost for the federal government to change, as it is an amendment of legislation,” said Lin.

Lin also emphasized that the UBC bookstore sells less than 50 per cent of their textbooks despite them being imported at Canadian prices, and she placed emphasis on this being an issue of importance that she would like to address.

Garousian, on the other hand, wants to prioritize changes to transit service, and bringing back the 99 Special, which terminated in 2005. He also echoed a point in his platform, which is that with the construction of the Broadway “Subway,” “congestion on the Broadway line will reach an all time high.”

They also both spoke to different aspects of the provincial budget that they would like to see changed. Lin said that the AMS needs to continue advocacy for student loans, focusing on increasing the absolute amount after the recent success decreasing the interest rate. Garousian pointed out the need for grants for individuals seeking psychological assessment, which he said would cost $7 million.

When it came to debating the idea of working with larger student organizations and student unions both were supportive, but with Garousian expressing concern that the price tag on joining many of them is a concern.

During the open question period, Garousian was questioned about his current heavy political involvement. He responded, saying that, if elected, he will resign from all partisan positions.

In their closing statements both candidates asked that students read their platforms.

Garousian further highlighted that he would be an open and transparent VP External, making sure students know what projects he is working on at all times and where his budget is going.

Lin ended by noting her interest in supporting the elected president and executive with the new sexual assault policy and its surrounding issues.