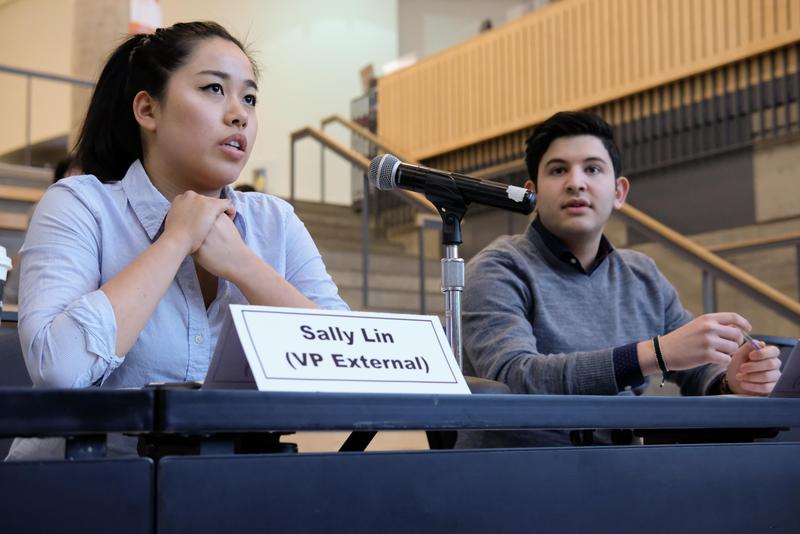 The first question posed to both candidates asked how each of them planned on addressing transit strains for students. Lin emphasized her desire to push for the continuity and immediate transition of phase one and two of the construction of the Broadway Corridor.

In addressing this first question, Garousian referred back to his plan of reinstating the 99 Special, which Lin then disagreed with. She rebutted, “there is literally no room around Arbutus for a massive bus loop that is going to uphold demand and efficiency of getting UBC students to [campus].”

Garousian then offered his rebuttal in stating that he does not think adding a major bus loop is necessary for this to be achieved. “This is a short-term plan while we push for the extension of the Broadway line. The short-term solution is not a long-term fix,” he said.

The candidates were then asked what their thoughts were on the Vancouver mayor’s 10-year transit plan and what they would lobby to change should they fill the position of VP External.

“We need to fight for the extension of the Broadway line and for the construction to begin in phase one,” said Garousian. Both candidates have expressed this intention in their platforms and were in agreement regarding this during the debate.

“I would also say that we need to focus our efforts in pushing for rapid rail transit, which is sort of an underground subway solution. This was not originally on the tables … so I think student unions should be uniting to ensure that rapid rail transit is extended all the way to UBC,” said Lin.

Subsequent to the questions posed that addressed transit accessibility for students, the moderator asked how each candidate’s lobbying strategies will differ against a Liberal or NDP government given the upcoming provincial election.

Garousian began by referring to his experience working for the NDP, which was clarified as unpaid work after a question from the moderator. “I would have connections within the party and I would work towards them because they do have priorities regarding students,” he said.

However, he stated that should he gain this position, he would drop all partisan affiliations.

Lin rebutted, saying, “I hugely disagree that partisanship is an advantage. We’re here representing students and we’re supposed to represent all students regardless of their political leanings.” Lin then emphasized that the VP External position requires political decision-making that pertains to “the position and not the individual.”

In a candidate-specific question, Lin referred back to her experience lobbying with the Vancouver School Board as an education and student services representative.