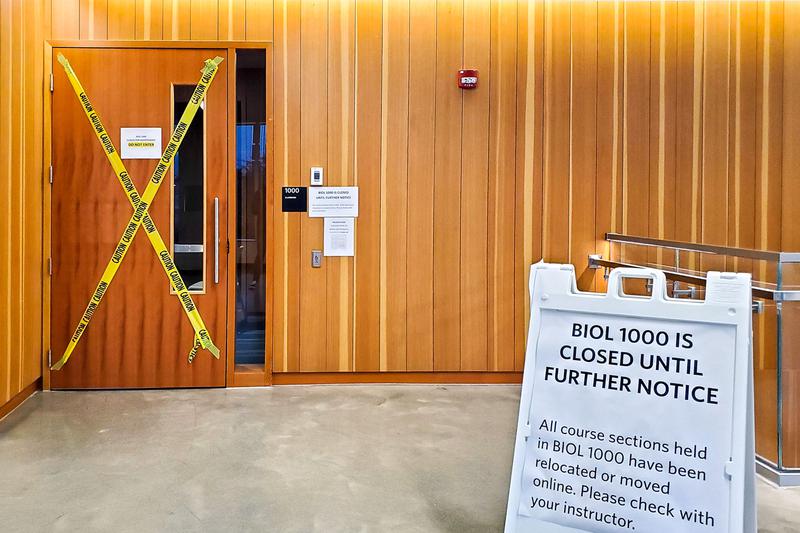 An announcement released on November 18 regarding the temporary closure remains up on UBC’s Learning Spaces website. Jerry Wong

The collapse of some ceiling tiles in the Biological Sciences Building last week prompted safety concerns and created logistical challenges for both students and professors.

Emails obtained by The Ubyssey indicate that multiple classes were supposed to be held in room BIOL 1000 on Friday, but were moved to various locations around campus after the space was closed for repairs.

“...I just didn't notice them because someone had dragged them over into the corner,” he said.

Dr. Evelyn Sun, a professor of microbiology and immunology at UBC, usually holds her microbiology lectures in BIOL 1000. She has now moved her lectures permanently to a different building, but said the process was not without its challenges.

Though she received emails from the head of her department when the room closed, she said the affected professors were little information about what they should do. Sun also indicated that there were difficulties in communicating to her students, as she had to send several separate emails as plans were changed between the option of using Zoom or relocating to an available space.

Harley also said that it has been a process to adapt to the situation, but that he is satisfied with the response by UBC.

“... I think that Building and Operations did a good job of shutting that room down immediately once they were aware of the issue. But it is now a challenge to have to shift to other classrooms, teaching virtually some days of the week. And it's not as fun as all being in the same place,” he said.

According to a statement from UBC’s Managing Director of Infrastructure Development, Jennifer Sanguinetti, the room is being assessed for causes of the collapse, but the incident is not believed to be part of a larger structural problem.

“We are aware of the issues with this classroom and are confident this is an isolated incident, specific to this classroom,” she wrote. “We will open the room when it is fully safe to do so.”

An announcement released on November 18 regarding the temporary closure remains up on UBC’s Learning Spaces website.

When asked about her thoughts on the incident, Sun said this was the second time she’s experienced such an event occurring in the building

“My concern is, if we do move back in there, is this going to be a problem again?” Sun said.

Harley does not believe this will extend beyond the one classroom, but noted that “...the ceiling has been repaired once already ... but hopefully [UBC will learn] from past mistakes and the next repair is one that will last.”

The Biological Sciences Building was renovated and expanded in a subsidized, multi-year project that ended in 2019. BIOL 1000 was one of the classrooms added during this renewal.

Currently, all other spaces in the biological sciences building remain open and there is no set timeline for when classes can return to BIOL 1000.