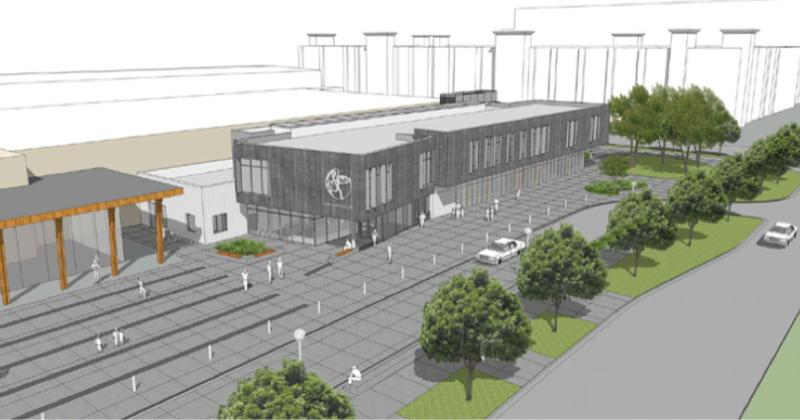 Construction on the Chan Gunn Sports Medicine Pavilion is currently underway and scheduled for completion by September 2017.

Located directly beside the Doug Mitchell Thunderbird Sports Centre, the $11.425 million facility will serve as the new home of the Allan McGavin Sports Medicine Centre — a space for clinical studies, research and teaching — and replace the former John Owen Pavilion.

The aging John Owen Pavilion was demolished in 2015 for the construction of the National Soccer Development Centre.

According to Robert Boushel — director of UBC’s school of kinesiology — the intersection of Wesbrook Mall and Thunderbird Blvd is an ideal location for the new Sports Medicine Centre because of its close proximity to the hub of athletic activity.

“[The Chan Gunn Pavilion] is quite central to the school of kinesiology, fairly proximal to the faculty of medicine building and also interfacing to athletics,” said Boushel.

The new facility derives its name from Chan Gunn, current president of the Institute for the Study and Treatment of Pain and one of the key donors for the project. Other sources of funding for the project include the Jack and Darlene Poole Foundation and the federal government’s Strategic Investment Fund.

“Originally, [the Gunn Pavilion] was planned to develop in two phases, but we were fortunate in being able to pull together sufficient funding to do both phases at one time,” said John Metras, managing director of infrastructure development at UBC.

A key feature of the Gunn Pavilion is that it will provide a larger working space than both the John Owen Pavilion and the Centre for Brain Health — the current temporary location for the Sports Medicine Centre.

The main level of the Gunn Pavilion will house clinical spaces, while the upper level will serve as research and teaching space.

Concurrently with the construction on the new facility now underway, the UBC school of kinesiology and the sports medicine division are partnering for the development of clinical, research and educational programming in various areas, including disease prevention and medicinal treatment.

The Sports Medicine Centre will also be forming partnerships with institutions outside the university in developing its programs.

“Some of our programming and research is going to be related to soccer medicine, and we’ll be partnering with other FIFA accredited centres to do some research around that,” said Jo-Ann Bateman, managing director of the Allan McGavin Sports Medicine Centre.

Even with its many areas of study focusing on programming and research, the Sports Medicine Centre is ultimately geared towards the study of exercise and physical activity.