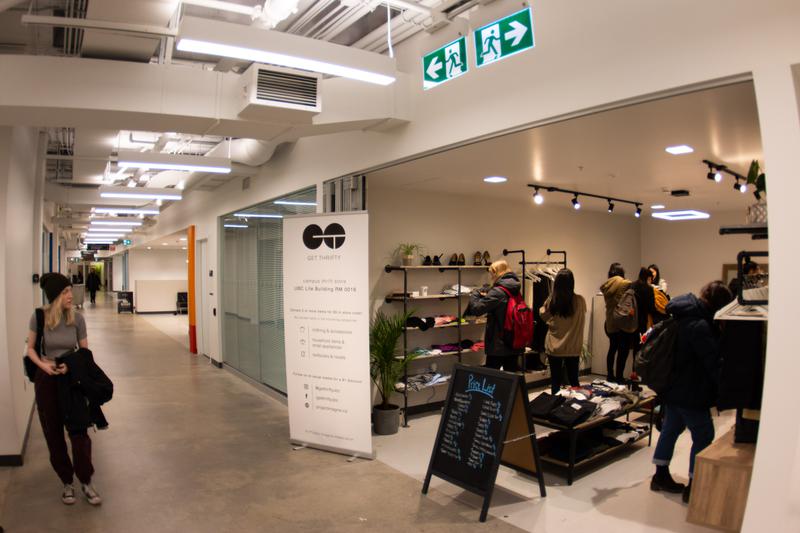 In March 2020, Get Thrifty opened its storefront in the Life Building. File Diego Lozano

Get Thrifty’s planned storage expansion has been stalled due to the AMS’s intent to renovate the Norm Theatre.

The AMS Finance Committee approved Get Thrifty’s budget in August to do a storage expansion. The on-campus thrift store was hoping to be underway with construction by September but the AMS has pushed back the construction to conduct a feasibility report for potential Norm Theatre renovations.

In March 2020, Get Thrifty opened its storefront in the Life Building basement and reopened with physical distancing policies in place on September 14.

Rain Chen, the store manager of Get Thrifty, said that due to the delay the earliest the store will be able to unveil its storage expansion is September 2021. VP Admin Sylvester Mensah Jr disputed this point, saying the student society believed the Get Thrifty expansion would be completed “way in advance of January 2021.”

The expansion would involve knocking down the wall behind the current store and expanding into the currently empty cavity there. Get Thrifty would then renovate the space to make it safe for use. However, the AMS is now exploring building a second floor in that space to be used for the Norm Theatre, Chen said.

“The [Get Thrifty] expansion would include almost doubling the retail space,” said Chen. “We would also have a small back [space] for our staff to be able to leave their stuff or even take their breaks, and then behind that would be our independent storage room.”

AMS President Cole Evans said that waiting until the feasibility assessment is complete could potentially lower the cost of construction of both parties, if the assessment does determine the parties will be sharing the space.

Evans added that the report should be complete in the next few weeks. If deemed feasible, the AMS would like to have construction on both the Norm Theatre and Get Thrifty happen simultaneously.

While Chen expressed concerns that the AMS only decided to look into using the space for the Norm when the thrift store proposed its own use of the space, Evans and Mensah Jr said the society has been looking at doing Norm Theatre renovations for over a year.

The Norm Theatre’s renovations are being partially funded by a $6.8-million surplus the UBC Board of Governors gave to the AMS and Graduate Student Society to allocate as they see fit. At the August 5 AMS Council meeting, Evans told Council that between $750 thousand and $1 million of the surplus could go to Norm Theatre upgrades for worn floors, seats and lights, among other things.

Evans said to The Ubyssey in late September that the society is also looking to get extra funding from the Faculty of Arts. Whether the Faculty of Arts chooses to give the AMS this funding depends on what it finds in the feasibility report, he said.

“We have a great opportunity this year to start doing some developments in [the Norm Theatre] and if possible to get it ready to go for when students are back on campus,” Evans said.

However, Chen said the delay in the expansion was “heartbreaking.”

“This budget was submitted for a storage expansion and then the very next day [the AMS was] like, actually we want to do a Norm Theatre expansion now too,” she said.

“I am always surprised when something goes according to plan [with the AMS].”