Greek life asked for help in dealing with cyberbullying on Greekrank. UBC did little.

Conversations with UBC admin about removing UBC's Greekrank page eventually died down by the early winter term, and then the issue was suddenly dropped.

Last August, UBC Sororities and the Interfraternity Council (IFC) teamed up in an effort to halt persistent cyberbullying — an effort that was stalled by the university.

In emails provided to The Ubyssey through a Freedom of Information (FOI) request, students in Greek life requested support from UBC administration to remove UBC’s discussion thread on anonymous forum Greekrank. Ten months later, the discussion board is still active.

Greekrank has been the site of recurring gossip, misogyny and cyberbullying — severely affecting the mental health of several members of the Greek community, some members say, to the point that the RCMP became involved in one dire case.

A call for help

Emails during late August last year show the UBC admin discussing how to address the issue after a sorority member reached out to President Santa Ono’s office, describing her damaging experiences of bullying on Greekrank.

“I want to take my situation and ensure that no additional members ever experience this harassment in the future,” wrote the sender, whose name was redacted in the FOI. 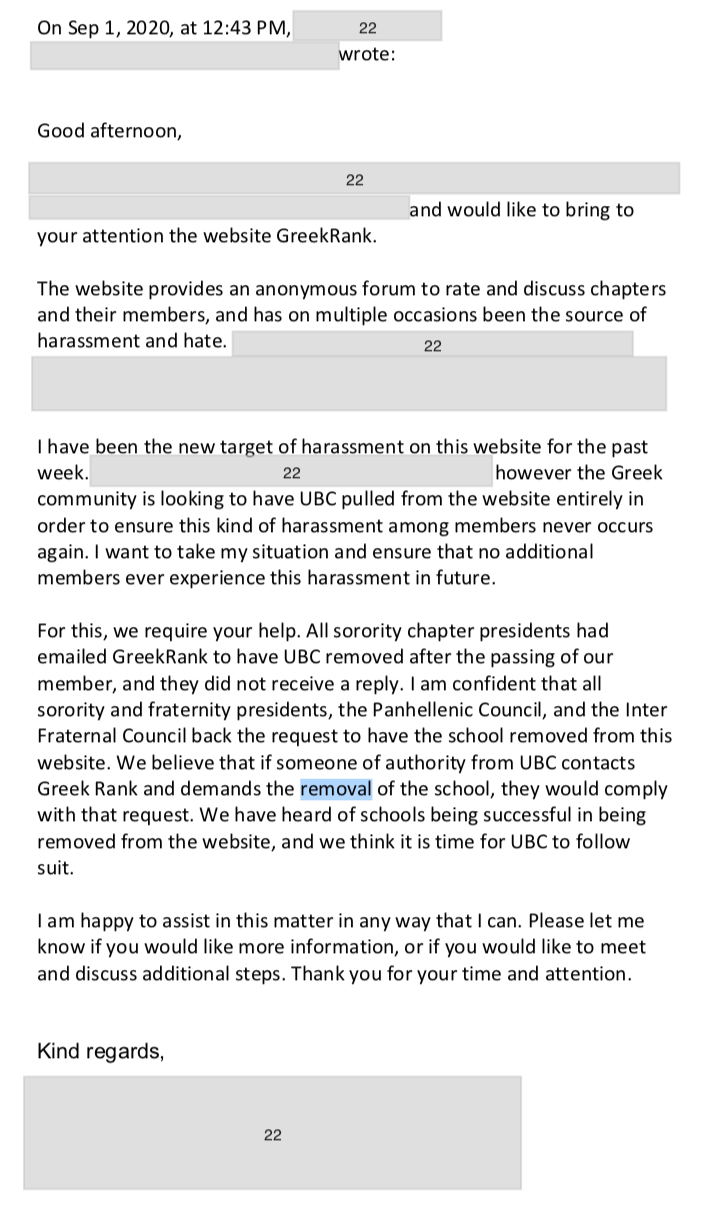 Email from the unnamed sender about Greekrank.

She asked UBC to help take down the online discussion board, stating that “all sorority chapter presidents had emailed Greekrank to have UBC removed after the passing of a member,” but Greekrank had not responded.

“We believe that if someone of authority from UBC contacts Greekrank and demands the removal of the school, they would comply with that request. We have heard of schools being successful in being removed from the website, and we think it is time for UBC to follow suit,” she wrote.

Llana Arreza, a fifth-year honours biology student and the chief recruiting officer for Kappa Alpha Theta, described Greekrank as “a safe space for strangers to say what they want” and a source of torment and mental health issues for her, her friends and chapter and other members of Greek life.

“It became a serious problem, one that really affected someone’s mental health,” she said.

Not knowing if it’s friends or strangers posting your name, job or what you study, Greekrank has molded a culture of distress and insecurity.

Arreza confirmed to The Ubyssey that the sender of the email to UBC admin, her friend, had battled depression and suicidal thoughts, and had to go to paid therapy sessions due to the extremity of what was being written about her on Greekrank.

“It hurt to see her affected by people she didn’t even know,” said Arreza. “[Anonymous users] were telling her to kill herself, leave UBC, leave the Greek system…”

The anonymity of the site makes it easy for people to make public personal conflicts, Arreza said.

Although some users ask harmless questions about recruitment events, users frequently criticize fellow chapters. Many posts are dedicated to establishing a rank or hierarchy of sororities and fraternities; others focus on comparing members’ looks — such as ranking sororities by the hotness of members through a “cutie score.”

“It does strengthen misogynistic and patriarchal views, because a lot of the posts promote [the stereotype] that us women at UBC sororities can be quite literally ranked by how we look,” said Arreza.

“Especially during recruitment times, things tend to escalate quite a lot because obviously you want incoming members to think certain sororities are better than the other.” 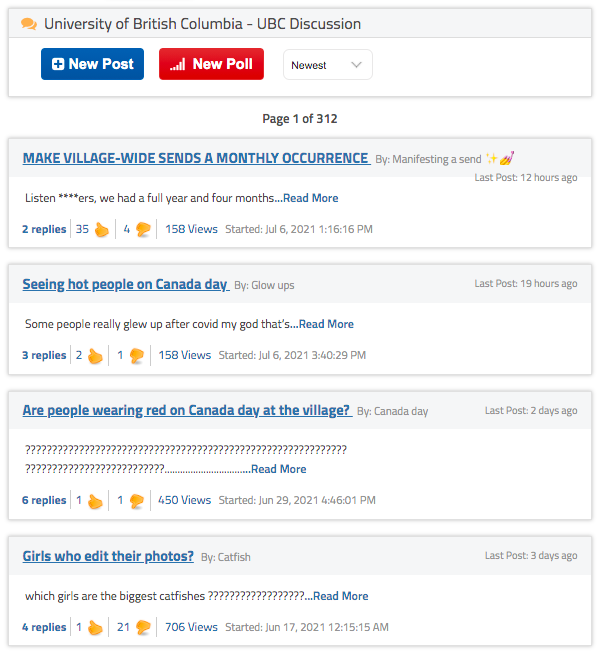 Screenshot of UBC's page on Greekrank.

Another post targeted the newer members of a sorority for being “weird sjws” for discussing political issues at a party, as opposed to the “hot fun girls'” the sorority used to have.

While there is a banner that comes up before you post which warns against posting “names, initials, or other derogatory content,” that doesn’t deter everyone.

According to Arreza, full names have been posted on several instances. While initials are used more often, context clues hint at which individuals are being discussed, where “really nasty” and “not so very nice statements” are made.

Individuals can pay to have posts removed, but otherwise, it is unclear how consistently or rigorously the site is moderated for harassment.

Emails between VP Students Ainsley Carry and Senior Director of Student Engagement Amandeep Breen in early September obtained through the FOI request floated an idea to help students draft a letter requesting Greekrank to have UBC’s forum removed from the site.

“I wonder if the approach is to help students get their individual names and identities removed, rather than UBC,” wrote Carry in a September 1 email.

“The harm is being done at the individual level, rather than the institutional level. Can we help students format a letter that will come from them to request their name be removed from the site?”

But that seemed to be the extent of UBC’s assistance, confusing members of the Greek community.

Arreza said UBC admin were very responsive to her friend — as emails show them scheduling meetings with the sender to provide support. According to Arreza, the sender and Carry had a productive discussion about removing UBC’s forum, which led to back-and-forth conversations between UBC, the IFC and UBC Sororities during the fall to have the VP Students Office approve the letter.

However, conversations eventually died down by the early winter term, and then the issue was suddenly dropped.

“No one really knows why, which is really unfortunate,” said Arreza. “A lot of the executives in UBC fraternities and sororities were very excited that it was finally happening … I was very much disappointed because I really got my hopes up for making UBC a much safer space for the Greek community, and then just nothing happened.”

“This website is not controlled by UBC and therefore not subject to university oversight,” said Ramsey in a statement to The Ubyssey.

According to emails in the FOI, UBC employees attempted to track the website and found it registered anonymously in Arizona. With institutional intervention into Greekrank not forthcoming, UBC left it up to students.

Ramsey emphasized that the university’s mental health services are available for cyberbullying victims.

“In the past we have asked members of [the] UBC Greek community to refrain from contributing any comments to this website. Our authority to instruct students on which websites to engage is limited,” he said.

As a leader and senior member, Arreza feels a responsibility to protect sorority members from Greekrank, but she said it doesn’t seem fair that she has to keep a watchful eye just to make sure personal and private info of women don’t get posted.

She says executives try to discourage girls from posting on the site, or even look at it. Yet, avoidance doesn’t censor nor remove harmful content on Greekrank.

“Technically, it’s not [UBC’s] responsibility, but it’s affecting lives at this point. I don't think [UBC’s decision to step away from the issue] should have to affect people's lives and mental health and well being.”

This article has been updated to remove reference to the passing of a member that was potentially connected to cyberbullying on Greekrank, a point that was not properly fact-checked. The Ubyssey regrets this error.