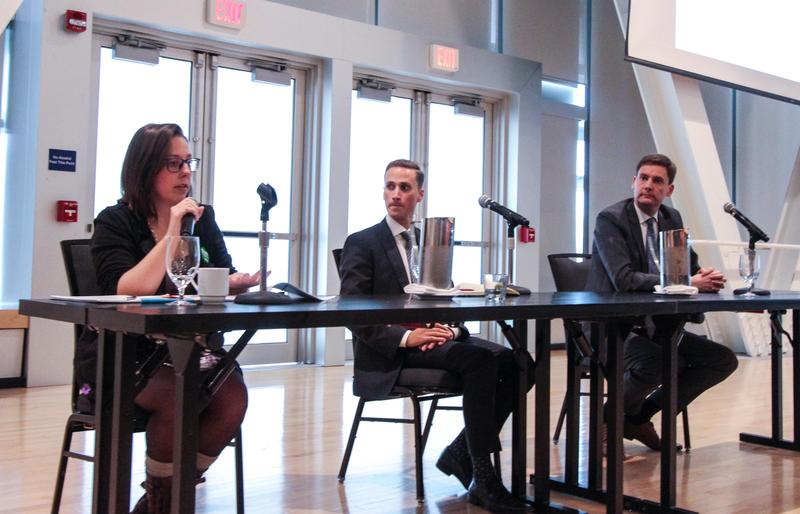 Ahead of the BC provincial elections in May, the AMS, The Ubyssey and UBCC350 hosted a debate between three of the candidates vying for the Vancouver-Point Grey riding. Amanda Konkin, David Eby and James Lombardi debated issues that relate to students such as student loans, affordable housing and transit.

Amanda Konkin, a UBC graduate in political science and theatre, is the BC Green Party candidate. Nominated for the Point Grey riding in February, she runs on the Green platform of investing in co-op and work experience programs and introducing basic income support.

David Eby, the incumbent MLA for Point Grey since May 2013, is the New Democratic Party (NDP) candidate seeking re-election. He currently serves as the opposition critic on housing and Translink. The BC NDP platform includes increasing minimum wage to $15 and building rental housing.

James Lombardi is the BC Liberal candidate, having left his position as head of global business development of We Day. The BC Liberal platform includes bringing ridesharing to the province and investing in building facilities on university campuses.

The debate, moderated by The Ubyssey, opened with the issue of rising tuition and how to make post-secondary education more affordable. The candidates each responded true to their party platforms — Konkin pushed the Green’s task force to re-examine “what it means to have a university degree,” Lombardi talked about the Liberals’ promise to make sure universities have the resources they need and Eby chose to deviate and touch on the high cost of rent for students in Vancouver.

On the contentious issue of the overcrowded 99 B-Line, Eby said that he supports the extension of the Millennium Line to UBC given the thousands of people who commute back and forth in the area.

“It’s only going to get worse, not better,” he said. “You need a champion for rapid transit out here at UBC and I will be that champion for you.”

Lombardi rebutted. “There’s no question that if there was a subway line out to UBC that we would see the benefits, people would enjoy it, people would use it — that would be great. But the reality is that we have limited resources in the provincial coffers,” he said. “How are we going to pay for all of this without raising taxes and saddling future generations?”

In response, Eby asserted that the NDP’s plan can be responsibly funded if the government prioritizes investing in affordable transit and childcare.

Konkin emphasized that transforming the way that education works means that less time will be spent on transit. Introducing more co-op opportunities and other ways to spread out education programs, she said, will alleviate the strain put on transit by the concentration of students who commute daily to campus.

On the issue of tenancy rights in Vancouver, Konkin and Lombardi largely agreed on how to make sure the rights of renters are protected: priorities such as controlling rent increases and increasing rental stock. Eby focused on restoring the residential tenancy branch, which took care of tenancy rights violations and now faces funding and staffing cuts.

In their closing statements, every candidate urged the audience to vote in the provincial elections on May 9, emphasizing the importance of young people voting.

“People tell me everyday that millennials can’t engage, won’t engage, don’t engage; can’t vote, won’t vote, don’t vote,” said Lombardi. “If we want to get young people engaged and out to the polls, we have to speak to the issues that matter to them.”

The Ubyssey also live-streamed the debate — watch the video in full on our Facebook page.