New residential buildings being built off of University Boulevard 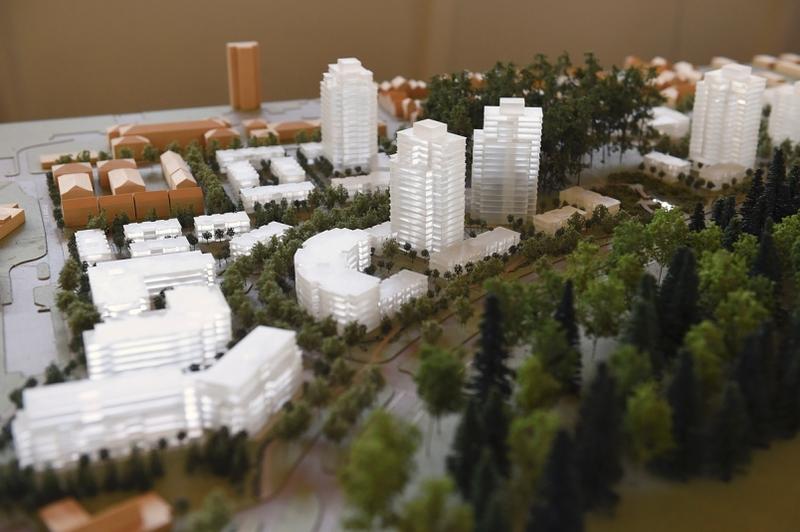 Musqueam First Nation has started development of Block F, a parcel of land bordered by University Boulevard, Acadia Road and Pacific Spirit Park. The land will be developed by the Musqueam Capital Corporation over the next 10 to 12 years, and will include a range of residential buildings, a community centre, coffee shops and a grocery store, as well as designated parks and wetlands.

Signs posted around the Block F enclosure read “tree harvesting in process.” The signs have some community members wondering if this is a diplomatic label for environmental destruction. But the signs mean exactly what they say — rather than taking the trees to be processed elsewhere, the Musqueam Nation intends to keep the trees close to home.

“We are honoured to be able to repurpose trees for use throughout Block F and for the use of the Musqueam people,” said Jay Mearns, operations manager of the Musqueam Capital Corporation and a Musqueam band member.

Wood from the cleared trees will be incorporated into structures in the Block F development. The trees will also be used by the Musqueam people for cultural purposes like art, weaving and smoking fish, as well as for house posts and shaping canoes.

The parcel of land is roughly one-sixth the size of the adjacent University Golf Club. The Province of BC returned this piece of land to the Musqueam people in 2008 as part of the Reconciliation, Settlement and Benefits Agreement.

“Block F will kick-start the band’s strategy to become economically self-sufficient, which means less reliance on government transfer payments,” said Mearns. According to him, developments like Block F provide opportunities for education, business and employment that would not otherwise exist.

Block F was designated to the Musqueam Nation as “fee-simple” land, meaning that the Musqueam people have the right to do with the land as they wish. This development is one of a number of revenue-generating projects intended to grow the economic independence of the Musqueam First Nation.

The Musqueam people have been protesting the lack of recognition of their ownership over the land since 1872, and then in 1976, they adopted a declaration that affirms that ownership.

The planning process for Block F included extensive consultation with UBC and various community members. While UBC is not involved in the development itself, they noted that the new residential buildings may benefit the growing demand for housing around the university.

“UBC is focusing on housing on campus. But new housing and a range of housing is good,” said Michael White, associate vice-president of Campus and Community Planning. According to White, concerns raised by current community members around changes to transit, cycling and pedestrian routes have been addressed by the Musqueam Capital Corporation and the University Endowment Lands.