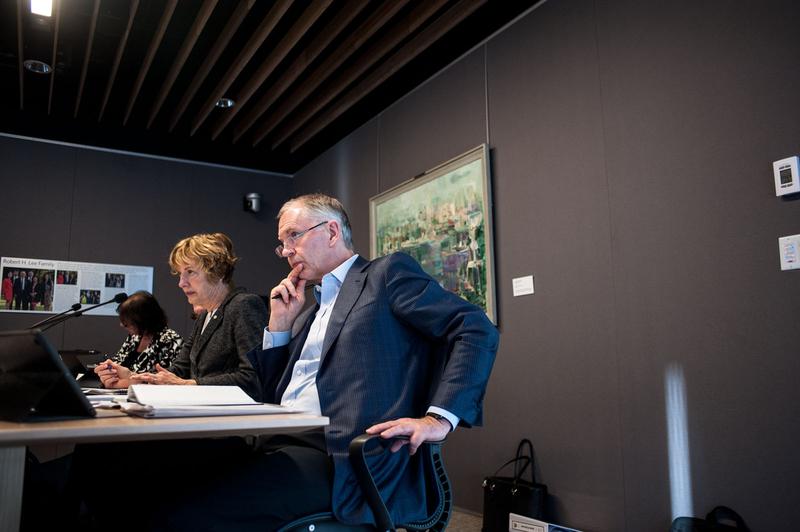 Chancellor Lindsay Gordon, pictured above, is the chair of this year's presidential search committee. Photo Kosta Prodanovic / The Ubyssey

The consultation period is drawing to a close for the job description development of UBC’s next president.

The search committee spent several days meeting with key stakeholders, including alumni, past presidents, the Faculty Association, the AMS and the GSS. Comments were also elicited from external actors such as Aboriginal groups, senior donors, municipal and provincial governments, as well as the presidents of organizations such as the Canadian International Development Agency and the Vancouver Board of Trade — a full list can be found here.

In addition, the committee held two town halls — one in Vancouver and one at UBC Okanagan — and solicited comments from the general public via an online web form, which Chancellor Lindsay Gordon said had been surprisingly successful.

“One of the reasons why being president of a university is such a challenging job is that you have to deal with this multiplicity of stakeholders who often have different views about what the [president’s] priorities should be,” said Gordon.

The process to find UBC’s next president has been expedited. Gordon noted that a normal timeline for this type of headhunting is a year, compared to this search which is expected to take nine to ten months due to Martha Piper’s commitment to remain as interim president until June 30, 2016.

However, Gordon has remained firm throughout the search process that stakeholder consultation will not take a hit due to a time crunch. A greater emphasis on consultation is the main thing he cites as being different from the last presidential search in 2013-14.

“Lindsay Gordon has done, from my perspective, a much better job of keeping the community aware of where we’re at on the timeline and really inviting feedback,” said Aaron Bailey, AMS president and member of the presidential search committee.

“It is a very enlightening, yet arduous, process meeting with that many people. It’s so interesting to see some of the similarities, but also the differences that different people in such a complex environment have expectationalized [sic] for somebody like this,” said Bailey.

The leadership qualities discussed at the Vancouver town hall and at the AMS Council discussion later that evening were representative of this difference.

At the town hall, members of the UBC administration and of the community expressed a need for a leader who was experienced in academia and leadership.

Next comment: we need someone who will make this a top 6 in TEACHING university #ubcpsc

Next: ask them for proof of their moral values, what's their experience in successful leadership @ research-based institutions #ubcpsc

AMS councillors emphasized a need for a president who would contribute to the culture at UBC and engage with students in a meaningful way.

Gurvir: a president who's engaged and tries to enable students #AMSCouncil

Robin: someone who believes in the potential of UBC, who has an attachment to the university and a vision for it #cheeeeezzz #AMSCouncil

“There are clearly some strong common themes, such as leadership experience in a large university environment, having the right values, having team-building capacity, to work across all the different stakeholder groups, to have cultural sensitivity, to be a distinguished academic, to understand academia,” said Gordon.

The candidate profile of the next president will be released within the week or so.

“Will people look at the document and say, ‘I agree with everything in it’?” asked Gordon. “No, that’s the nature of a university. There’s always going to be some degree of what I’d argue is healthy disagreement. But I think there are some common themes and I think most people will feel pretty confident about what they see in this document.”

He noted that the time span between the profile being made public and candidate identification would be short. “We’re already doing that to be honest, but we won’t get into any discussion with candidates until probably the second half of next month,” said Gordon.

What's the single most important quality that UBC’s next president should have?