A student was concerned about her residence self-isolation experience. UBC said it was an anomaly 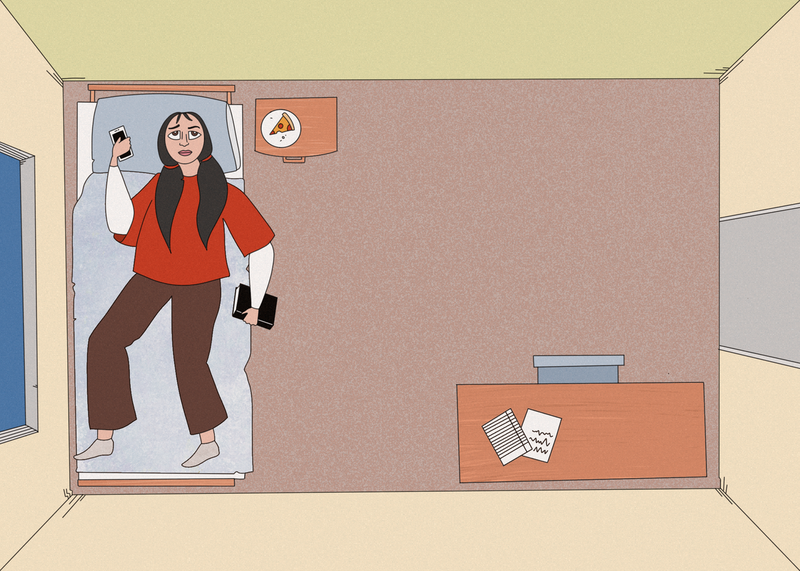 “I would probably say it was … one of the worst experiences I could have ever had.” Maya Rodrigo-Abdi

When first-year student Claire got a call saying she tested positive for COVID-19, she wasn’t expecting her residence self-isolation experience to be as disorganized as it was.

Once Claire, an Orchard Commons resident, received the result in early November, she contacted her residence life manager as her sister, a former RA, told her to.

But following miscommunication with her residence life manager (RLM) and the conditions of her self-isolation suite in Walter Gage residence, she’s concerned about UBC’s self-isolation protocols, particularly as UBC plans to double the number of first-year residents in January.

As residences gear up for an influx of students returning to campus for term two, UBC said that this incident was only a blip in a majority of positive self-isolation experiences.

Claire called her RLM shortly after she found out she tested positive, and he told her that she would need to self-isolate. But Claire, who shares a unit with a roommate, was concerned when the RLM said that the roommate didn’t need to self-isolate as well.

“I was like, ‘You’re telling my roommate who just came in close contact with someone who tested positive for COVID can go down to the dining hall where all the students in Orchard Commons eat dinner?’” Claire said.

Claire claims the RLM changed his decision about the roommate after she brought up that public health had also advised her roommate to self-isolate. The pair packed their things and walked over to Gage that evening, but Claire said the RLM’s directions to the unit were unclear.

When she arrived, she said her self-isolation unit didn’t have any linens ready. Upon phoning the front desk, she said she was provided flat sheets, pillowcases and towels — but no blankets.

The Student Housing and Community Services (SHCS) self-isolation suite website says that linens will be provided as part of the self-isolation package.

Claire also said the RLM told her that her Orchard Commons meal plan would transfer to the self-isolation suite, but front desk staff told her that this was not the case and that she would have to pay $45 per night for three meals a day.

Andrew Parr, managing director of Student Housing and Community Services (SHCS), apologized for the situation in an emailed statement to The Ubyssey. He said that linens were provided to the student the following day, and that Gage staff were mistaken in telling the student that there was a meal plan fee.

“We appreciate this was a stressful time for the student and we apologize to this student for the errors,” he said.

Public health phoned Claire the following morning to begin the contact tracing process, but found out that her incubation period of ten days after her symptoms began had passed. She left Gage that afternoon.

According to the BC Centre for Disease Control, people with COVID-19 must self-isolate until ten days after the onset of symptoms, they no longer have a fever without medication and they feel better.

‘No shift is perfect’

The university is offering free self-isolation packages to international students travelling to Canada for term two. According to its website, residents are required to abide by COVID-19 guidelines, such as staying at one’s place of quarantine and not having visitors over.

SHCS also advises students to prepare a “self-care plan” for mental and physical health, and to arrange food accommodations if they don’t opt for the self-isolation meal plan.

Students who aren’t returning to Canada from out of country are ineligible for the free package and must pay $966 plus tax for 14 days, with an optional 14-day meal plan for an additional $630 plus tax.

Parr said that the program has run smoothly for the most part so far.

“I’m confident the vast, vast majority of our student residents have been very well served by our staff during these challenging times,” said Parr. “But no shift is perfect and human errors are made.”

Claire said that UBC should have ironed out any problems especially since more first years will soon be self-isolating.

“I was very shocked because I thought UBC would be prepared for this,” she said. Students have previously raised concern over SHCS’s handling of possible COVID-19 cases in residence and residence life managers being the designated single point of contact.

However, Parr said that SHCS’s response to this situation reflects the department’s flexibility.

“While we make every effort to eliminate errors from our system we also realize we cannot eliminate [them] all,” said Parr.

“How we then react to these situations is important and in this case I am confident the situation was corrected quickly and thoughtfully.”