Return to campus course released a month after school start due to prioritization of vaccine, rapid testing processes, UBC says 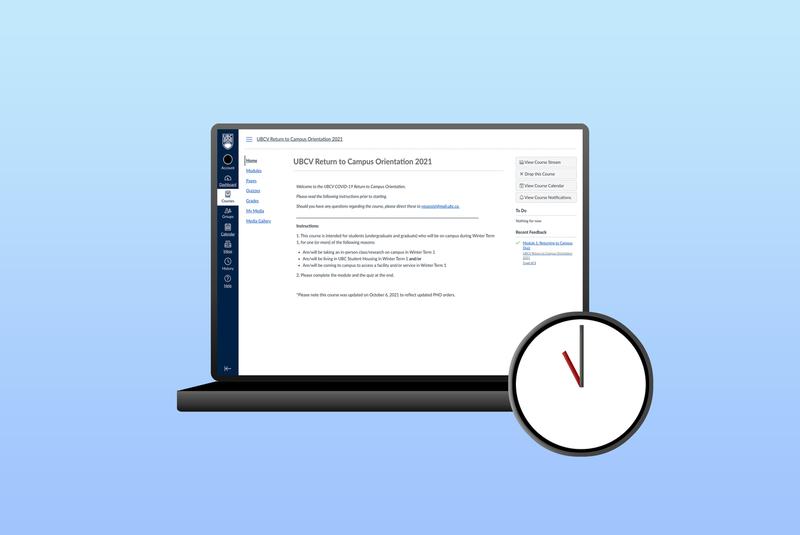 Some students expressed concern that the course came out too late. Isabella Falsetti

Nearly one month after school started, UBC told students to complete a mandatory return to campus orientation course by October 18.

The course, which UBC announced on October 5 via email and Canvas, is a requirement for all students who either live in residence or are coming to campus for classes, research or to access facilities. It includes UBC campus rules, a list of wellbeing services and programs, student responsibilities, the September 28 Provincial Health Order and other COVID-19 protocols.

Some students expressed concern that the course came out too late.

“It probably would have been more effective if it had come out a little earlier,” Anusha Bose, a fourth-year marketing student, said.

Other students, however, didn’t think it would have made a significant difference in their knowledge on COVID-19 had it been sent out at the beginning of the term.

Aiden Meharg, a second-year statistics student, thought that prior UBC communications had had sufficient information on the universities COVID-19 rules and protocols. “A lot of that information … was already mentioned in emails [from UBC].”

“It was mostly information that I’ve seen already. I just kind of whipped through it,” he added.

Keegan Lott, a second-year civil engineering student, agreed. “There wasn’t much new information. It was easy to complete, it wasn’t a hassle or anything.”

Matthew Ramsey, director of university affairs for UBC Media Relations, wrote that the university sent this course in the beginning of October, rather than before classes began, because its priority in the first few weeks was its rapid testing program and vaccine verification process.

“We’re confident the course will add to student knowledge of COVID safety protocols and their responsibilities in keeping the campus as safe as possible,” he wrote.

Ramsey added that UBC will contact students to remind them to complete the course if they haven’t done so.

However, many students have expressed frustration regarding how UBC has handled its in-person return to classes. International students have said that there have been unclear guidelines on vaccine passports, with some places accepting out-of-province or international vaccine cards but others not. Moreover, while students are required to either disclose vaccination status or undergo rapid testing, UBC visitors are not.

UBC COVID-19 protocol’s do seem to be working, according to available data. While there is little information about commuter students, the British Columbia Centre for Disease Control reported that UBC has low daily cases and a high vaccination rate.

Update at 1:23 on October 20,2021: This article has been updated to add a further comment from Ramsey on how UBC will ensure students complete the course.