Everything in Santa Ono's contract, explained 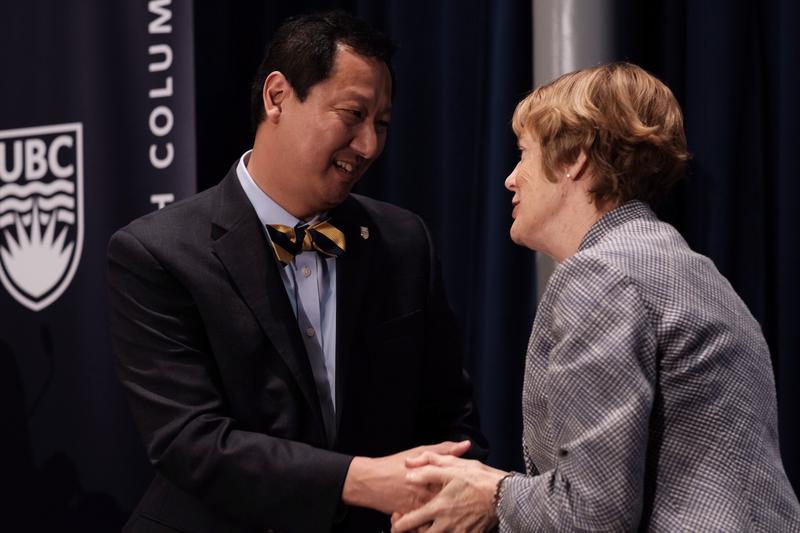 First of all, here are the contracts of the last two UBC presidents: Gupta, Ono.

Santa Ono is taking the reigns at a rather tumultuous time for the university — the reason for much of that tumult being none other than the previous president, Arvind Gupta. Well, not exactly him so much as the circumstances surrounding him — UBC's Board of Governors, faculty and even students became embroiled in #GuptaGate after Gupta's sudden, unexplained departure.

This piece aims to explain everything contained in Ono's contract, using Gupta's as comparison when necessary — unless otherwise noted, the details of the Ono contract are the same as Gupta's.

Here's a mini video explainer if you just want the basics:

The first interesting point comes in the wording. Right from the get-go, Gupta's contract is no-nonsense.

Ono's contract, however, makes use of phrases like "spirit of cooperation," and "leader within the community."

From here, passages are copy-pasted — the duties and powers granted to each president in section 1.3 are basically identical, outlining how the president is to go about managing faculty, creating policies, etc.

The president has always owed a fiduciary duty to the university — meaning they are to always act solely in UBC's best interests — but those words appear nowhere in Gupta's contract.

Each contract then talks a bit about the annual performance review that the president will undergo. Different phrasing, but with the same idea.

Interesting note: in Ono's, it says they may make the report public, after he and the Board chair (Stuart Belkin) discuss it. Regardless, it will be accessible with a Freedom of Information request. Here's the how to do that — all it takes is one email.

This section begins with some standard information regarding the five-year term for which the president will be appointed (August 2016 to August 2021) (2.1), what the university will do in case Ono becomes seriously ill (2.2) and how they'll go about firing him, if that becomes necessary (2.3). The firing section has Ono waive his right to raise a couple of legal defences, including:

Ono can resign his post as president with three months' written notice, and UBC can fire him at any point for no reason.

If he is fired as president, though, he can choose whether to stay on as a professor in the Faculty of Medicine. Whether or not he elects to resign as a prof, he'll be paid severance of 12 months' pay at his presidential salary of $470,000.

If he does get fired, he'll also have to give back all property belonging to the university, including "books, documents, computers, phones, devices, records, data, notes, reports, proposals, lists, sketches, correspondence, materials, effects, money [and] securities."

His contract also allows for the introduction of performance-based pay, which would be tied to the completion of goals set out by the Board.

The Norman MacKenzie House is the official residence of UBC's president, whoever that may be.

The contract specifies that the house will sometimes be used for UBC functions (4.1), but that those will be allowed only at the approval of Ono, as long as he is "acting reasonably."

It lets him know that the house is a taxable benefit, and that he will be reimbursed for any tax liabilities resulting from the house (4.2, 4.4) and that UBC will take care of any repairs and cleaning that the house may need (4.3, 4.5).

UBC gives its presidents a car.

Ono doesn't get to pick it, though. An "appropriate automobile" is selected by the chair of the Board. Gupta got a $37,000 hybrid, so something similar can probably be expected for Ono.

UBC presidents get reimbursed for any expenses they might incur while they undertake business related to being the president, including travel, once they're reviewed by the Board chair to make sure they're legitimate. Toope was reimbursed for $182,948 in 2013/14.

The university will also reimburse expenses for Ono's wife when she accompanies him on business travel — as long as her accompaniment is approved by the Board chair in advance of that travel.

He also gets this. Screenshot via UBC

Along with the presidency, Ono will be appointed as a professor without term — the equivalent of having tenure — in the Faculty of Medicine (8.1). He's said that his true passion lies in teaching, and he plans to do some while he's here.

He won't be paid a professor's salary in addition to his presidential one, even if he teaches (8.2). Of course, if he resigns or is fired as president and wishes to continue as a professor, he'll be paid (8.3). That might actually work out better for him financially, as the highest-paid faculty member in Medicine makes more than Ono will as president.

Ono will be entitled to a one-year paid leave of absence as long as:

If he's re-elected as president once his term expires in 2021, he'll be able to take his leave of absence once his new term ends. This could potentially repeat ad infinitum.

Here's a list of the benefits Ono will receive as president:

UBC will reimburse Ono for any "reasonable" costs incurred in the process of moving his family from Cincinnati to Vancouver, and in moving from the Norman Mackenzie House to another place in Vancouver once he is no longer president.

Ono and the university promise to act fairly and in good faith in their dealings, and not to tell any secrets about each other unless they are required by law to do so.

Ono has to let the Board chair know by September 15, 2020 if he wishes to continue as president (13.1). A special committee of Board members — the Select Committee — will then secretly review his performance and decide whether or not to reappoint him (13.2), then meet with Ono to discuss their findings (13.4).

If the Select Committee decides that he should be reappointed, they will meet with the Executive Committee* to discuss terms of reappointment (13.5). When both committees are in agreement, they will bring their recommendation to the rest of the Board (13.6).

If the Select Committee decides that he should not be reappointed, they will make that recommendation to the Board, but ultimately the Board has the sole power to reappoint or dismiss Ono (13.7).

*Note: In Gupta's contract, this role is filled by the Management Resources Compensation Committee. That committee was absorbed by the Executive Committee.

This part defines some specific terms and outlines how to interpret and apply the contract. If this article does its job, then this isn't something you need to worry about.