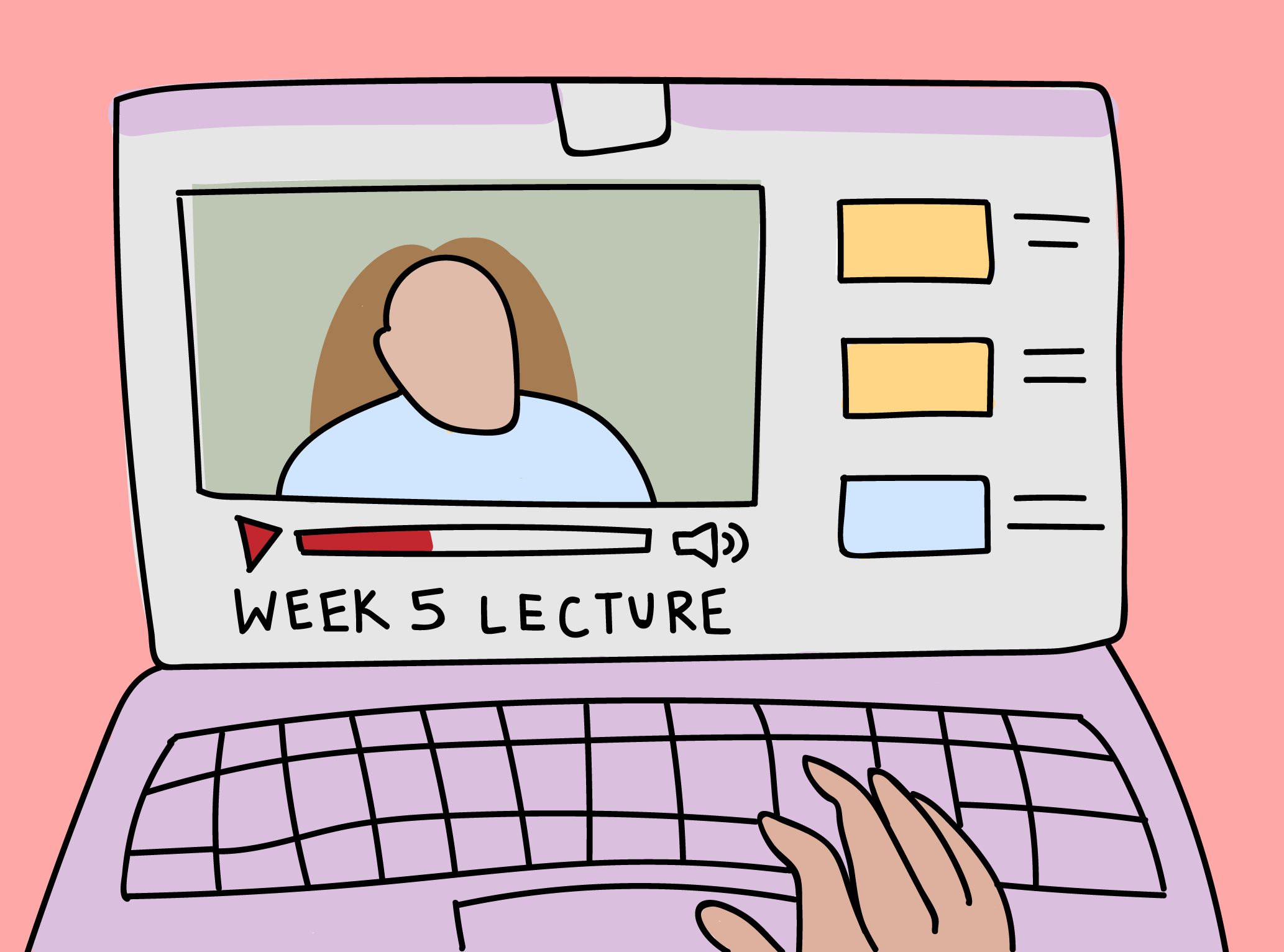 "It offers me the freedom to speed up the lecture if it is slow, pause it to take clearer notes, and to replay key sections so that I actually grasp the context." Maya Rodrigo-Abdi

The right to a 'bad hair day': Will lecture recordings catch on at UBC?

Many other universities like McGill, SFU and UC Berkeley record lectures for their students, but UBC limits the services to certain faculties. Could lecture capture be implemented campus-wide in the future?

Pausing, rewinding, speeding up, slowing down.

When attending a typical lecture, students have no such way to adjust it to their learning style. But with lecture capture systems that film lectures and then publish them online and other forms of recording, students can.

Lecture recording and lecture capture became a topic of conversation during this year’s AMS elections. Nick Pang, who ran for VP Academic and University Affairs and successfully won a seat on Senate, focused his campaign on the idea of implementing lecture capture throughout UBC. Pang also works under the AMS presidential portfolio as the Executive Projects Assistant for Policy and Governance.

As a student in the Faculty of Pharmaceutical Sciences, all of Pang’s class lectures are recorded and then made available online.

According to Shaun Filwok, the Senior Manager at Audio Visual Services, lecture recording has existed at UBC for ten years, but its use is limited to specific faculties and special events.

“Currently on campus there are a total of 40 media recorders installed in a variety of classrooms across different Faculties,” Filwok wrote in a statement to The Ubyssey. “The Faculty of Medicine, Faculty of Pharmaceutical Sciences and the Sauder School of Business are a few of the largest users of media capture services.”

Many of the technologies needed for expanding lecture capture are in place, but Pang’s concern is “why they [aren’t] being utilized, and what we could do to get them to start being used.”

When The Ubyssey reached out to students online, many expressed support for expanding lecture capture and lecture recordings.

Reddit user Bigmaq wrote, “It offers me the freedom to speed up the lecture if it is slow, pause it to take clearer notes, and to replay key sections so that I actually grasp the context. Having them recorded also means that I don't immediately fall behind if I miss a day of lectures for whatever reason.”

Others echoed that it allows them to adjust the lecture speed to match their learning style and go over particularly difficult concepts.

“Lecture recordings are a godsend at the end of an eight hour day, when you're struggling to stay focused,” user PeachBBT wrote. “Also [they’re] really good for double-checking your notes when lecturers are unclear or going too fast.”

Lecture capture isn’t without drawbacks. Decreases in attendance, intellectual property rights, and the expensive costs of equipment are all causes for concern.

But Pang thinks a decrease in attendance may actually benefit the university.

The University of California, Berkeley has taken lecture recordings into consideration when scheduling space for some classes, assuming that some students will not attend class because of the recordings. Seating is first-come, first-serve and those who don’t get a seat or decide not to show up at all can watch recordings online.

Pang said by increasing lecture recording and adopting this mentality, UBC could solve their issue of academic space.

“When students are sick, they don't have to drag themselves out of bed and show up to class and fill up the lecture hall when the university can put a class of 300 in a lecture hall of 200,” he said. “That can save a lot of space for the university.”

But professors are also concerned about protecting their intellectual property.

French and Medieval Studies lecturer Juliet O’Brien expressed concerns about the ownership of the videos and how they’re going to be used.

O’Brien said that the university should respect a faculty member’s desire not to be recorded.

Just like how some teachers may not want to be recorded, O’Brien emphasized the issue of student intellectual property and privacy as well.

“[If a class was being recorded,] you would need to have consent of the students, if you have a class where you've got more interaction,” O’Brien said.

She also expressed concerns about how recording could negatively impact student participation in class, especially in foreign language courses.

“... You're trying to make this a safe environment where they can say whatever they like, where they can make mistakes in their French, and nobody's going to watch it afterwards,” said O’Brien.

Videos as a learning resource

While computer science professor Gregor Kiczales doesn’t think that lecture capture should be widely implemented, he did stress the importance of using video in teaching.

“If what you mean by lecture is sort of a traditional lecture where somebody stands up and talk for a while, I'm not sure you're adding anything by making a video capture of that. You're certainly not using video to make anything better than bad recording,” Kiczales said. “The real thing I think we figured out in the last five years [is that] you can do much more with video than just recorded a traditional lecture.”

Kiczales and the computer science department employs a ‘flipped-classroom’ method, where they distribute video explanations of some of the most complex topics and allow time in class for working on assignments and asking questions.

O’Brien said that video recordings can also be useful for evaluating how students speak in foreign languages.

“If you try to have an oral exam, it would take up quite a lot of time,” she said. Instead, she assigns students to film themselves speaking french in creative ways, such as putting on fashion shows or conducting cooking tutorials.

Even with much of the technology available, UBC has yet to fully expand the scope of lecture recording, and the Centre for Teaching, Learning and Technology didn’t comment on the potential for expansion going forward. Faculty skepticism may be a major reason.

O’Brien emphasized the need to “take care” when using this technology, and while it’s not a tool to be thrown out entirely, she does have a personal preference.

“I would much rather have audio than video,” O’Brien said. “You have a basic right to having bad hair days.”

“I'm not against [lecture capture,]” Kiczales said. “I just think that if the university is going to spend money doing something, there are much more interesting things to do with video.”

This article was updated to correct Dr. O'Brien's position as a lecturer, not a professor.