Not funded by tuition, $365,000 art project to move forward with month-long installation period 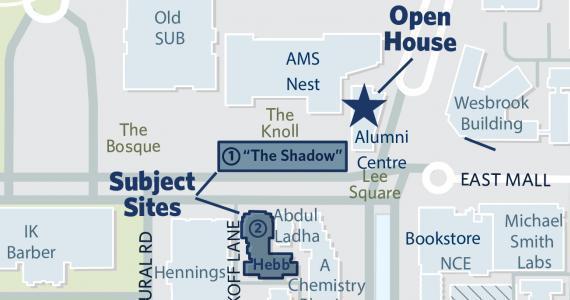 The location of The Shadow’s installation UBC

In mid-November, UBC is set to install a public art piece called The Shadow in the plaza next to the Nest. Its construction is expected to last just over a month.

Designed by Lithuanian-born artist Esther Shalev-Gerz, The Shadow is a 22 by 100 metre horizontal image of a Douglas Fir, created using a dark type of paving added into the typical pavement blocks seen on campus.

Shalev-Gerz was selected for the project by the University Arts Committee following her 2013 exhibition at the Morris and Helen Belkin Art Gallery. Her pending installation is part of an ongoing effort to bring more public art to campus.

But while UBC’s urban planning team is excited about the prospect of more public art on campus, The Shadow’s rollout has been stymied by negative student responses — many of them rooted in the misconception that the piece’s $365,000 price will be derived from their own tuition funds.

Michael White, vice-president of Campus and Community Planning, clarified that that’s not the case.

“It is not being funded with academic funding,” said White.“The source of funds is split in half. Half is from donors, and the other half is from the public art matching fund.”

Created in 2011, the Matching Fund for Outdoor Art is a $2.5 million allotment for the creation of public art on campus, with the goal of “improving the interest, engagement and vibrancy of the public realm.”

The fund matches private donations — like those made for The Shadow — to make funding large-scale public art projects more realistic. While the matching fund is technically UBC’s funding, White said it’s funded via a community surcharge on developers, the proceeds of which are already earmarked for community improvement.

“Development cost charges are used for systems in communities — water, sewers, public realm and public art.” said White. “In most municipalities, those charges often go to art infrastructure as well as public art.”

Another critique from many students was that The Shadow would bring more construction to a high-traffic part of the campus — one that is quickly tiring of development. In an opinion piece published in The Ubyssey last month, first year student Alirod Ameri wrote that “adding more detours would just create another headache for students and staff trying to get around.”

Barbara Cole — curator of outdoor art at the Belkin Art Gallery and one of the key figures in the Shadow’s installation — believes that student frustration is due less to the work itself and more to a general “construction fatigue” around campus.

“Because we love public space … when we have an issue with how it’s used, the incoming artwork becomes the centre of that,” said Cole. “And in fact, it’s actually something else that’s causing that — that concern or that anger.”

White said that during the installation, UBC will work with the AMS to minimize disruption to foot traffic.

“The project services team is meeting with the AMS to make sure that the construction management plan is in place and is going to meet the interests of the campus community,” said White.

“People will be able to access and walk around the site when construction takes place.”

In the future, the University Art Committee also intends to continue seeking out artists interested in pairing with individual faculties and spaces for long-term public art projects, and aims to secure donations and funds to continue it, according to Cole.

“Try to imagine a city or a place where there isn’t art,” she said. “It allows us to see the things that are teetering on the edge of disappearing because they’re so familiar.”