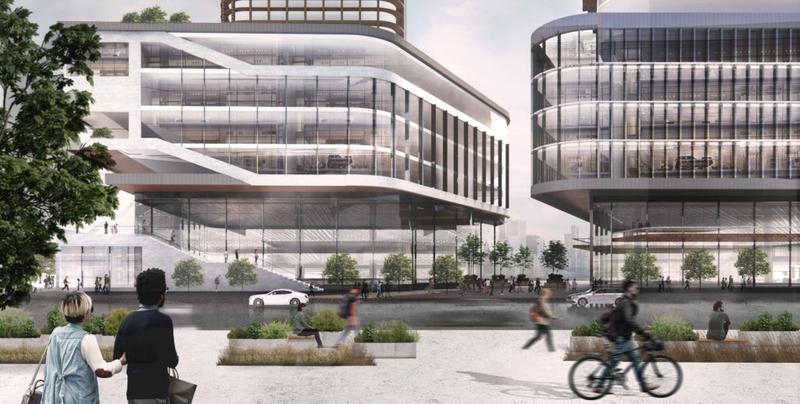 A rendering of the potential buildings. UBC Properties Trust

UBC has purchased a $70 million tract of land in Surrey, with an eye towards “the development of the university’s regional presence” in accordance with its 2018 strategic plan.

Following another year of tuition increases and amid the ongoing COVID-19 pandemic, the purchase raised eyebrows among some in the student community.

Aaron Koenders, a third-year student of global health in the faculty of land and food systems, voiced his concerns in an interview with The Ubyssey.

“I feel like there are definitely more pressing issues on the main campus that are being overlooked for creating this increased presence,” he said.

Koenders noted that the money may have been sourced from international students such as himself, many of whom still had to pay “the same amount of tuition even if they were to study online in their home country.”

When asked for comment on the funding of the purchase, UBC President Santa Ono wrote in a statement that “UBC Properties Trust purchased the land using its external financing capacity after approximately one year of planning and negotiation for the purchase."

Ono also stated that “regional presence” referred to the university’s goal to provide “world-class post-secondary education in the Fraser region,” as many students live out of easy reach of UBC’s existing campuses.

AMS President Cole Evans wrote in a statement to The Ubyssey that the AMS welcomed the Surrey land acquisition.

While the AMS was not aware of the purchase before UBC’s announcement, Evans said, it “had known for a while that UBC has been looking at expanding its presence in the Surrey area.”

As to the ultimate purpose of the land acquisition, statements by UBC have focused on the expansion of “regional presence,” while outlets such as The Globe and Mail and Daily Hive have reported that the land will be developed into a new campus.

When speaking to The Globe, Ono said that the campus should be able to host some classes, while acting as an economic booster to the city.

Koenders, on the other hand, feels that UBC should be addressing existing issues at the Vancouver campus, rather than investing $70 million in a different city. He said students should be consulted on high-profile purchases.

“For projects of this size … taking into account the student body’s beliefs would be of great value to UBC and the administrative offices as a whole,” Koenders said.

While there are still details to come regarding the development of the land, UBC said that it is in conversation with stakeholders in Surrey and the Fraser Valley, as well as Indigenous leaders and communities.