A March 2019 provincial report said post-secondary institutions may be a pathway to bring in “dirty” money from various countries to Canada. Lua Presidio

UBC changed its cash acceptance policies in late 2019 amid what a freedom of information request shows were money laundering concerns stemming from a letter from the BC government.

Through a freedom of information (FOI) request, The Ubyssey obtained UBC’s communications in response to the money laundering concerns laid out by the BC government. While UBC couldn’t identify any specific sources of money laundering, UBC’s treasurer called cash deposits through HSBC “a grey area.”

According to the report, lawyer and former RCMP Deputy Commissioner Peter M. German wrote for the BC government in March 2019, post-secondary institutions may be a pathway to bring in “dirty” money from various countries to Canada.

The report states that “some students bring only cash to pay for their tuition and expenses, and sometimes attempt to pay for multiple semesters in advance.” Later, students could withdraw from the institution and receive an institutional cheque in reimbursement of their fees.

Melanie Mark, advanced education, skills and training minister, sent a letter in May 2019 to all public post-secondary institutions asking them to develop or review their financial policies and share findings with the ministry.

UBC VP Finance and Operations Peter Smailes responded to Mark’s letter on June 28, 2019, saying that “it would be very difficult for the situations cited in the Dirty Money Report Part 2 [by Peter M. German] to be replicated at UBC.” 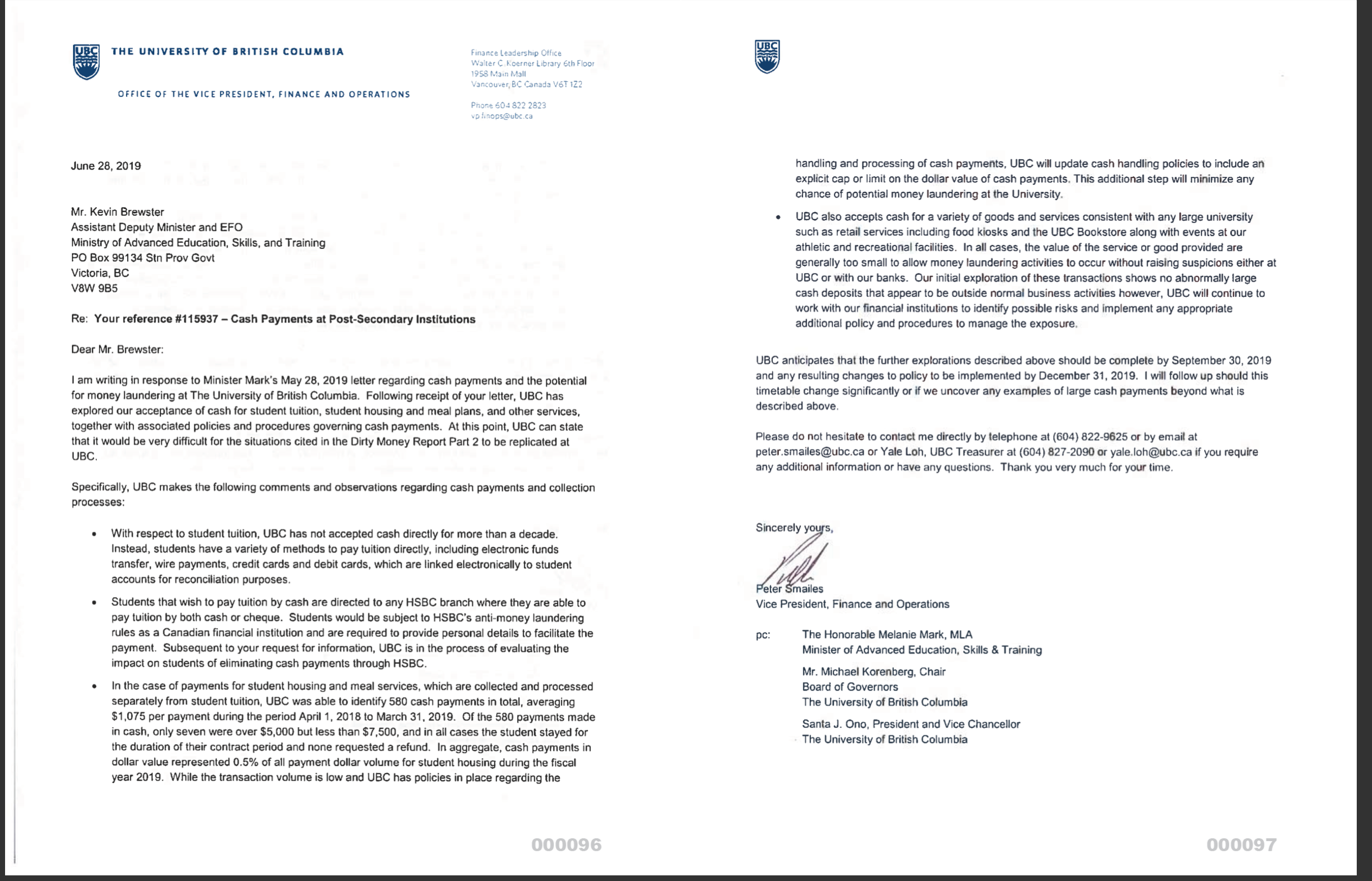 In a statement to The Ubyssey dated September 16, 2020, university spokesperson Kurt Heinrich confirmed that UBC stopped accepting payments in cash via HSBC in fall 2019.

“While HSBC has procedures in place to protect against money laundering, the decision was made in order to provide an additional mechanism to reduce the potential risk of money laundering,” Heinrich said.

“No UBC faculty or staff member may receive or process on behalf of UBC any single cash payment in excess of CDN$5,000 from any individual, company, or entity,” amended policy FM3 reads.

The risk of cash deposits

Banks need to report cash deposits over $10,000 to the Financial Transactions and Reports Analysis Centre of Canada (FINTRAC). But deposits made on campus at public post-secondary institutions do not have to be reported, as they’re seen as a legitimate source used for paying tuition fees.

However, German’s report noted that some international students may pay tuition and other expenses in illegitimate cash, overpay into their student account and then seek refunds by cheque.

“On a recent occasion, one college was faced with a student who was required to pay a charge of $150. The student attended with $9,000 in cash in a duffel bag and asked to deposit that amount minus the $150 owing,” the report reads.

The excess amount, in this case $8,850, is refunded to the bank account of the depositor. According to the report, this “refund” appears to be clean money on the bank statement as it comes from an educational institution.

“In effect, the institution was being asked to act as a bank,” reads the report.

In a July 2019 statement to The Ubyssey, Heinrich said that UBC hasn’t directly accepted cash for tuition fees for ten years. However, he clarified that students could pay their tuition fees at that time in cash via HSBC.

“While students may pay tuition in cash or by cheque via HSBC, they must provide ID and a UBC student number,” he said.

“We do apply high standards of anti-money laundering and controls across all our activities,” Wilks said in a 2019 interview.

She said all normal banking procedures such as establishing customer identification apply to cash deposits for UBC students.

However, according to FOI records, UBC Treasurer Yale Loh said in a June 25, 2019 email to Associate Vice-President Government Relations Adriaan de Jager that “[UBC’s] practice is to return any payments made through HSBC (either by cash or cheque) by cheque” — something Loh and VP Finance and Operations Peter Smailes were “supportive of eliminating.”

“HSBC is a little uncomfortable since the students using the service might not be HSBC customers and HSBC technically is supposed to ‘know’ all the people using their services,” Loh wrote in a May 2019 email to Enrolment Services and Media Relations. 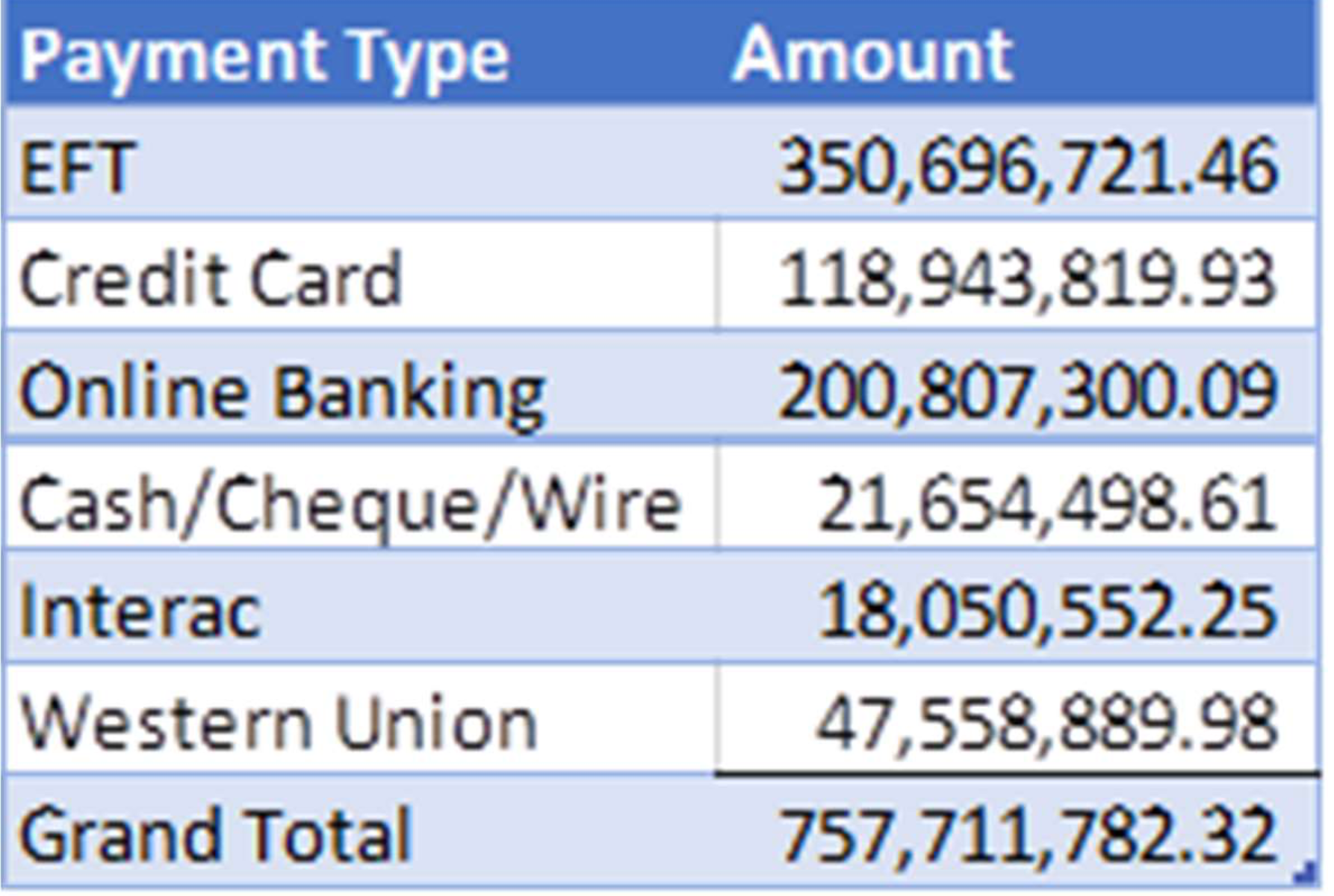 The modes of payments students used to pay their tuition fees in 2019/20. Maneevak Bajaj, Source: FOI

FOI records show that the university received $21.7 million in tuition payments by cash, cheque or wire transfer in 2019/20 — just under three per cent of all payments received. UBC didn’t provide data showing the number of cash deposits alone. 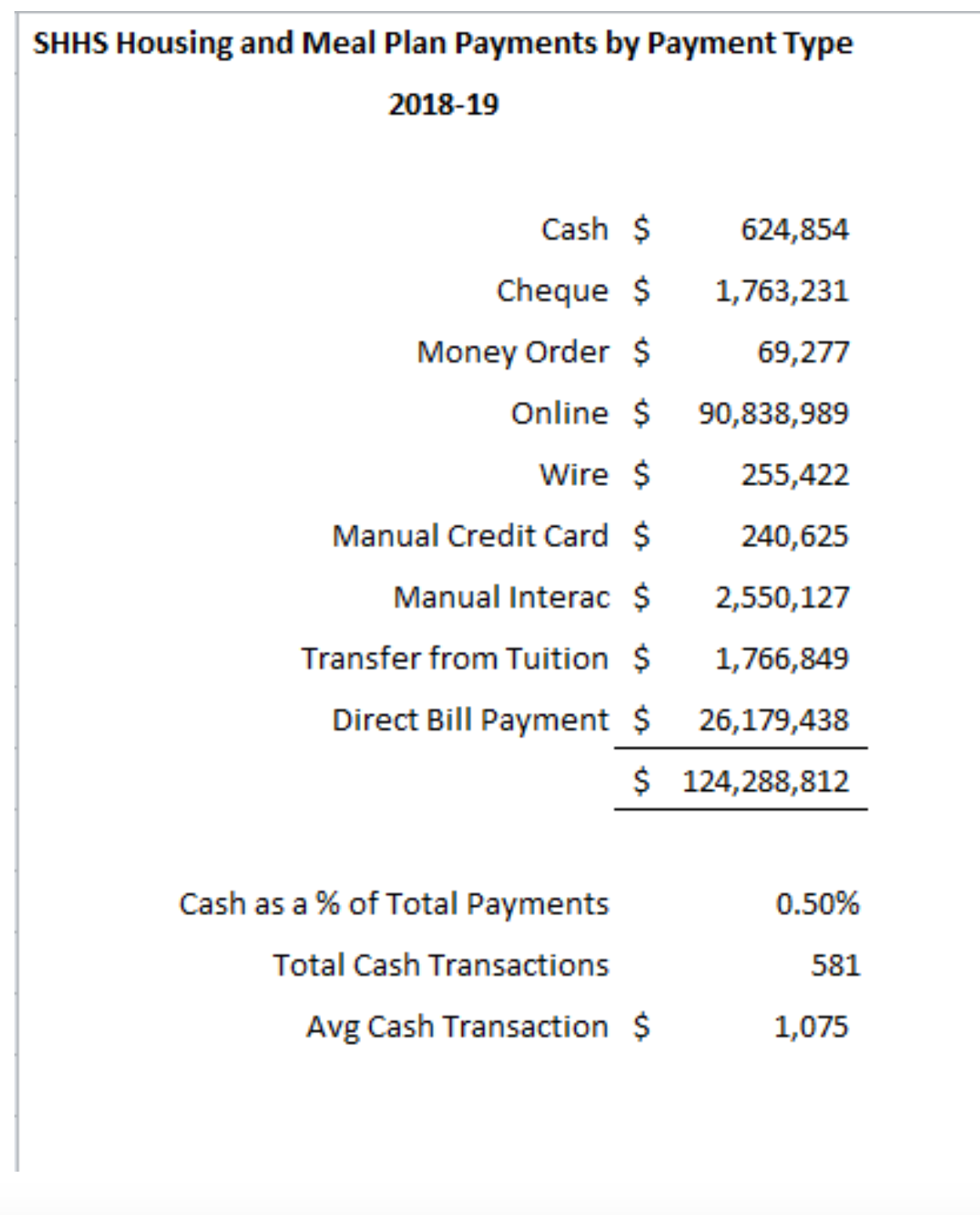 However, according to the UBC Extended Learning website, UBC Continuing Education still accepts cash payments directly. An email sent by Loh in November 2019 mentions that “Continuing education payments were not more than $5,000 in the sample we looked at.” The Ubyssey couldn’t find any other correspondence about it after the stated date.

Heinrich said the HSBC changes will have little impact on students.

“Given the very small number of cash payments made to UBC via HSBC prior to the policy change, we do not expect this change to adversely affect our students,” Heinrich said.