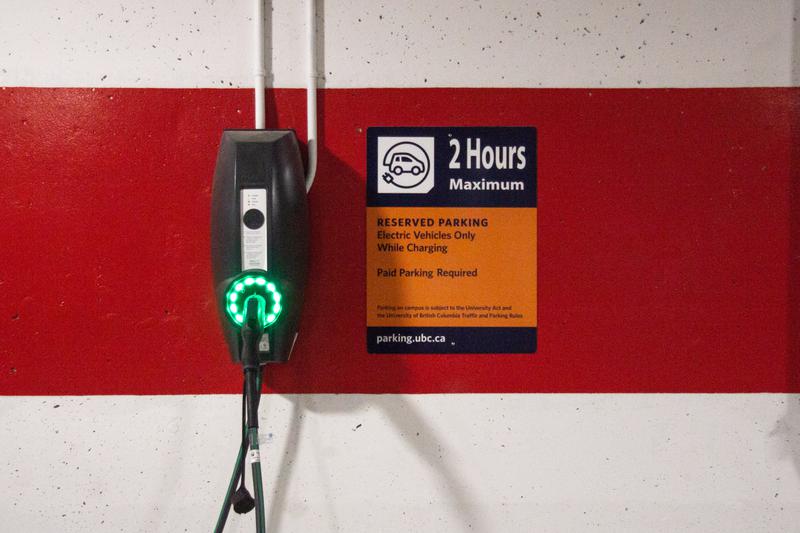 UBC Parking says this move will make EV charging more accessible on campus. Despite a mixed reaction from students over the high cost of parking, many cities in the region already have similar fees in place.

“This action is not unusual and brings UBC in line with cities across Metro Vancouver who charge such fees,” said Brian Jones, director of parking & access control services, in a statement to The Ubyssey.

EV charging fees are far from a new concept.

Vancouver has levied fees at city-owned EV charging stations since 2017 in addition to parking fees already in place. Across the Lower Mainland, North Vancouver, Coquitlam and Burnaby also collect fees and Richmond will start charging this March. A notable exception is Surrey, where municipal charging stations are free.

The UBC Parking website lists seven parking locations on campus with EV stations. Short-term charging is available by the Alumni Centre. According to the Honk parking payment app, daytime parking at North, West, Rose Garden, Health Sciences and Thunderbird Parkades costs $3.50 per hour for all vehicles. University Boulevard Lot will run slightly more — $4 per hour — with an additional $2 per hour to park at an EV station.

Jones says UBC’s EV charging fee structure is still under development but anticipates that the fee “will fall well below that in neighbouring cities.”

Charging revenues will help recoup electricity costs for operation, as well as installation fees, which Jones says were over $700,000.

Another motivator is encouraging people to charge at home, leaving campus spots open for people who live in complexes or other places where they can’t charge.

But a key goal is to encourage higher turnover at EV stations. Most mornings, at least 85 per cent of EV stations are occupied, Jones explained, and many EVs are parked longer than it takes for them to charge — about 2.5 hours. But instating a four-hour cap after receiving “complaints” isn’t enough.

“We anticipate this fee structure will continue to encourage EV adoption while making it clear that charging at home is the best place to recharge your EV,” he said.

Some EV drivers learned about the proposed fees through signs posted in campus parkades. A post to the UBC Confessions Facebook page expressed frustration about the planned fees, drawing backlash from commenters over the poster’s failure to take transit or acknowledge possible negative impacts of EVs.

“Im already [sic] paying 1200 dollars for a parking pass for 8 months and now you want to charge me extra for charging my car?” reads the post. “Seriously?? This is ridiculous and unfair.”

Second-year kinesiology student Ethan Ma only occasionally drives to school, but he said he would drive less under the fees.

“My car — for example, a Nissan Leaf — doesn’t have the same amount of mileage as other cars, like maybe a Tesla or a Chevrolet Volt,” he said.

“Sometimes, we need that charging station to get back home.”