Letter: AMS Council is at risk of representing faculties unequally 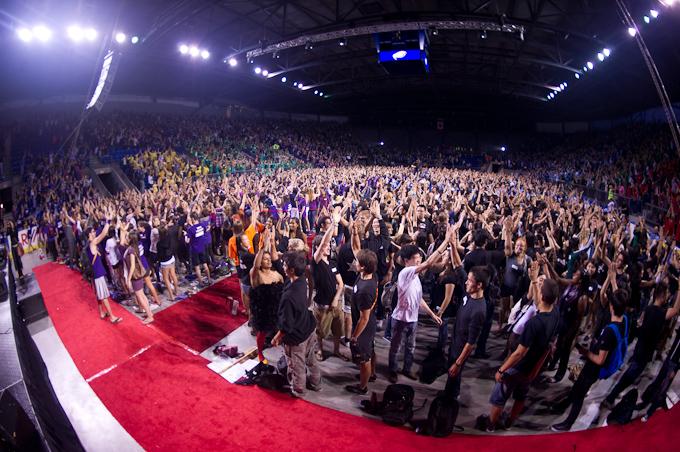 Student are separated by their faculty at the Imagine Day pep rally. Geoff Lister

Every year, a number of referenda questions run alongside the AMS Elections. Quite often there are bylaw amendments included in these referenda. These are changes to how the AMS is governed and rules imposed by the membership on the AMS. Unlike code or policies, the AMS leadership cannot change bylaws on their own.

This year, there are a lot of changes packaged together within a single referendum proposed by the AMS leadership. Buried in there is a change designed to reduce the size of Council by limiting the representation of larger faculties like science and engineering. On the surface, this might seem like common sense to increase Council efficiency. But beneath the supposed positivity, it looks more like an action that will make your AMS Council clique-ier and more unrepresentative than ever.

Let me start with the positive — Council is by most accounts too large. Lots of councilors are uninterested and removed, disengaged from the organization they nominally govern. A smaller council would promote more involvement and hopefully lead to an increased sense of responsibility from councilors. The idea of shrinking Council has potential, but I take issue with how the AMS intends to do so.

First, the current proposal would effectively halve the representation of larger faculties. Let’s take a quick peek at the numbers — a faculty like arts, which represents over 12,000 students (or about a quarter of UBC students), would be reduced from nine seats to five. In a council of around 35 to 40 members, that’s a big drop.

Similarly, science, engineering and the Graduate Student Society would all lose significant representation, shrinking their total share of AMS Council from 26 to about 17. Overall, these councilors would still represent over 60 per cent of students, but would hold under 50 per cent of Council seats. Meanwhile, small constituencies like the School of Architecture and Landscape Architecture (SALA) with only 60 students would keep their spot.

Council is supposed to be a representative body. For all its weaknesses, it is meant to represent the voices of students. Reducing Council by shrinking the representation of the larger faculties means that small schools will have more control over the AMS. It also reduces the chance that outsiders — people who are not already involved in student politics — will be able to win elections.

The AUS representative positions currently afford a good chance to students who are not intimately involved in the AUS to win a spot on Council. Shrinking the number of seats available decreases the ability of non-hacks to win an election. Lots of councilors who fill the sixth or seventh seat from arts represent groups that might otherwise be under represented on Council.

But the proposal truly shows its ugly head in a single line that would limit the ability of new programs to gain representation on Council. Many small schools are represented on Council because to be entitled to representation, your program must grant a degree and UBC is home to literally dozens of faculties and schools that grant degrees, including many that you’ve never heard of.

The proposed change would require a school have at least one per cent of UBC’s total enrollment or be approved by Council to gain representation. As an elected student representative and member of the UBC community, I find it truly abhorrent that we would place the power of choosing which communities deserve representation within the hands of those already in power.

The problem is that many current schools represented on Council would not be eligible for Council representation under this change. But since they already exist, they get grandfathered in — another arbitrary, discriminatory practice to placate the concerns of schools that already enjoy the privilege of representation while shutting out future programs. This change will structurally protect the current composition of Council at the expense of future changes to demographics.

This is little more than a mechanism that will keep the same people in power despite changes in the school that they are supposed to represent. For example, if a new program pops into existence and has 500 students, it would need Council’s approval. Meanwhile, an already represented smaller school — like SALA, which will only ever have 60 students — enjoys the privilege of keeping its seat.

AMS Council needs change. It’s obvious that Council is dysfunctional and that the executive has lost their respect for its necessary and important role in the governance of one of the largest and most influential student organizations in Canada. This has caused repeated inefficiencies, extra work and often real problems for the organization.

But fixing Council needs to be more deliberate, more representative and less arbitrary. We don’t need a more exclusive AMS — if anything, we need one that strives to better connect and serve constituents. As a concerned student and member of the AMS, it is my sincere hope that we can work toward creating an AMS Council that truly represents students and not one designed to keep the hacks in place.

Mackenzie Lockhart is a masters of political science student and a GSS representative on the AMS Council. Their views represent their own.