Letter: Neither side wins with these abortion protests 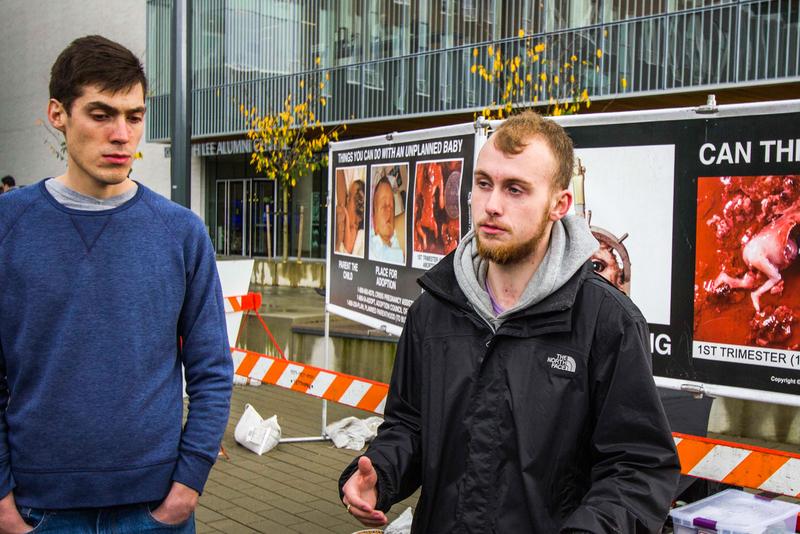 The recent protest around The Nest this week has enacted triggers, anger and disgust for many. This has been caused by the anti-abortion protests and the graphic imagery presented by the UBC Lifeline group. The point of this letter is not about my personal views on the matter of abortion or to wave a moral finger at either side of the debate. The purpose of this letter today is to provide a slight critique of both sides in how communication is done about this topic.

For full disclosure, I tend to lean towards a pro-life stance, but I can understand why abortion is asked for and why people go through it.

With that out of the way, picture a scale where one side is radically against abortion in almost all circumstances — for example, the Catholic Church. The other end are those who believe that during any time the fetus is in the womb, an abortion can be had — this is a position expressed by philosopher Peter Singer. Most people are somewhere in the middle of those two positions and both radical positions face huge problems and setbacks.

This is particularly evident for the radical pro-life position involving cases like pregnancy by rape. On the flip side, the radical pro-choice position faces problems when justifying cases of selective abortions such as aborting a fetus if the child will be ability-challenged or due to reasons around gender.

To critique the pro-life protesters and how they present their message through vulgar and disgusting images of aborted fetuses — as someone who does lean towards the pro-life stance, even I was disgusted by the images and almost embarrassed by the fact that my sympathies do align with their cause. They protested in a manner that caused discourse of outrage rather than a discourse about the issues. The pro-life presenters give off the impression that they are waving a moral finger at people that says, “Look at what you do when you support this act.” That really does not win people towards your side. This is where the counter-protest comes into play.

The counter-protesters seemed like less disgusting people, but there is still a hint of moral finger waving done on their side also. The pro-choice protesters would throw insults and nasty comments toward the pro-life protest. At times, they even threw anti-religious comments such as “keep your rosaries off my ovaries,” which is unneeded and only insults the beliefs of some pro-life supporters who support a pro-life stance.

In the end, it seemed to turn into a straight-out yelling match between the two protest groups without any discourse on the actual matter. The thing is that both sides could have decent points and arguments to make rather than escalate into an emotional outrage. An example of this is that usually pro-choice sides more towards women than pro-life does and that is the case for most Western countries.

But the pro-life side can make the argument that abortion can be used as a tool towards harming women. An example of this would be in countries like China and India, where abortions are available upon request as in Canada, but the phenomenon of selective abortions has caused huge problems for the demographics of those countries. Selective abortions are not just a problem in Asian countries, as Eastern European states have used abortion as a means to not have girls born into their families as well.

These points, however, do not even get talked about because these protests just turn into shouting matches. The pro-life side wants to disgust people and the pro-choice side wants to insult and put down the other side. In short, my interpretation on these matters is that discourse like this is useless. It does not get people involved in the topic that the protesters on both sides are trying to bring up, but can actually get people to avoid the topic altogether.