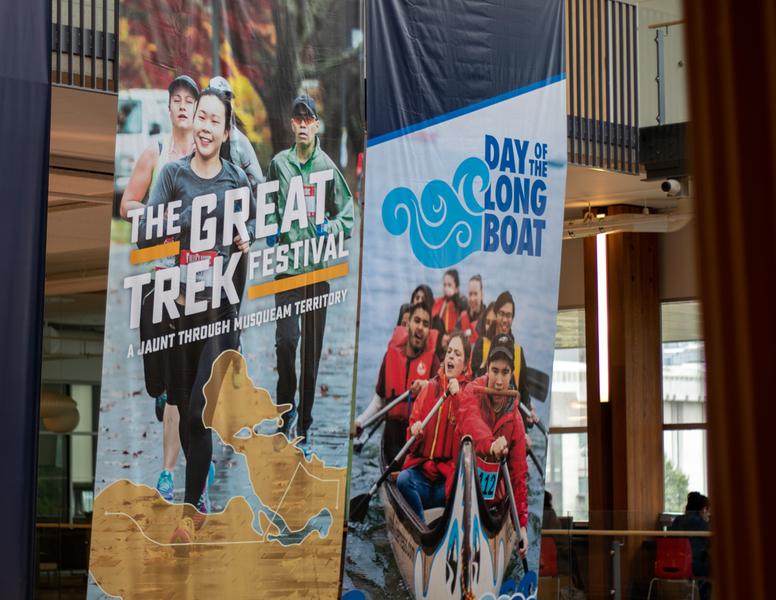 I’m bothered by how UBC is using its students’ history of standing up for what they believe is right as a marketing tool. Zubair Hirji

I spend almost all of my waking hours in the Nest. If a fly breaks wind on the third floor, I can sense it. So obviously, I noticed when a two-storey-tall poster was unveiled last week promoting UBC’s Great Trek Festival. The poster features smiling students on a run, shows a map of Vancouver and UBC and ends with the strangely worded tagline: “A jaunt through Musqueam territory.” This poster and the festival misrepresent UBC history, and that infuriates me.

This is the first year of Great Trek Festival. The festival is part of Fall Classic, a series of races and marathons held annually at UBC. The ‘Great Trek’ part of the festival will feature a relay race around campus and is advertised to have “a party at University Plaza and traditional Musqueam performances.” According to the relay website, the race is “Following in the tradition of the Arts '20 Relay, a historical UBC event which pays homage to the founding of the UBC Point Grey campus," and the festival itself is named after a critical event in UBC student history (except neither the relay or the race take the route of the Arts 20 Relay or The Great Trek).

So, why am I complaining about students getting exercise? I’m not. I’m bothered by how UBC is using its students’ history of standing up for what they believed was right as a marketing tool.

The event website gives a brief explanation to the Great Trek and its history but to understand my qualm, let’s delve a little bit more into some early campus history. When it was founded, UBC used to be where Vancouver General Hospital currently sits, in the Fairview neighbourhood of Vancouver. That campus was built as a temporary space, as our current Point Grey location on stolen Musqueam land was chosen in 1910. With the outbreak of WWI, the building of the Point Grey campus was put off by the provincial government and courses began in the temporary buildings in Fairview. As the war ended, enrolment went up by 211 per cent leaving the Fairview campus over-crowded. To accommodate all those students, courses had to be held in church basements or in tents.

In 1920, students of the arts faculty challenged students of other faculties to a relay race from the undeveloped site of the university to the Fairview campus. The relay became a symbol for the inaction of the provincial government and represented the frustration of the students. The students continued to pass the baton of anger at the lack of work done on building the new Point Grey campus.

The culmination of this frustration was angered action in the summer of 1922. The president of the AMS organized a campaign for students to return to their hometowns collecting signatures petitioning the provincial government to start work on the new campus. In that October, the AMS held Varsity Week, a week to raise public awareness and collect more signatures. The week ended with The Great Trek. To make a statement to the provincial government and administration, students marched from downtown Vancouver to Point Grey. The students marched with banners, floats and a marching band calling for immediate action on building the campus. The march ended with students performing a sit-in on the shell of the science building – now the chemistry building. After the impressive effort, the provincial government gave in and completed construction of the Point Grey campus in 1925. 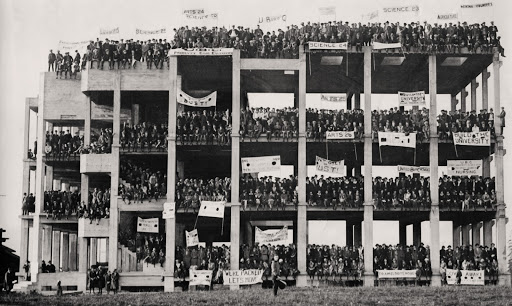 The Great Trek loses meaning when stripped of its radical roots. Commandeering an act of student resistance and using it as a public history PR move takes away the importance of the students’ actions. In commercializing our history, we keep what sounds good to sell a run and lose what was substantial about the history in the first place.

All that history being said, The Great Trek may need re-examining in our consciousness.

Though it is a key part of our history, it is important to reflect on The Great Trek through a critical lens — how can we reconcile this with the fact that the land the students marched for was unjustly stolen? With the planned events of the festival, like the Musqueam performances, it seems as though UBC is putting some amount of effort into re-thinking the role of The Great Trek in our scholastic myth, even if the slogan “A jaunt through Musqueam territory” may miss the mark in terms of actually showing a partnership with the First Nation.

This isn’t to say that UBC should never evoke the Great Trek. To truly pay homage, the festival should focus more on its activist roots, with the Arts ’20 Relay taking the route of the original one and spaces for students to air their grievances to the provincial government and university administration (The university giving us space to complain? Ha!). While the university seems to be moving in a better direction in terms of doing at least something to acknowledge Musqueam title and trying to add some campus history to their traditions, the poster and website shows that they are prioritizing selling a run over telling the actual history.

Thomas O'Donnell is a fifth year political science and Canadian studies student and the culture editor at The Ubyssey.