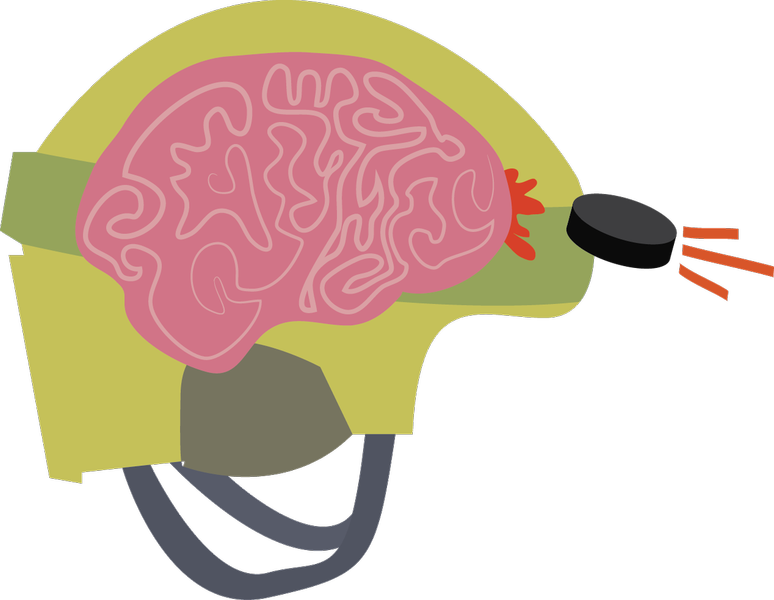 By the standards outlined in conventional concussion tests, the players were ready to return to the ice. Ella Chan

If you’ve ever played a contact sport, it’s likely that you’ve known someone who has experienced a concussion. Responsible for over 4,000 hospitalizations between 2001 and 2010 in British Columbia alone, concussions are common yet serious head injuries that occur among people of all ages and backgrounds. As concussion symptoms vary widely in severity, so too does the length of an individual’s recovery period.

Myelin fibres play an important role within our nervous systems, functioning as insulation for our nerve cells and facilitating the conductivity of electrical signals within our brain. A decompaction, or “loosening” of these fibres “reduces the conductivity of the axons by about half,” said Dr. Alexander Weber, a postdoctoral research fellow in the neurology division of the department of pediatrics at UBC.

When conducted separately, different types of MRI scans are limited in their scope of measurement, leaving previous researchers unaware as to what exactly was occurring with the myelin. In tandem with each other, however, they can be used to corroborate individual findings, and work to fill in a bigger picture. This method of research is known as a multi-modal study.

The initial scans, published in 2016 by Dr. Alex Rauscher, a physicist and associate professor in the UBC department of pediatrics, were conducted on 45 ice hockey players before the season began. If a player was concussed during the season, they received additional scans at three time stamps: three days, two weeks, and two months post-concussion. At two weeks, the eleven players who sustained concussions during the study all reported feeling fine. By the standards outlined in conventional concussion tests, they were ready to return to the ice.

But despite these reports, Weber said there is “objective evidence that [their brains are] still vulnerable.” Current animal studies suggest that loosened myelin can completely deteriorate with further concussive hits, resulting in far more debilitating cognitive deficits. Conditions that break down myelin sheaths are known as demyelinating diseases, the most well known being multiple sclerosis. However, the extent to which myelin loosening contributes to a concussed patient’s cognitive behavioural abnormalities remain unclear.

Conventional MRIs that are available in hospitals are unable to detect the nuanced differences in myelin density observed in the study, and further research needs to be done. Although these advanced MRI techniques are a recent development, Weber believes in their promise as a new tool in neural imaging.

“I feel like the future for MRIs is really [a] quantitative MRI,” Weber declared.