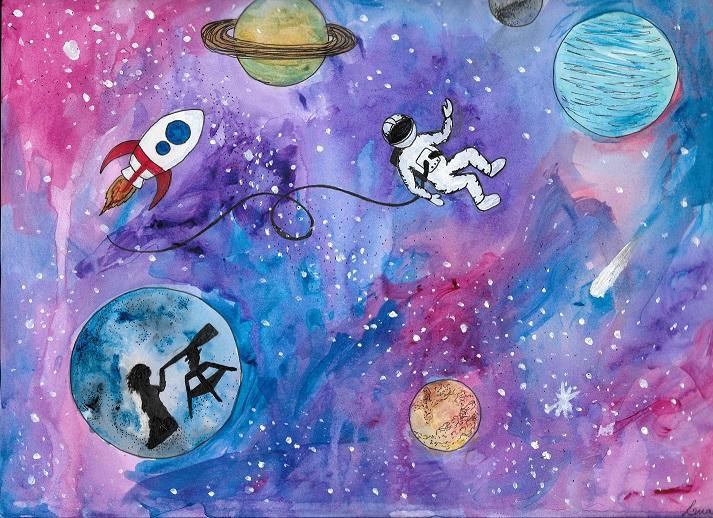 Main sequence stars, the most numerous type of stars, exist thanks to a process that takes place in their interiors known as nuclear fusion, in which hydrogen atoms fuse together to create helium atoms. The energy produced through this process not only results in a star’s luminosity, which we perceive as lights in the night sky, but also creates a pressure that prevents stars from collapsing under their own weight.

Unfortunately, stars only have a limited supply of hydrogen, which serves as their fuel and determines their lifespans. Although bigger stars have larger hydrogen reserves than smaller stars, they usually die faster because they convert their hydrogen at a much faster rate.

Once a star’s hydrogen supply is depleted, it no longer has the energy to support itself or counter the gravitational force that encourages it to collapse. The core of the star then begins to collapse on itself, and becomes much hotter.

Eventually, larger and cooler stars called red giants are formed when the star’s core pushes the outer layers of the star until the star expands and cools. Unable to sustain itself, the star’s nuclear core becomes increasingly unstable until the star ends up pulsating and pushing away its outer layers, resulting in a cloud of gas and dust. The final fate of the star, however, depends on the size of its core.

For smaller, typical stars such as our sun, the star will continue to eject its outer layers until its stellar core is exposed. Called white dwarfs, these dead stellar cores exist without collapsing due to the pressure of their quickly moving electrons. They lack a source of energy production and are extremely dim as a result, eventually fading away to nothing as they cool down.

If white dwarfs are in close proximity to a neighbouring star, its gravity can attract matter from the outer layers of that nearby star into its surface layer. Most of this matter is hydrogen, and when a sufficient amount of hydrogen has built up on its surface, a nuclear fusion explosion — called a nova — occurs.

Very large main sequence stars can quite literally go out with a bang in a phenomenon called a supernova. Unlike a nova, where only the star’s surface explodes, a supernova occurs when a stellar core collapses and then explodes.

If a supernova’s collapsing stellar core is a certain size, the collapse will continue until tiny particles called electrons and protons merge to create neutrons. The result is an extremely dense neutron star, which emits powerful beams of radiation from its magnetic field.

If a supernova’s stellar core is big enough, it will collapse completely to form an infamous black hole. With infinite density, black holes exert enough gravity that everything in its surrounding, even light, is swallowed by it.

In time, the leftover remnants of supernovae and novae mix with the surrounding interstellar gas and dust. The heavy elements and chemicals deposited by star deaths are then recycled to be used for the next generation of stars.

So if a main sequence star starts its dying process around you, imploding in on itself and getting impossibly hotter, just #unfollowhim and get outta there.