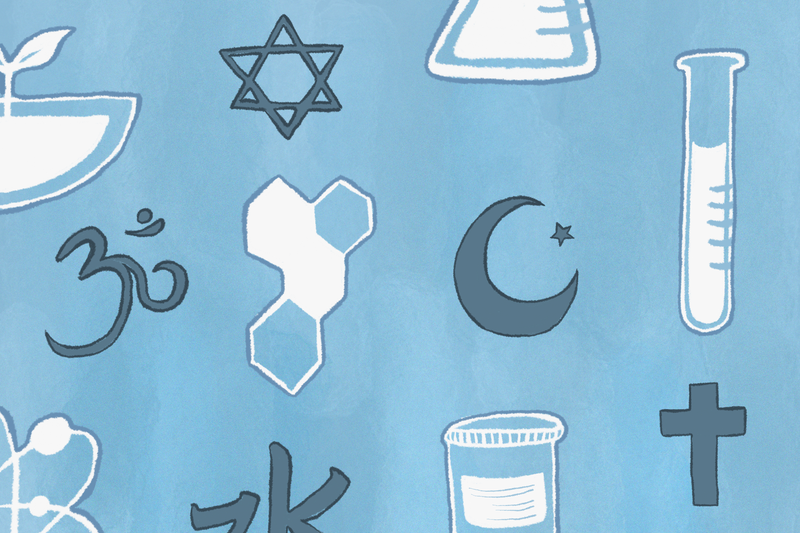 A new massive open online course from UBC on the science of religion is combining science and the humanities to discover why some of us believe.

The course is hosted by edX, an open-source online course provider, and is one of 38 currently offered by UBC on the platform. With over 1000 courses offered in partnership with over 50 universities, edX is a well-known resource for students. Since 2015, UBC has provided courses on coding, Indigenous education and Chinese thought, all for free.

Teaching the science of religion course are Dr. Edward Slingerland, a professor in UBC’s Asian studies department and Dr. Azim Shariff, associate professor of psychology at the University of California, Irvine.

Funded in part by a grant from Canada’s Social Sciences and Humanities Research Council, the course approaches the study of religion from a cognitive science perspective.

CSR takes a scientific approach to explain why and how people have religious beliefs. This means taking a look at the cognitive, social and cultural mechanisms involved in religion.

“If you want to boil it down into one big question, it’s, ‘why religion?’” said Slingerland. “History of religion courses just assume that religion is one of the things people do. CSR takes it a step back and says, well, ‘why do people have religion?’”

Religion is very puzzling from a naturalistic perspective, said Slingerland. Sacrificing material goods to build temples or giving offerings to appease a supernatural deity can be very costly. If religion can cause people to behave against their best interests, what is its purpose?

There are a couple of different theories of why people believe.

The social control hypothesis posits that religion has historically been controlled by social elites who trick the populace into contributing resources for their own gain. Cognitive scientist Dr. Daniel Dennett’s evil meme hypothesis (no, not the “Dr. Evil” memes) envisions religion as a virus of the mind, a cultural idea that attaches itself to its host and causes them to spread it to others.

Yet many find much to be gained from their faith. Religion may aid in anxiety reduction and give us a sense of control. The meaning-making hypothesis sees religion as a way for us to satisfy our desire to see meaning in the world around us.

CSR hypothesizes a social benefit to religion. Grand temples, for example, could serve a symbolic social purpose and create solidarity among groups that could help them outcompete others, explained Slingerland.

The driving hypothesis behind the grant that originally funded the new edX course was the hypothesis that religious behaviours are a “byproduct of cognitive tendencies that originally evolved for other reasons,” said Slingerland. “Basically there is, in a way, a little bit of truth to all of these [hypotheses].”

Theory of mind, a concept used by cognitive scientists, offers an interesting explanation for religious belief.

If a hurricane destroys a house, we immediately want to know why it happened even if there’s not an explanation, said Slingerland. “The answers to ‘why’ questions require agents,” said Slingerland. We tend to see other people as individual agents, a consequence of our innate mind-body dualism.

That’s why it’s so confusing to see or think of a dead person — it’s our natural inclination to wonder ‘what happened?’ Religious explanations arise as a byproduct of this kind of thinking.

People with “impaired theory of mind abilities,” like people on the autism spectrum, “tend to not believe in religion as much,” said Slingerland. On the other end, people with paranoid schizophrenia possess excess theory of mind that sometimes manifests in enhanced religious belief.

These are all “bits of evidence that religious belief is probably linked to theory of mind abilities,” he said.

We have some explanations for why people might harbour religious beliefs, but why do certain religions flourish above others? We could all be practicing Dianetics or worshipping a flying spaghetti monster, but a handful of the world’s largest religious groups make up the bulk of believers.

“It’s not an accident that certain types of religions spread, and it’s because they cobble together a successful combination of features,” said Slingerland. “Having the idea that God actually cares about us being good to one another is a very successful idea,” he said.

Supernatural monitoring (the belief that God(s) are watching us), costly practices like circumcision and ritual practices are other common features.

These are just some of the topics explored in the edX course. The benefit of having these discussions on the web moves the conversation from the academic sphere to the wider populace.

One problem that arises in CSR studies is a lack of knowledge about different disciplines. Scientists can have little knowledge of complicated cultural contexts, and humanities professors often lack the explanatory models necessary to tackle questions of ‘why,’ said Slingerland.

The decision to have the course taught by an Asian studies professor and a psychology professor was intentional, because integrating the humanities and science is a key goal of CSR.

Slingerland believes an open online course is a good way to “expand the pool” of people who can teach a course on CSR, as there are a limited number of experts at UBC — he cites psychology professor Dr. Ara Norenzayan as one such expert. While UBC has its department of classical, near Eastern and religious studies, plans are in the works for a new religious studies program.

“Having UBC be the host of this science of religion [course] is a way for UBC to signal to everyone that this is an area that we have strength in,” said Slingerland.