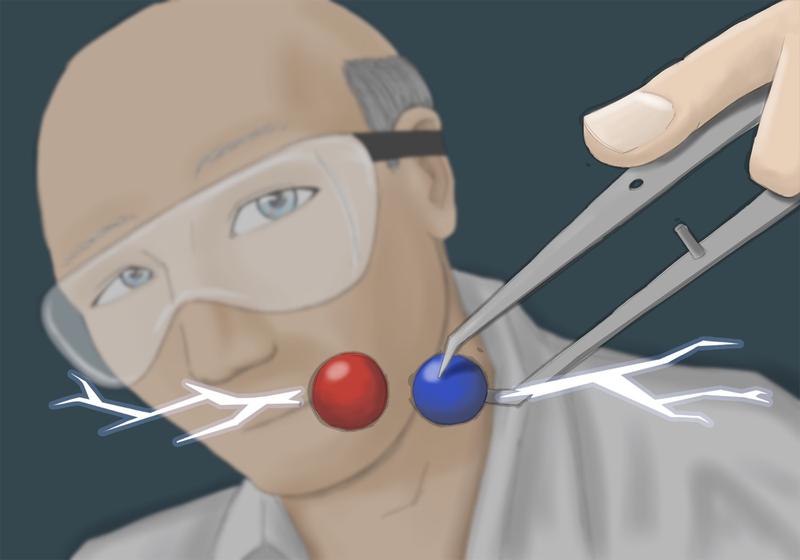 This is not how organic semiconductors are made. Illustration Julian Yu / The Ubyssey

Semiconductors are elements on the periodic table that conduct electricity better than nonmetals but not as well as metals. One of the most common semiconductors is silicon, which conducts electricity via exposure to light and is used in solar cells as well as other types of electrical components.

“What happens is that [electrons] have to diffuse to where two types of materials meet each other at an interface and then there’s charge transfer. Then you've got ... [a] current flowing,” said Cochrane.

Cochrane’s current research involves examining the specific molecular interactions that happen in the interfaces of organic semiconductors through scanning tunnelling microscopy — using a special microscope to image surfaces of tiny structures. She said that, since scientists currently have limited knowledge in this particular area, her goal is to determine the how interfaces can yield the most effective results.

“What I want to do is look at the actual molecules and place two molecules next to each other and see how the geometry affects the electronic structure,” said Cochrane.

Cochrane said that one advantage of organic semiconductors is that its manufacturing process is more cost-effective compared to traditional semiconductors like silicon.

“If you’re making a silicon cell, you need to have a very clean environment and high temperatures. The cost of making these — both in actual dollars and in energy — can be quite high,” said Cochrane.

With organic cells, production can be as simple as inkjet printing the material through refabricated newspaper printing presses. Organic semiconductors also offer the advantage of being lighter compared to silicon.

Experts don't want to replace silicon with semiconductors, explained Cochrane. Instead, research is looking into using organic semiconductors in places where silicon can't be used.

Organic semiconductors are presently available for commercial use. Some devices —including televisions and mobile phones – currently operate on organic cells.