Canada Sevens is back in Vancouver this weekend! 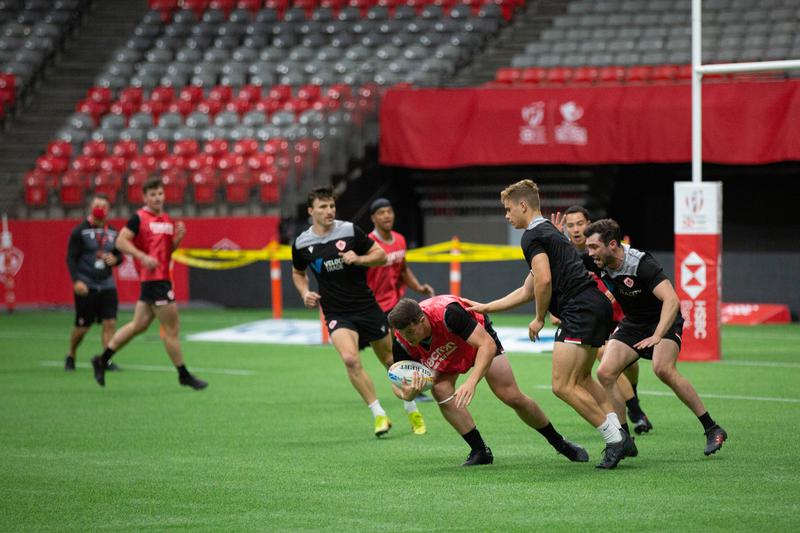 “It’s really a dream come true to be able to take the field at home with some long time friends and UBC players and represent Canada.” Sophie Galloway

It’s an exciting weekend for rugby fans in Vancouver as the 2021 World Rugby Sevens Series makes its first stop of the year. Teams from Canada, Great Britain, South Africa and New Zealand are all in action on this Saturday and Sunday at BC Place.

The 2020 edition of the event was unfortunately cancelled due to the COVID-19 pandemic, meaning that this is the first Sevens Series event in over a year. As well, there will only be two tournaments, in Vancouver and Edmonton, as opposed to the usual ten.

“It means everything to me - after 18 months without any games or rugby it feels amazing to get to restart the series in Vancouver at home in front of friends and family,” said Nicholas Allen, who is also a fifth-year T-Bird studying law at UBC.

“Because of COVID my last year at UBC was cut short and so I had largely felt like I wouldn’t have the opportunity to continue to pursue rugby before HP gave me a shot to come play against the Mens team before they left for Tokyo,” said Allen. “It’s really a dream come true to be able to take the field at home with some long time friends and UBC players and represent Canada.”

The Thunderbirds are well represented in Canada’s roster. Nicholas Allen, Jack Carson, Matthew Percillier, Elias Egras and Phil Berna have all either turned out for the blue and gold or are playing for the T-Birds this year.

“The coaching staff and players at UBC always compete at a really high level and push each other to make the most of these opportunities. Being in a program where tons of guys have gone on to play for Canada or Pro has helped me get to this moment for sure,” said Allen.

It’s also a young team that will be playing in Vancouver. Many of the veterans that appeared in the Tokyo 2020 Olympics have either retired or are sitting this event out. This means that for the roster playing, they’ll be having a chance to show that they belong on the international stage.

Jack Carson — one of the youngest players on the team — is also a T-Bird. Carson hopes to showcase what he can do and help the team with multiple wins.

“I hope to learn how to compete at this level and take that back to my club at UBC and try to help that club as much as I can after this,” said Carson.

The action kicks off Saturday at 9:44 a.m. with Ireland taking on Hong Kong, while Canada’s first game is at 11:15 a.m., where they take on Germany. The tournament will run through Sunday, with the final match happening at 5:28 p.m..

“I’m looking forward to the challenge presented to us of taking the field with a bunch of new, keen guys. We have some big shoes to fill but everyone is up to the challenge and excited to take the field in front of fans,” said Allen.