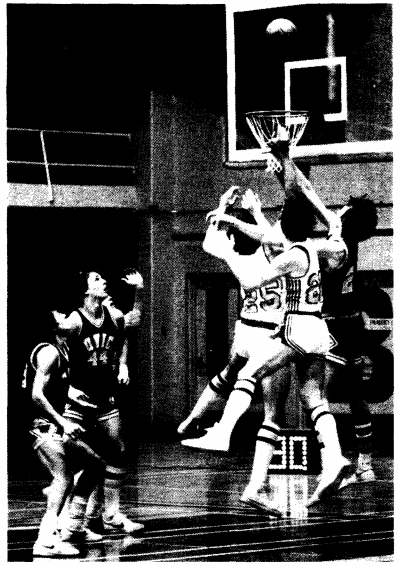 Pasquale led the vikes to victory in the next game of that 1981 series. File Arnold Hedstrom

Eli Pasquale, a legend in UVic basketball and a pain for T-Birds players throughout the early 1980s, passed away on November 4th after a battle with cancer. The Olympian helped grow the sport both on the island and throughout the country.

In the February 10, 1981 issue of The Ubyssey, the featured sports story was about the results from a set of games between the UBC and University of Victoria (UVic) Vikes men’s basketball teams the previous weekend.

The magnitude of the series went beyond the traditional rivalry, as the UVic men were the defending Canadian Interuniversity Athletic Union (CIAU, now U Sports) champions in basketball, and had beaten UBC in their previous matchup by 36 points.

But thanks to what sports writer Scott Macdonald called a “pathetic” shooting performance from UVic, UBC was to pull off the upset at War Memorial.

That loss would only be the second last time UVic would lose a conference game in the next three years, as they would go on to win six consecutive CIAU championships between 1979 and 1986.

One player who was responsible for five of those championships was guard Eli Pasquale who, it should be mentioned, did not have a “pathetic” performance that night as he led his team with 16 points.

To this day, the legacy of Eli Pasquale and those UVic teams from the 1980s is well known, which was why it was heartbreaking to learn about his passing on November 4.

As someone who grew up playing basketball in Victoria, I was fortunate enough to not only have played and worked for him, but to also have lived in the same neighbourhood.

As a coach, he was a terrific mentor to his players who were mostly teenagers or younger kids.

Eli created an environment where everyone felt included in a way that gave us a break from the social insecurity we faced at school.

My friends described him as someone who was always fair and cared about each and every player that he coached, adding that he was a role model and a “light” for basketball in Canada.

And while we knew that we were not going to play in the NBA, what Eli taught us on the basketball court could be applied to whatever we choose to do as adults.

I still remember working his camps in high school and watching the campers go silent once Eli began telling his story.

For those who don’t know his story, this is a brief summary: a boy becomes passionate about basketball around puberty and then, through a relentless devotion to the game, that same scrawny kid from Sudbury goes on to win five CIAU championships and a gold medal at the 1983 Summer Universiade, beating a United States team led by future hall of famers Charles Barkley and Karl Malone in the semi-final.

It was a story I’d heard countless times yet one that still resonated because of its message that through hard work and discipline, great things can happen to anyone.

One time during a practice, I remember Eli decided to defend us each, one-on-one, full court. Keep in mind that my teammates and I were spry teenagers and Eli had supposedly been ‘retired’ from basketball for years. Yet that still did not prevent him from stopping us from scoring by stealing the ball, or in my case, blocking my shot.

Another one is when I talked to coach this past summer. It was only a couple years after he and his wife had moved into a house one street over from where my parents lived, so I would usually see him when I was home on break. It was nearing the end of the summer, and I remember that we were both out for a walk and enjoying the nice weather. At that time, I was concerned about the upcoming semester, and rather saddened by the end of another relaxing summer, so it felt nice to hear someone ask how you are doing and wish you good luck at school in the fall. It was a small but meaningful interaction that showed he was someone who looked out for his players outside the arena.

After all, that is what the best coaches do.