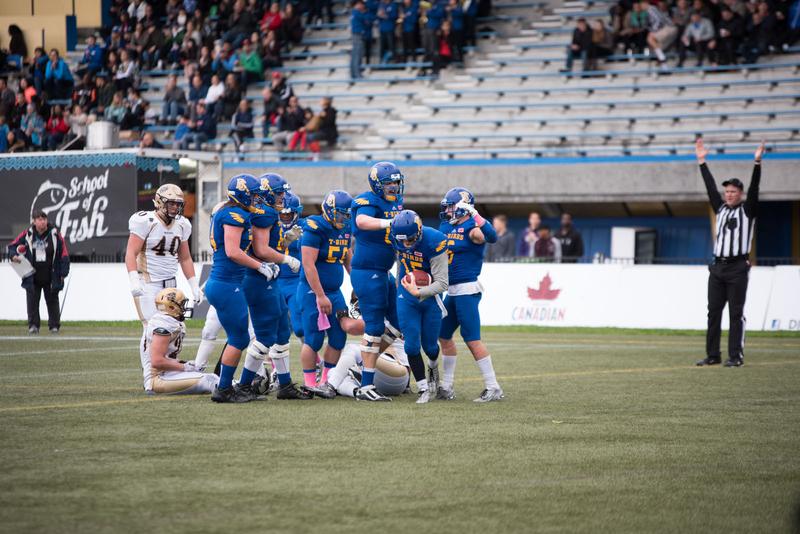 The 'Birds will have the home field advantage when they take on the Bisons on November 7.

After picking up a win on the road against the Saskatchewan Huskies last week, UBC football finished the regular season at home with a crucial 24-10 victory against the Manitoba Bisons.

“Not only did they take every rep during the week [and] during game, they made every rep at practice and they deserve so much credit,” said Blake Nill, UBC head coach.

The game witnessed noticeably strong defence on both sides of the ball from the very start. Both UBC and Manitoba recorded an interception and a fumble recovery during the first quarter.

UBC was first to get onto the scoreboard during first quarter on a 14-yard run by receiver Marcus Davis. Manitoba then responded with a 30-yard field goal early in the second to narrow the score to 7-3.

With continually strong defense by the Thunderbirds and the Bisons — which included an interception by UBC defensive back Stavros Katsantonis — neither team produced a point in the next 12 minutes. Near the end of the second, quarterback Michael O’Connor scored the T-Birds’ second touchdown on a four yard rush to make the score 14-3.

The first 10 minutes of the third quarter was again a stalemate until O’Connor made a 45-yard rush that set up kicker Quinn Van Gylswyck for a 12-yard field goal. UBC led 17-3 by the end of the third.

In the final quarter, both teams continued to show impressive plays on defence. Katsantonis got his second interception of the game and Manitoba’s Matt Hallock recorded a sack on O’Connor.

“The defence, I felt, played a really key role today in holding [the Bisons] in by 10 points, which is really impressive,” said Brandon Deschamps, T-Birds running back.

With three minutes remaining, the Bisons finally gained some ground by scoring a touchdown. Less than a minute later, Deschamps responded with a 50-yard run for the Thunderbirds. UBC won the game by a final score of 24-10 and Deschamps finished with 119 rushing yards— his second most of the season.

UBC and Manitoba both held a 5-2 record coming into the game. With the win against the Bisons, the T-Birds finished the season 6-2 and placed second in the Canada West Division. UBC also gets the home field advantage next week in their first playoff game against the third place Manitoba.

“To go six and two with this group of young men and this group of coaches is amazing ... I’m hoping that the country sees what this university is,” said Nill.

The Thunderbirds will face the Bisons at Thunderbird Stadium on November 7 in the Canada West Semifinals.