From the ’Birds to the ’Nucks: Hewitt enjoys his moment in the spotlight 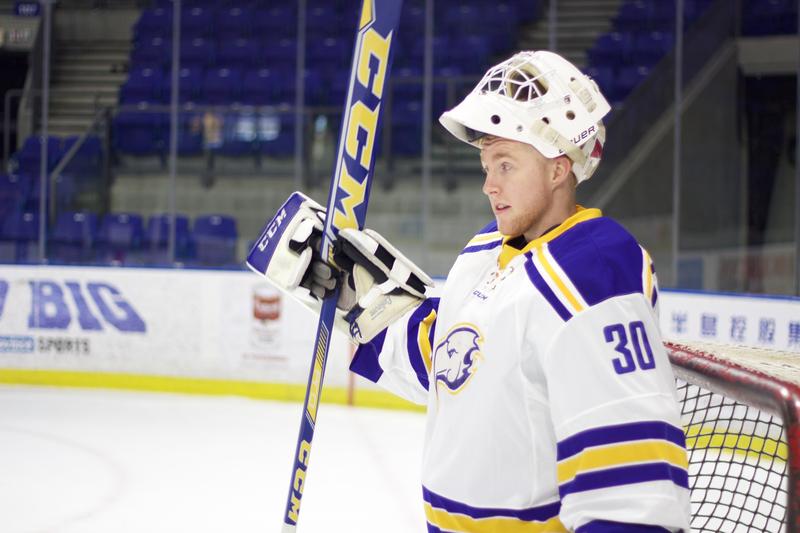 Matt Hewitt can now call himself a former Vancouver Canuck.

The fourth-year sociology major was signed to a one-day amateur contract with the professional club after it was announced early Tuesday that starting goaltender Ryan Miller was injured and had been ruled out of the Canucks lineup against the St. Louis Blues. With no time to fly third-string goalie Thatcher Demko to Vancouver, the Canucks’ best available option was to make Hewitt the emergency backup to Jacob Markstrom.

Like many young hockey players, making the NHL has been a lifelong dream for Hewitt and his journey is an inspiring one. As an undrafted prospect, the New Westminster native attended training camp with the Western Hockey League's (WHL) Regina Pats in 2007 as a 15-year-old, and again in 2008 when he was 16.

After getting cut from the team in his first two years, the Pats decided not to invite him back to camp the following year — but Hewitt did not let the setback wear him down. In 2010, he finally made the Pats roster as an 18-year-old and played 32 games in his rookie season as the backup goalie to Damien Ketlo. After Ketlo was dealt to the Lethbridge Hurricanes during the offseason, Hewitt took over as starter for the 2011/12 season and led the Pats to their first playoff appearance in four years.

Despite his success in Regina, Hewitt was never drafted by an NHL team. In 2013, after three seasons with the Pats, he decided to accept a WHL scholarship and attend UBC to pursue a sociology degree.

Hewitt is currently playing his fourth season with the Thunderbirds. Through his first three seasons, he has racked up 16 wins while splitting the goaltending duties with Steven Stanford and Eric Williams. At this point, getting the opportunity to play on a professional team was seemingly out of reach for Hewitt. But on that Tuesday, the unexpected happened and it created buzz not just around UBC, but throughout the rest of Vancouver as well. 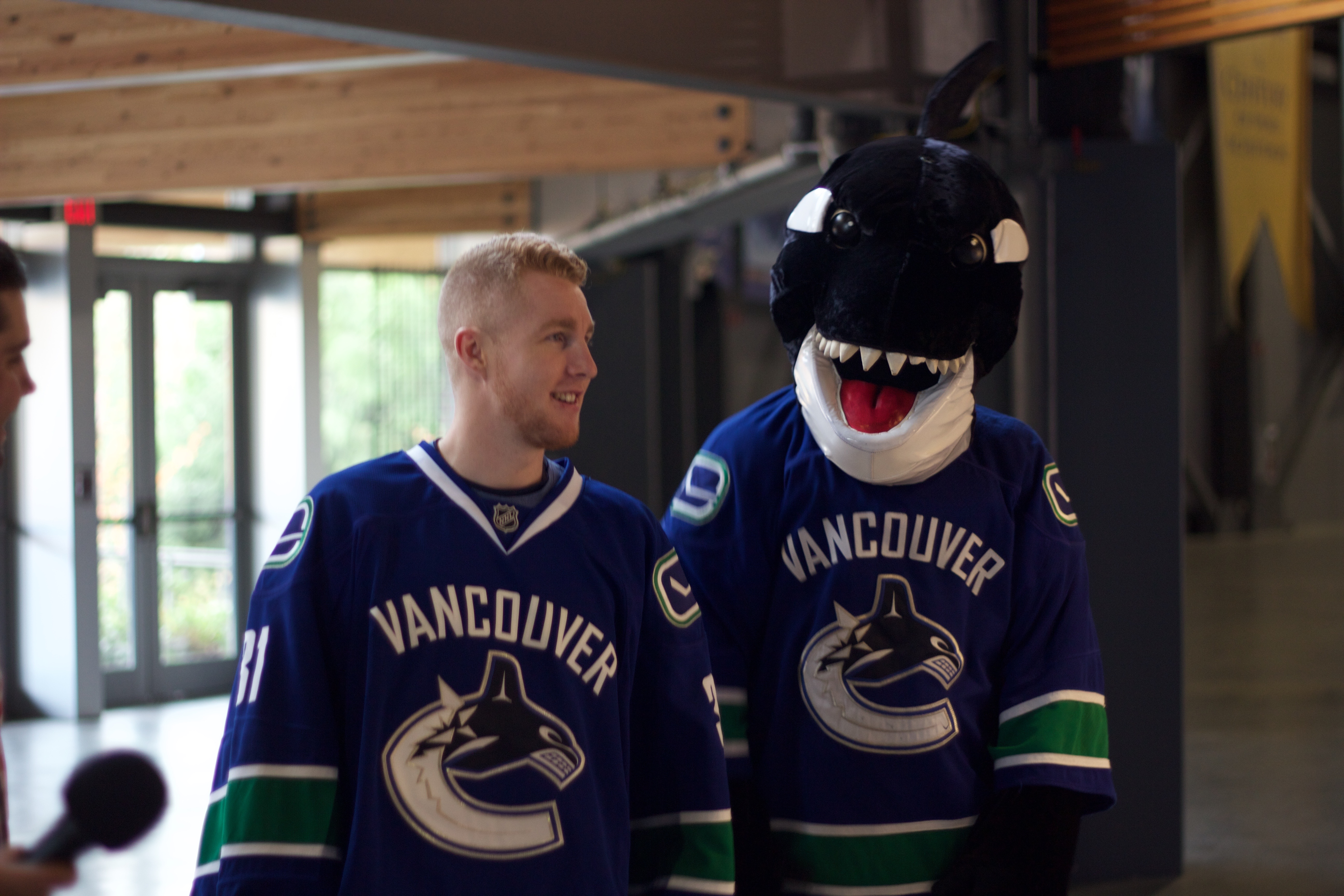 “Ever since I got the call and hits on social media, the hype has been unreal,” said Hewitt, the day after the game. “I’ve had lots of friends and family contacting me, and I think everyone in this city has blown this up as a good feel-good story.

“But I mean, the hype has been unreal, and I just used that as positive energy going into last night and just enjoyed the experience.”

Though Hewitt did not play, he did warm-up with the Canucks before the game. A memorable moment came during a drill in which he robbed Canucks forward Brandon Sutter.

“You’re going against the best in the business,” said Hewitt. “To be able to skate with those guys at Rogers Arena was just a great opportunity. To go head-to-head against these pro players is an experience of a lifetime, so I enjoyed it to my fullest ability.”

Hewitt could have gotten the opportunity to play in the third period. Halfway through the final frame, Blues forward Patrik Berglund crashed into Markstrom after a breakaway attempt. Thankfully, Markstrom was unharmed on the play and Hewitt was able to take a deep breath.

“You never know in any game, in any sport, when you might get the opportunity to play,” said Hewitt. “It was a little bit in the back of my mind — I was like, ‘Oh, this could be my opportunity.’

“But hockey’s a physical sport, so I knew he was going to be okay — which he was — so I was happy he was able to battle through and get the win at the end of the day.” 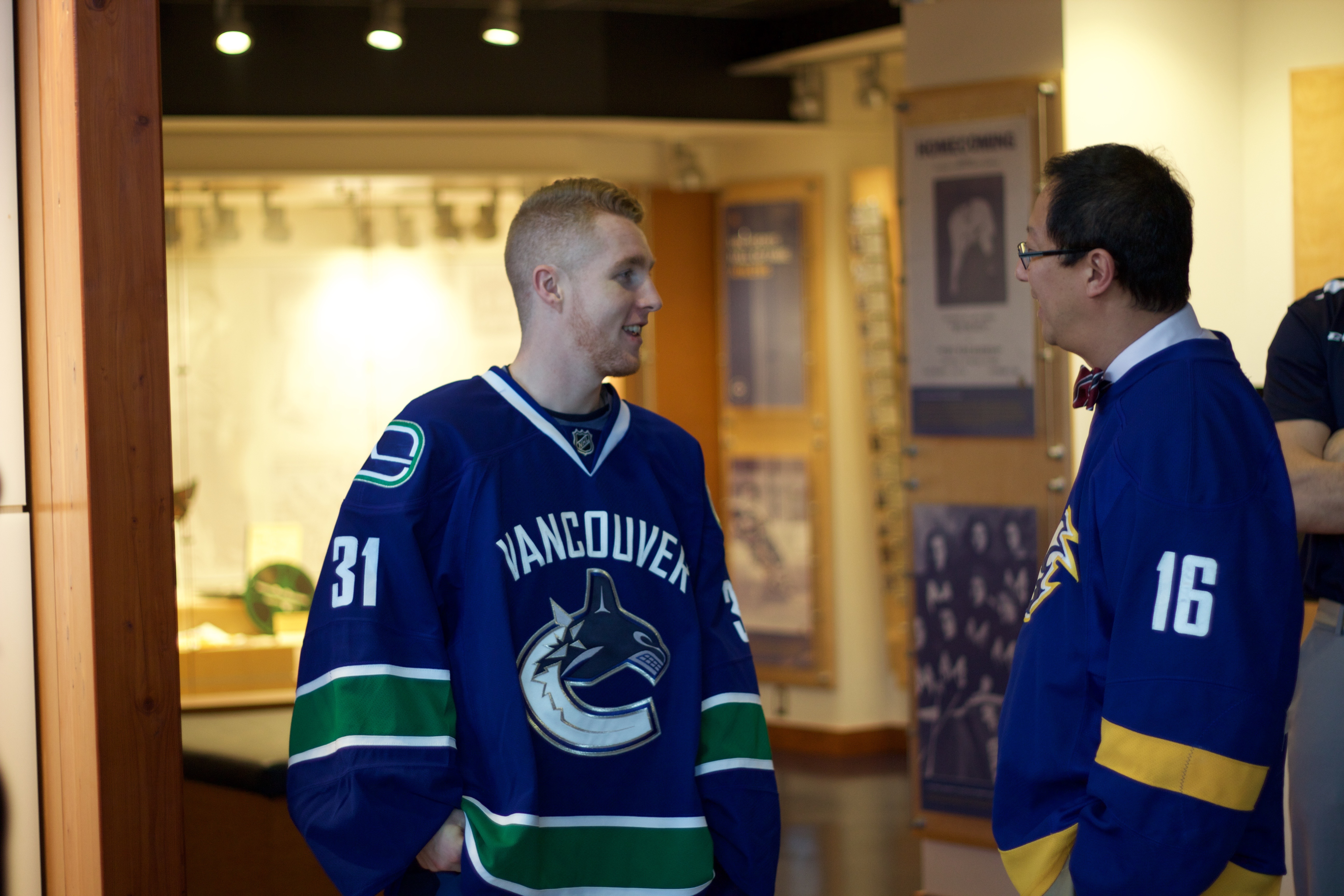 After everyone exchanged pleasantries, Dr. Ono laced up a pair of skates for the first time and hit the ice in an attempt to test Hewitt in goal. It took a few tries and a demonstration by Schaupmeyer, but Dr. Ono was eventually able to lay a couple of decent shots on Hewitt. Moreover, the contest with Dr. Ono wrapped up a fun 24 hours of new and exciting experiences for the 23-year-old goalie.

Hewitt has now shifted his focus to the rest of the Thunderbirds’ regular season.

“Yesterday was an opportunity of a lifetime and I’ll carry that with me for the rest of my life,” said Hewitt. “But my heart is with the Thunderbirds and I owe it to them to be here with my team.

“Yesterday’s now in the past, so I got to move forward and be ready for my team.”

The Thunderbirds will be looking to mend their 1-5 record on the road this weekend against the University of Manitoba Bisons.