With a close defeat to the Dinos, it was a heartbreaking Homecoming for UBC 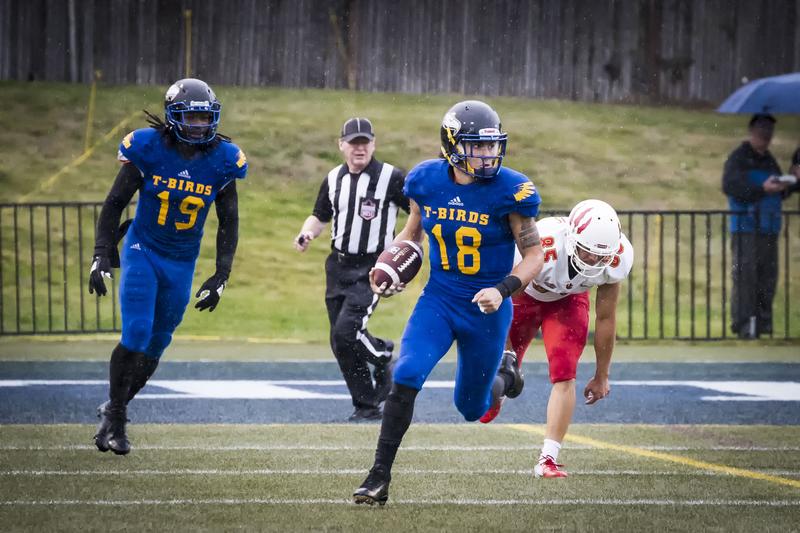 UBC fans braved the rain and cold, but an emphatic home crowd wasn’t enough for the Thunderbirds as they dropped their Homecoming game 32-28 to the Calgary Dinos on Saturday evening, extending their losing streak to three games.

“Fans were great, awesome to see the support from them. Even with the bad weather they still came out,” UBC quarterback Michael O’Connor said post-game about the 9,535 faithful UBC fans in attendance.

The ’Birds started the game sluggishly with a quick two-and-out on their first drive, but quickly regained their composure after a Calgary field goal when O’Connor connected with Marcus Browne on a 43-yard touchdown pass. Greg Hutchins tacked on three more points with a 41-yard field goal attempt, putting the T-Birds up 10-3 early in the game.

The Dinos, however, never let UBC out of their sights. The visitors collected points off a second field goal and a safety midway through the first half. 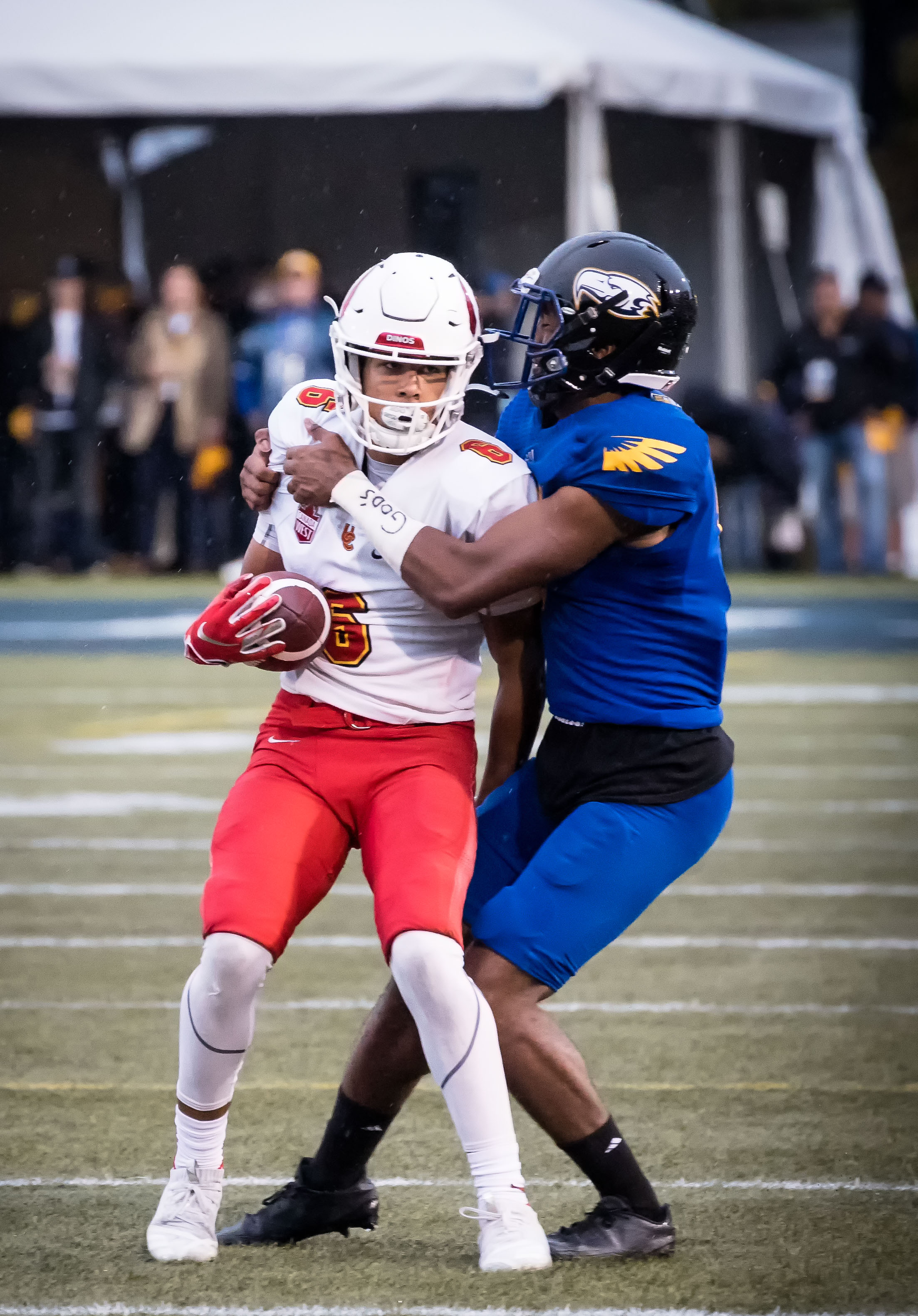 Determined as ever to overcome offensive struggles, O’Connor led a two-minute drill for UBC that culminated in a 43-yard touchdown pass to his favourite target: Trivel Pinto. Hutchins converted the extra point and UBC were rolling once again, up 17-8 at half-time.

The third quarter was largely quiet until the six-minute mark when Dinos kicker Niko DiFonte was successful on his third attempt of the day from 41 yards out. A couple of plays later, O’Connor threw an ill-advised pass into double coverage resulting in an interception. Calgary running back Robinson Rodrigues juked a visibly gassed Thunderbird defense for a 21-yard score.

Despite giving up the lead, UBC got the response they wanted from last years’ Canada West defensive player of the year, Stavros Katsantonis, who came up big with a 67-yard pick-six. An ensuing two-point conversion to Pinto had the home team back up 25-18 after three quarters.

After a drive that stalled in Calgary’s red-zone, Hutchins’ 12-yard chip shot put UBC up by double digits, making it a two-possession game. Unfazed by the challenge presented, Calgary quarterback Adam Sinagra put on a passing clinic and hit teammate Tyson Philpot for a 35-yard touchdown to pull within three of the ’Birds. Minutes later, Sinagra found Alex Basilis in a beautiful effort to evade pressure for a 10-yard touchdown.

Down four points with 1:22 left, UBC defensive end Connor Griffiths recovered a Rodrigues fumble to bring some life back into Thunderbird Stadium. Despite their best efforts, the T-Birds couldn’t convert a critical third-and-long, handing Calgary their fourth straight win at 32-28.

With the loss, UBC drops to 1-3 this season.

As the score suggests, this was a very winnable game for UBC — but that provides little solace in the aftermath. The ’Birds could easily be 3-1 if they had closed out their previous two games — losses by two and four points respectively. While the offense and defense certainly need to play better in crunch time, that’s not going to fix all of UBC’s underlying issues.

The biggest hurdle for the Thunderbirds this matchup, as it seems to have been all season, has been playing a clean game. As stated in The Ubyssey’s Homecoming preview article, one of the three keys to winning was playing with excellent discipline. The T-Birds were penalized 14 times for 152 yards on Saturday, well above their season average of 89 yards. You can’t expect to beat an elite opponent — or any opponent — after coughing up 150 yards in field position.

“These guys have to realize that you can’t win football games when you can’t play with discipline,” said UBC head coach Blake Nill post-game. 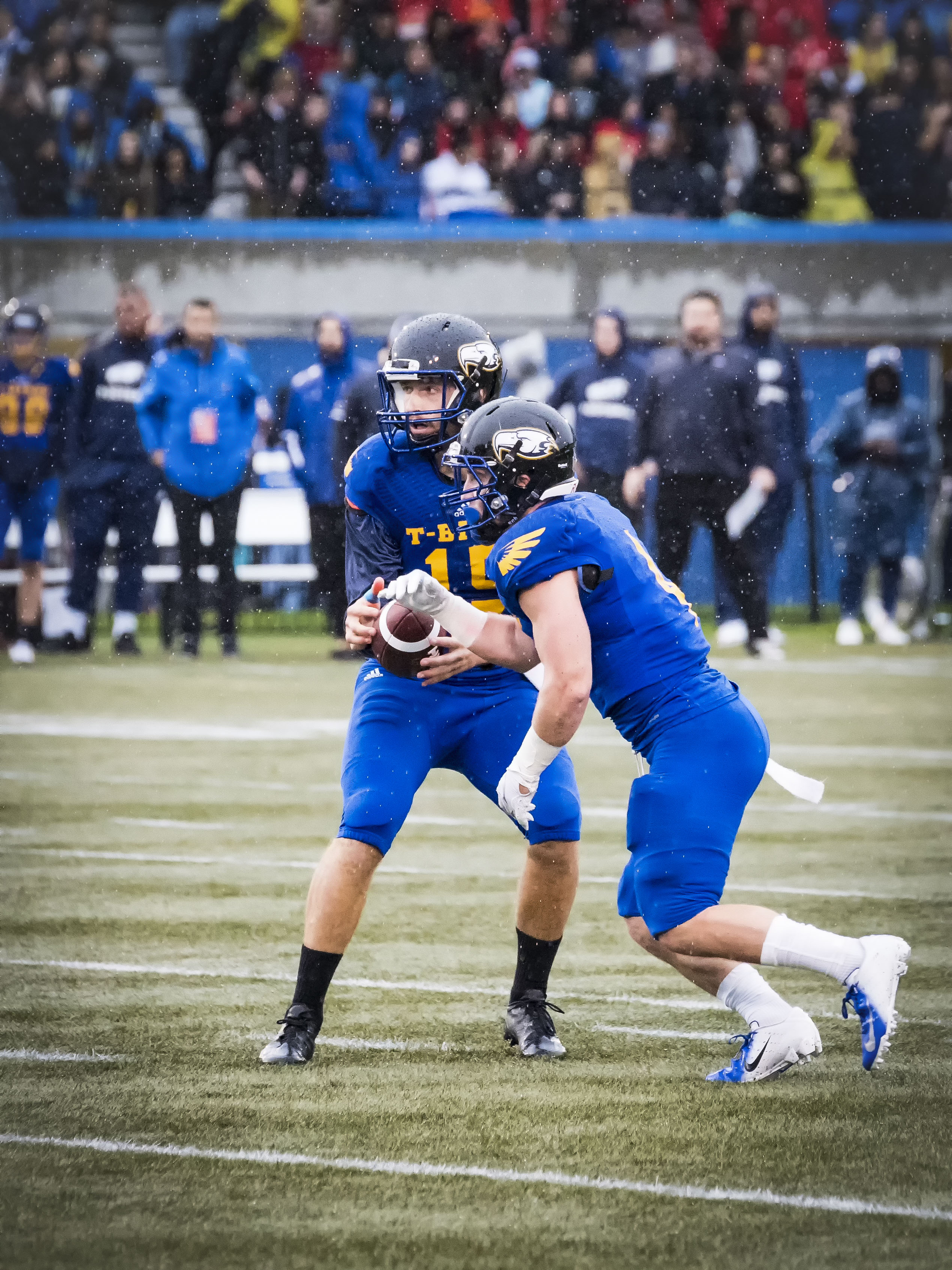 Michael O'Connor goes in for the hand off. Daniel Li

Similar to last weekend, UBC gave up a huge penalty inside the final two minutes. This time around, the secondary got flagged for pass interference on an incomplete Sinagra pass on second-and-long. Pat Tracey, UBC’s defensive coordinator, was livid on the sidelines and rightly so — had it not been for the subsequent fumble recovery, that penalty would have cost them the game.

The blame for a stagnant fourth quarter offense — that scored zero touchdowns — was shared.

“We just got to execute. I got to make better throws, you know, it starts with me,” said O’Connor, who finished the game 26-40 with 330 yards, two touchdowns and a pick.

“Just mental mistakes … we’re dropping the ball, not making enough plays on our side and it’s costing us games like this,” added Pinto when asked about what problems he saw throughout the evening. The wideout posted 13 reception for 162 yards and a touchdown on the night.

While it’s valiant of the offensive stars to defend one another, both O’Connor and Pinto (along with the running game) played well enough to win the game. Simply ‘playing better’ is an easy answer, but it’s difficult to trump the aforementioned numbers against top teams like Calgary. Simply put, it’s time to stop self-sabotaging with unnecessary penalties.

On a positive note, the re-emergence of Ben Cummings opened up the field for downhill play, which was something UBC was missing previously.

The defense also played a respectable game, but you can’t get too optimistic when you allow the opposition to score 32 points. Yes, the Dinos have the league’s best offense and they controlled the ball for 32 minutes, but you have to rise to the occasion and overcome difficulties to win. The defensive line failed to control the line of scrimmage — another one of The Ubyssey’s “keys” — in the latter phases and that led to scoring opportunities for Calgary.

There were silver linings, however: safety Stavros Katsantonis came up with a pick six off an intuitive read, Ben Hladik was once again a tackling machine, Connor Griffiths recovered a late-game fumble and Malcolm Lee shut down Calgary’s deep passing game.

“Malcolm Lee had one of his best games as a member of UBC. He was locked up on a tough kid and they threw a lot of deep routes at him,” Nill praised.

Looking forward, UBC will face the University of Alberta Golden Bears, who are 0-4 halfway through the season. If the ’Birds want playoff football this year, this will be a must-win game.