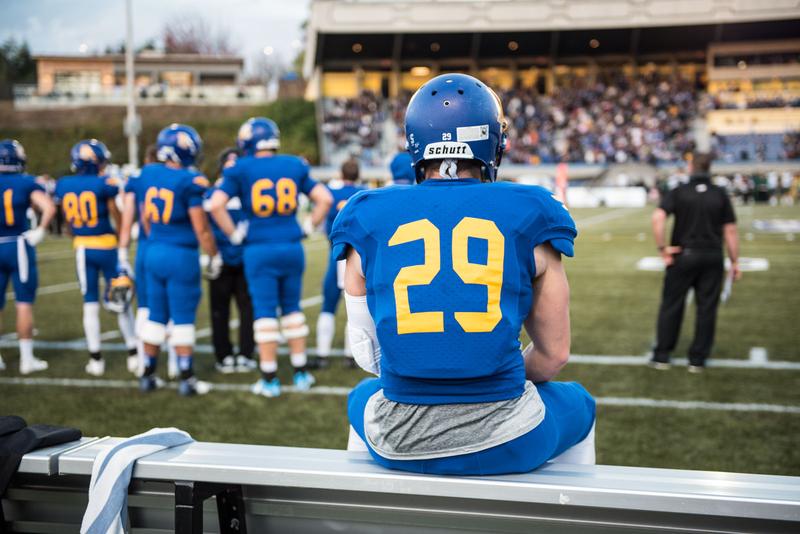 With the forecast anticipating showers, it was uncertain whether rain would affect the turnout of Homecoming. Fortunately, the rain dissipated, allowing 7,834 fans to enjoy watching the Thunderbirds football team take on the Regina Rams under the warm BC sun.

There were food trucks, beer tents, games and various booths set up for companies doing promotions such as BMO, MasterCard and the Vancouver Canucks. Attendees were also entertained with a special appearance by UBC president Dr. Santa Ono, the theatrics of mascot Thunder and countless giveaway prizes.

This year's attendance beat last year’s record-breaking attendance of 6,950 by a respectable margin. And when you compare these numbers with other UBC sports, football definitely has the edge. Last year’s CIS Final 8 quarterfinal match between the men’s basketball team and Ryerson had an attendance of 4,750, while the men’s hockey team’s Winter Classic drew 3,577.

Say what you want about UBC school spirit — the organizers did an excellent job promoting the game and the hard work paid off. This event undoubtedly saw one of the biggest crowds in UBC sports history.

What a day! Thank-you to amazing crowd that came to celebrate the T-Birds: https://t.co/Vta37mdVWZ #UBCHomecoming pic.twitter.com/fPV2wOYMlr

The ’Birds did not take long to get the crowd going. They scored a touchdown in the first half and went into the halftime break 10-3.

However, that was all the ’Birds’ fans had to cheer for. The Rams went on to play a strong second half and ended up winning the game 20-10. The result of the game left a bitter taste in what was otherwise a spectacular event.

The fact is that this game was lost on mistakes. The biggest mistake came in the third quarter, when the Thunderbirds were third and goal with the game tied 10-10. A field goal would have given them the lead with lots of time left to build on it. Instead, Blake Nill’s team elected to go for it and ultimately lost the gamble on an incomplete pass from quarterback Michael O’Connor to receiver Will Watson.

UBC needs to take the points in this scenario. Because they took the gamble and lost, it completely changed the momentum of the game. After the turnover on downs, it didn’t take Regina long to run the ball all the way down into the ’Birds’ end zone. The mistake cost UBC three points and gave the Rams an all-important touchdown that gave them their first lead of the night.

The mistakes didn’t end there. Shortly after the Regina touchdown, UBC kicker Greg Hutchins fanned on a punt, sending the ball just 13 yards up field, giving the Rams an excellent field position in the Thunderbirds’ half. This led to a Regina field goal and ultimately put the game to rest.

All in all, Homecoming 2016 was quite the spectacle. Too bad the ’Birds weren’t able pull-off a victory for their unbelievable crowd.