‘Be that monster’: Keylyn Filewich is the head of UBC’s offensive beast 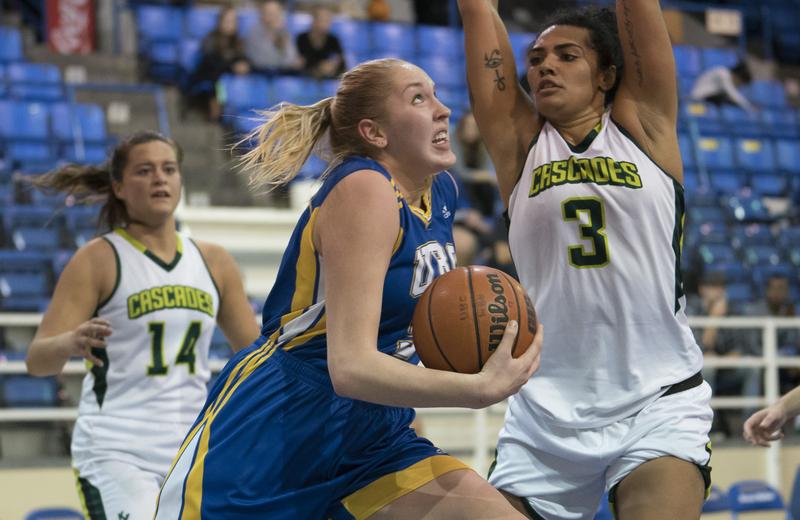 Filewich sets up for a lay up against the University of Fraser Valley Cascades Shayna Litman. Courtesy UBC Athletics

Keylyn Filewich — powerhouse of the UBC women’s basketball team — seems shy when you first see her warming up. She shatters that perception the moment she steps on the court to play, a danger for opponents and a force to be reckoned with as a part of the Thunderbird’s offensive core alongside Jessica Hanson and Maddison Penn.

The second-year science student is an asset to UBC’s 2017-18 Canada West campaign — particularly lethal in her opponent’s key. She is fifth in the league in scoring, with 149 points. Her field goal percentage at 52.9 is sixth highest in the country.

These numbers shade her trepid path into the sport. Despite being a basketball child — both her parents played basketball for the University of Manitoba Bisons — she wasn’t always crazy about it.

“I never really liked it,” said Filewich of her start in basketball. “[I] didn’t start playing competitively until grade eight when I played [on the] provincial team.”

She didn’t even think she was good until sixth grade. According to Filewich, her gym teacher that year was the first to pick up on her skill. “He was the one that first noticed … and said ‘you’re really good at this. You should really pick it up outside of school.’”

She played multiple sports through her sports career. In grade nine, she was playing basketball, volleyball and hockey — all competitively. As many high performance athletes do, she whittled it down to volleyball and basketball and then eventually, once she had to pick one sport to focus on, chose basketball. A nationals run in 2011 with the Manitoba provincial team helped with that choice.

“When I went to nationals and saw all the teams and the competitive nature, and just kind of the big show, it kind of opened my eyes to what it could be,” Filewich said. Three years later, with Filewich on the team, Manitoba won nationals.

That growing love for competitive basketball was a key reason why she chose to attend UBC. As she explained, Canada West has more teams compared to leagues like the Quebec Student Sport Federation (RSEQ) which has five teams playing each other repeatedly. She also wanted to play under the tutelage of legendary UBC head coach Deb Huband.

“Just the legacy that [Huband] has built here. It’s incredible what she has done. I’ve always wanted to be part of something like that,” said Filewich. “I’m hoping to help her bring home another national championship in my five years here.”

Another reason why she chose UBC was because of its academic reputation. Filewich was a high flyer in high school, maintaining a 96 per cent overall average. She said she wanted her university decision to be “a school choice as much as it is a basketball choice.”

“I didn’t want to be just an athlete or just an academic. I want to be good at everything.”

Deciding to go to UBC was a break from tradition, considering both her parents went to the University of Manitoba. But they saw that she wanted to do something different for university.

“Even my mom’s sister played [for] U of M, so it’s all in the family. But they also understood that I wanted to go away and they really like UBC. They’ve been to Vancouver so many times now and they really enjoy it.”

Filewich had always been a role player — a supporting player who can fill the team’s needs — but in her later high school years and this season, she has had to be a top scorer.

“Before I just did the rebound, played defence, and was just that solid player that you could always count on,” said Filewich. “Now, it’s kind of new for me in stepping up into this kind of role and being a scorer.”

In her first year at UBC, Filewich didn’t start. She mostly came off the bench to rest the starting forwards. Adjusting to a game as a substitute when everyone on the court was already in tune to the rhythm of the game was difficult.

“It was hard adjusting to that role and then through the year I just got ... better and ... more confident coming off the bench and just going in there, doing my role … [Huband] believed in me and she said ‘don’t worry, this role is important’ and so I just kind of focused on that,” Filewich said.

“Every day my dad would always tell me ‘as long as you rebound and play good defence, you can’t have that bad of a game.’ So that’s kind of what my mentality was.”

“She had some pretty good games ... and was a Canada West all-star in her rookie year,” UBC head coach Deb Huband said of Filewich after the team’s 2017 home opener against the University of Fraser Valley Cascades. “She’s young, she’s a strong player now and she’ll be [an even] stronger player as she gains more experience.”

Now, as a second year, Filewich is a veteran on a relatively young team. It’s one of the youngest teams that head coach Deb Huband has seen. 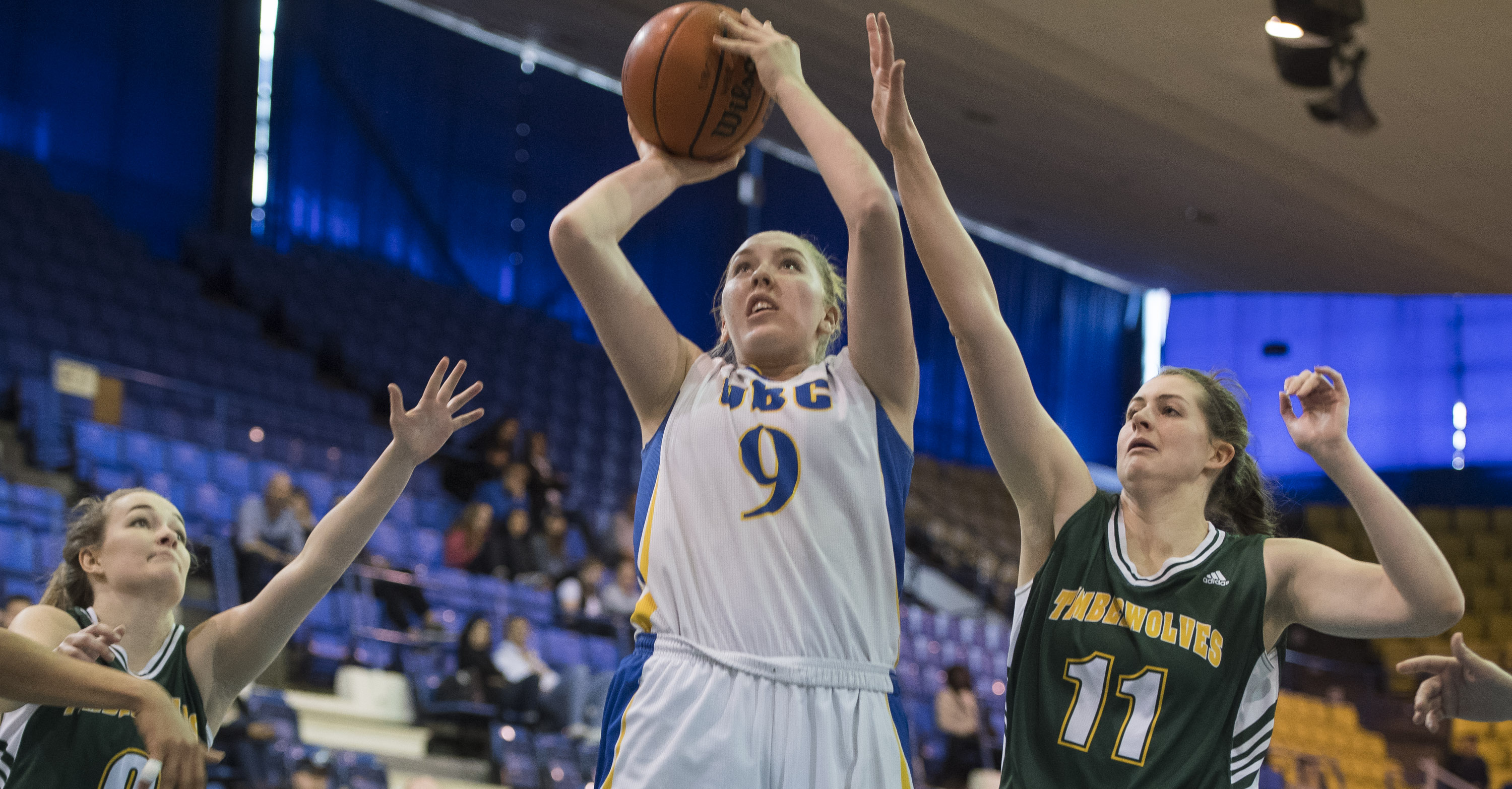 Filewich sets up for a shot against the UNBC Timberwolves. Courtesy UBC Athletics

“We can’t be looking over our shoulders thinking that anybody else is going to get the job done. Everybody has to take that on their own shoulders and bring it every single game.”

This game plan requires Filewich to fill particularly big shoes — those of Kara Spotton, Andrea Strujic and Susan Thompson, graduated players from last season — while moving from substitute to starter.

“It’s been a lot of learning this year. We’ve been talking as a team about growth,” said Filewich. “We’ve had to do it quickly because we’re so young but I think [Huband] said ‘no matter what, as long as we’re growing, we’ll become a good team’.”

So far, the young ’Birds have managed a 4-6 record in Canada West. Still, the team hasn’t had good starts in their games and have been inconsistent at key moments. Going forward, Filewich understands she will be occupying a big leadership role as the team grows.

“I’m not the most vocal person … I won’t just be the one to speak and ... to cheer everybody [on] and talk a lot, but I ... hopefully lead by example, and that’s something I am trying to grow,” said Filewich. “Being that person that gets to talk to everybody and is close with everybody, and that’s kind of a work in progress still.”

“[Huband] would always tell me like, ‘get your swagger’,” Filewich said, laughing. “She’s like ‘be that monster … I want you to be a monster out there.’ That’s kind of been a big challenge.”

For her own game, Filewich said she has gained confidence. She is also fitter now — and playing 30 minutes and above, you have to be.

“You can’t be gassed the whole time. You can’t be tired, huffing and puffing up the court. So making sure that my fitness was up was a thing I focused on over the summer.”

For Filewich, settling into her expanded role has meant trying to broaden her skillset so she can be a threat in whatever position she finds herself. The coming year will be significant as it will be a test on how much she can grow into the player her team needs.