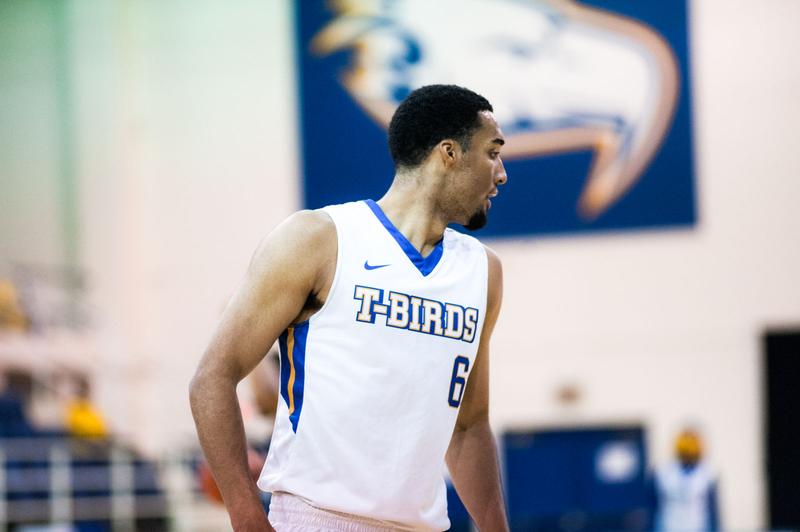 Carrying the momentum from a perfect 7-0 start, the Thunderbirds crushed their sister school and rival, the UBC Okanagan Heat, 96-49 in a Saturday game that showcased their strength in number and defensive prowess. The ’Birds shot an overall 56 per cent while nailing 50 per cent of shots from downtown with three of their players scoring in double-digits.

The Heat could not figure out a way to score and Browne’s four-point play extended the lead to 25-11 as the first quarter clock winding down.

The ’Birds' athleticism and size wreaked havoc on both ends of the floor as they scored at ease in the paint and getting stop after stop on the defensive end. The ’Birds' depth was evident in the second quarter as well. The bench players kept the lead and performed extraordinarily on defence, as they forced multiple 24-second violations and turnovers.

A scary moment occurred when the Heat’s Noma Obaseki went down after being inadvertently hit in the eye by A.J. Holloway. Obaseki got up shortly and wobbled to the bench with the crowd cheering for his effort.

Aldrich Berrios of the Heat launched several comebacks by hitting threes and mid-range jumpers. However, each attempt was stymied by aggressive T-Bird counterattacks, one of which resulted in a basket-shaking, thunderous dunk by the ’Birds' leading scorer Conor Morgan.

The home team utilized full-court pressure at the end of the second quarter to blow out the Heat’s hope of narrowing the gap before halftime. It forced the Heat to turn the ball over as the clock winded down and led to an unbelievable half-court buzzer beater by Phil, making it 53-38 at halftime break.

“The defence was great. Other than a few setbacks in the second quarter, we played really good defence ... And you wanna get better and better every time you do it. I see it as a progress,” said fifth-year guard Jordan Jensen-Whyte.

The Heat picked up a notch in the second quarter and seemed to be better at penetrating the air-tight Thunderbird defence. But the advantages held by the ’Birds were evident, as they continued to dominate the game and controlled the pace for most of the first half. It seemed like this was going to be another blowout.

In the third quarter, both teams seemed a bit tired and the pace slowed down. There were sloppy plays from both teams, as possessions kept changing hands. The score table didn’t change until Jensen-Whyte hit a layup underneath the basket with a pump-fake. The ’Birds' defence started to wear down the Heat.

The physical dominance was even more evident in the second half, as the Heat was held to only 11 points in the entire second half of the game. The T-Birds kept getting buckets in whatever way they liked, whereas Heat players threw one brick after another in the face of the stifling UBC defence. Full-court pressure from the ’Birds forced consecutive turnovers from the Heat and turned the majority of them into points on the other end.

With the final score at 96-49, the Thunderbirds extinguished the Heat to remain undefeated as they go into the winter break.