“The funny one”: Maddison Penn keeps it light on the women’s basketball team 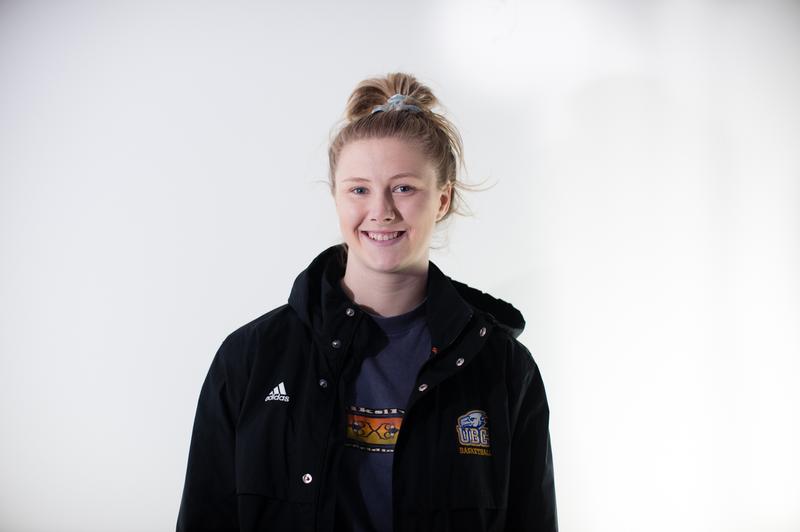 “This is my third, first year of university,” said Maddison Penn.

Penn, one of the star basketball players at UBC this year, sat in the historic War Memorial Gym on a rainy Saturday after her morning practice session. She beamed cheek-to-cheek and spoke with her thick Australian accent, explaining how she has managed to go to three different universities as a first-year student.

“Hopefully this will be my last one,” she said with a laugh.

Indeed, the 6’1 guard has had quite the experience. She has played for the under-19 national team for Australia — a team that finished first-place at the 2012 FIBA Oceania Championships and third at the 2013 FIBA World Championships. Penn also played in 25 games for the Virginia Tech Hokies in their 2013/2014 NCAA season, and has been a staple on the UBC roster this past season.

The road to this impressive career in basketball started from a young age. “I was in grade one, and my best friend didn’t have enough players on his team,” she recalled. She was the only girl in an all-boys team in primary school. “I’ve been playing ever since — it’s so much fun.”

Basketball wasn’t the only sport that Penn experimented with. “I’ve literally played every sport under the sun,” she said.

She rowed, swam and did cross-country in high school, but it was “shooting hoops” where she truly found her calling.

“I think [shooting] is just really fun to master, I find it strangely therapeutic.”

Penn decided to pursue basketball full-time when she received a phone call in grade 12 from the Australian national camp.

“I remember shooting in the gym at boarding school,” she said. “I'd never gotten an acknowledgement of that sort and I just knew this is what I had to do.”

It is her humility that really makes her stand out.

She averaged 18.1 points per game in the regular season — the second-highest total in Canada West behind the 18.7 per game by Winnipeg’s Antoinette Miller. She has played for the Australian national team and she and has scored 33 points in a single game.

Despite these veritable feathers in her athletic cap, after our chat she wrote in an email, “What made you choose me?”

She calls herself the “funny one” on the team — the one who makes all the jokes and keeps it light. Her knack for comedy might stem from her love of British sitcoms. Penn credits her dad for introducing her to The Young Ones (UK), Black Books (UK) and the British comedy troupe, Monty Python.

“I think my dad was the biggest influence on my taste in music, film and TV,” she mentioned.

“Whenever someone asks me who my favourite athlete is, I get confused,” she said. “I mean, I can tell you my favourite comedian?”

Her reason for coming to UBC was simple: “Honestly, I was bored,” she answered jokingly.

In reality, it was the kinesiology program and the people that attracted her. “I’ve always wanted to be a teacher, and just help people,” she said of her plans to become a sports instructor in the future, and teach like her mother.

Her mother, who is a physical education teacher, is the major source of inspiration for Penn. “I remember her coming home with all these stories,” she reminisced.

She realized that this was her dream when she had the opportunity to teach students in Sydney for a three-week course, shortly after her time with Virginia Tech.

“Just teaching those kids really got me going.”

For Penn, the next thing on the horizon is on the horizon, literally. She has played basketball and won titles for teams in Oceania and North America and now wants to conquer Europe.

“I don’t care what division it is, I just want to have that on my resume as well.”

And with her track record, there is no doubt she will do just that.