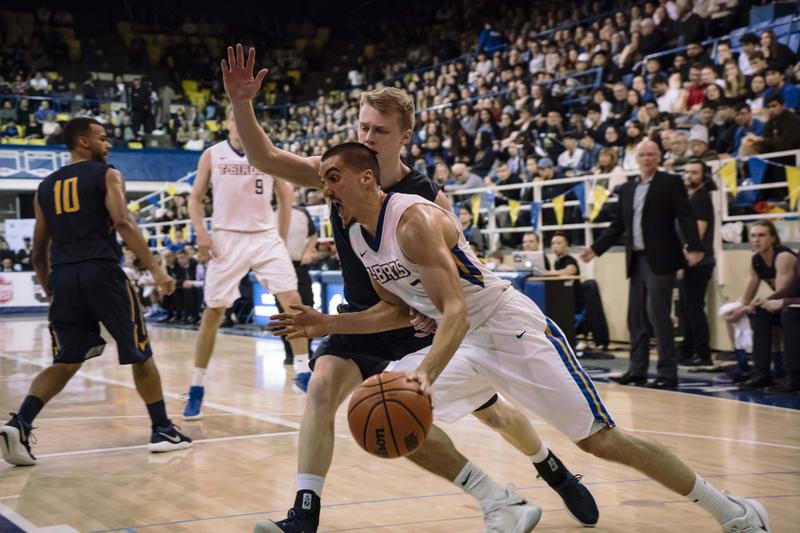 In the second and final game of the Courtside doubleheader, following the earlier women's game, the UBC Thunderbirds men's basketball team pulled out a victory for the memory books against the University of Victoria (UVic) Vikes: a 109-68 pummelling.

It was also the last regular season game for seniors Phil Jalalpoor, Conor Morgan and Luka Zaharijevic, who are all in their final year of eligibility.

“Phil [Jalalpoor] put on a special performance, Conor [Morgan] did his thing and so did Luka [Zaharijevic], and to do it in front of the home crowd, in front of friends and family, is very special,” UBC head coach Kevin Hanson said post-game of his team veterans.

Prior to Friday's match up, the ’Birds came out with a similar scoreline in their away game against the Vikes, defeating their BC rivals 95-69 — the odds seemed heavily in their favour going into Courtside.

The opening frame saw Vikes guard Mason Loewen hit two quick threes as UVic took a 14-5 lead. After burning an early time-out, the T-Birds ran a full court press and managed to spur a 11 point run to get back up to pace. Despite their firepower, UBC’s leaky defence and inability to box-out had them down 42-40 at the half.

The second half began with 15 points from Jalalpoor, who hit three consecutive triples in the process. It was obvious the ’Birds had tightened up their defence, with a mix of 2-3 zone defence to help secure the interior, and man-to-man marking to protect the perimeter of the court. Feeding off their stingy defence, the Thunderbirds were able to find the open man in transition — leading to 74 per cent in shooting through the third quarter.

After a 37-point third frame, in which the T-Birds led UVic 79-52, the home team cruised to victory, sweeping the Vikes in the final night of their regular season. The ’Birds finished the game ahead by over 40 points at 109-68.

Aggressiveness and resilience seemed to be key for a Thunderbird win after a less than stellar first half.

“We started boxing out better, and once ... we get out to run it’s easy. So that was kind of our game plan in the second half, tighten up on defence and start picking up the pace,” Jalalpoor said.

“We just talked about keeping it positive and keeping the positive energy there. Phil [Jalalpoor] came out and had an incredible third quarter. Once he got going, the confidence of the team started to gel and it was a pretty impressive performance by him and I think everyone else,” Hanson said.

UBC can now look forward to the Canada West playoffs as they finish the regular season in second place in the conference; according to the RPI rankings in Canada West, that puts the ’Birds as the third seed going into playoffs. UVic, on the other hand, heads into the post-season ranked ninth in the West.